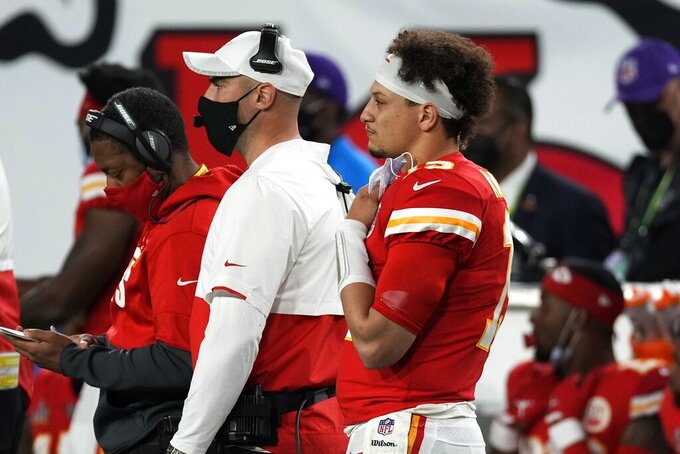 What made the Chiefs' Patrick Mahomes one of the best quarterbacks in the NFL over the past three years had been his uncanny ability to quickly read the defense, settle on the right read and allow his otherworldly arm do the rest.

The Buccaneers didn't even give him time to skim their defense in the Super Bowl.

Whether pushing around the makeshift Kansas City offensive line or blitzing what had been the best QB against the blitz all season, the defense of Tampa Bay coordinator Todd Bowles made life miserable for Mahomes on Sunday night. He was 26 of 49 for 270 yards and two interceptions in a 31-9 blowout that denied the Chiefs back-to-back titles.

“That's the worst I've been beaten in a long time,” Mahomes said, “but I'm proud of the way the guys fought.”

It was the first time Mahomes, who led the Chiefs to their first championship in five decades last season, lost a game he started by more than one possession since Nov. 19, 2016, when Texas Tech fell 66-10 to Iowa State.

Just like that night, Mahomes was left hobbling off the field, the beating he endured from Tampa Bay capping a playoffs in which he sustained a concussion against Cleveland and a turf toe injury that will likely require surgery.

“They had a good game plan,” said Mahomes, whose quarterback rating of 52.3 was by far the worst of his career. “They took away all our deep stuff. They took away the sideline. They did a good job routing to the football and making tackles. We weren't executing early. I had some miscues. Guys weren't on the same page.

The biggest reason for his struggles, though? The only player on his offensive line in the same position he started the season was Austin Reiter, and the center didn't fare a whole lot better than the rest of his teammates.

Guard Kelechi Osemele tore up both of his knees early in the season. Right tackle Mitchell Schwartz hurt his back midway through the year. Left tackle Eric Fisher tore his Achilles tendon in the AFC title game. And all that happened after Laurent Duvernay-Tardif and third-round pick Lucas Niang opted out because of COVID-19.

Their replacement offensive line of career backups and journeyman was no match for Tampa Bay's cavalcade of stars.

“We just weren't on the same page,” Mahomes said. “I wasn't getting the ball out on time. The receivers were running routes not exactly where I thought they would be at, and the offensive line — they were good sometimes and sometimes they let guys through. When you're playing a defense like that, you have to be on the same page.”

The Buccaneers set the tone against the Chiefs on their opening defensive series, when Shaq Barrett went unblocked to help foil the drive. Later in the quarter, Jason Pierre-Paul got his big mitt on a pass to help force another punt, and Barrett was at it again by forcing a throwaway that led to Kansas City's second field goal later in the first half.

Mahomes came into the game with 17 touchdown passes and no interceptions against extra pressure this season, but he missed his first six throws with an interception against the blitzing Buccaneers on Sunday night.

The first time Mahomes did have time to throw? Travis Kelce dropped a third-down pass.

The first-half numbers were striking: Mahomes was 9 of 19 for 67 yards, while Tampa Bay counterpart Tom Brady had dominated the Chiefs defense for 140 yards passing and three TDs in staking the Buccaneers to a 21-6 lead.

“Listen, Todd had a good plan,” Chiefs coach Andy Reid said, “but I could have done a whole lot better job of putting these guys in a better position to make plays. My guys busted their tails. It just didn’t work for us.”

Tampa Bay soon pushed the lead to 28-9 and Kansas City's potent offense was powerless to answer.

Barrett ran right through left tackle Mike Remmers for a sack early in the second half, and more pressure led to Mahomes chucking up a pass that was picked by Antoine Winfield Jr. In the fourth quarter, Mahomes was flushed so far out of the pocket on fourth down that he had to heave the ball about 50 yards just to get it to the end zone.

The ball wound up bouncing off running back Darrel Williams' facemask and falling to the turf incomplete.

“To the last snap,” Reid said, “he was trying to win that football game.”