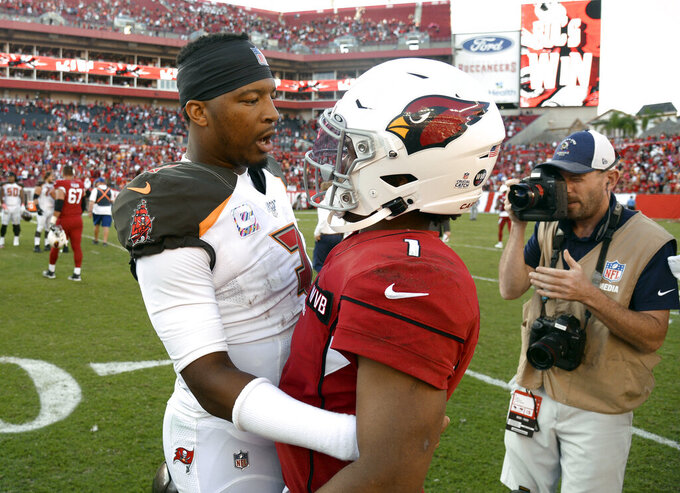 TAMPA, Fla. (AP) — Now that Tampa Bay has stopped a four-game losing streak, the next challenge for the Buccaneers is finding a way to win two straight.

That's been a daunting task for a young team in its first year under coach Bruce Arians.

All season long, the Bucs (3-6) have undermined their chances for success with turnovers, untimely penalties and a knack for not making basic plays that can be the difference between winning and losing.

Sunday's 30-27 victory over Arizona was especially gratifying because for the first time in more than a month, the offense and defense both overcame critical mistakes to win for the first time since the team played possibly its best game of the season in beating the Los Angeles Rams 55-40 on the road.

"This could turn it around for us," second-year defensive tackle Vita Vea said.

"This is what we needed. We needed a big win," said tight end O.J. Howard, who returned from missing two games with a sore hamstring to catch four passes for 47 yards and a touchdown. "It's all about confidence."

A week after playing poorly in the first extensive playing time of his career, rookie cornerback Jamel Dean rebounded to end Kyler Murray's streak of 211 consecutive pass attempts without an interception and set the stage for Jameis Winston to lead a six-play, 92-yard scoring drive that gave Tampa Bay the lead for good with 1:43 remaining.

Winston shrugged off throwing two more interceptions to boost his NFL-leading total to 14 with help from a defense that allowed 417 yards but minimized the damage caused by three turnovers by keeping Arizona from scoring after two of them.

"We had so many close games that we couldn't finish," linebacker Shaquil Barrett noted, "and we were finally able to finish one."

The Bucs have led entering the fourth quarter in three of their six losses.

They've also not played well the week following victories, blowing an 18-point, second-half lead in a 32-31 home loss to the New York Giants on Sept. 22 and falling behind by two touchdowns early in the second half before falling 31-24 at New Orleans on Oct. 6.

They'll take a crack at winning consecutive games the first third time when they host the NFC South-leading Saints next Sunday.

Despite turning the ball over 12 times in the past five games, Winston continues to make strides in what essentially is a season he needs to prove he's Tampa Bay's long-term solution at quarterback. The No. 1 overall pick from the 2015 draft, making nearly $21 million in the final year of his contract, has been especially effective lately in the Bucs' two-minute offense. He led long TD drives in the closing minutes of the first and second half the past two weeks against Seattle and Arizona. "Right now ... I don't know of anybody playing better in two-minute in the last three or four weeks," Arians said.

A porous secondary remains a work in progress. Murray threw for 324 yards and three TDs, however Arians was encouraged by the way Dean responded and by the play of fellow rookies Mike Edwards and Sean Murphy-Bunting. "All those young kids in the secondary are getting better and better," the coach said.

Howard, a first-round draft pick in 2017, has been underutilized this season. He was targeted seven times against the Cardinals and had his first TD reception. With 17 receptions for 223 yards, he's fourth on the team in catches and third in receiving yardage.

CB Vernon Hargreaves III was benched during the second half against the Cardinals for what Arians described as a lack of hustle.