Bucs, Brady look to return to Super Bowl after loss to Rams 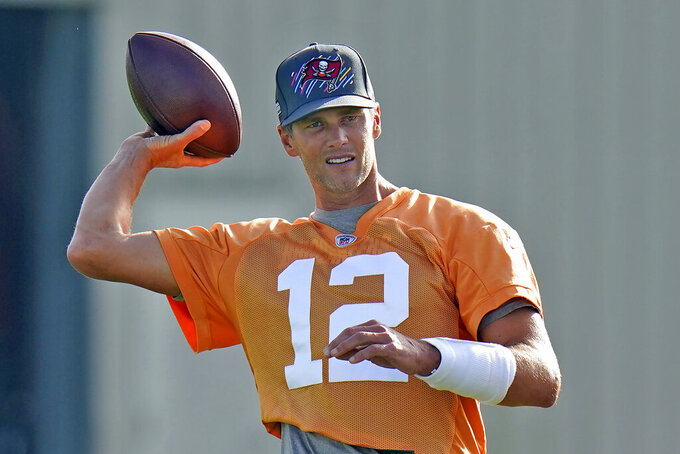 FILE - Tampa Bay Buccaneers quarterback Tom Brady throws a pass during NFL football training camp, Thursday, July 28, 2022, in Tampa, Fla. When Brady announced he was ending his brief retirement and returning to the NFL for a 23rd season, Leonard Fournette wasn’t caught off guard. Brady, who turned 45 a week into training camp, cited “unfinished business” as one of the reasons for changing his mind. (AP Photo/Chris O'Meara, File)

Weaknesses: Injuries decimated the offensive line during training camp, spawning questions about how well the Bucs will be able to protect the 45-year-old Brady. C Ryan Jensen went down with a knee injury on the second day of camp and is sidelined indefinitely. Aaron Stinnie, the top candidate to replace the retired Ali Marpet at left guard, suffered a season-ending knee injury during the second preseason game. Barring a decision to seek help from outside, second-year pro Robert Hainsey is the leading option to open the season at center, with rookie Luke Goedeke and second-year pro Nick Leverett competing to replace Stinnie at left guard.

Camp Development: Under usual circumstances, the team’s offensive line situation would be the summer's biggest story. But Brady, who announced his retirement in February only to reverse field six weeks later, instead dominated headlines with what Bowles described as a pre-planned break from much of camp for personal reasons.

Fantasy Player To Watch: With Godwin recovering from knee surgery and No. 1 receiver Mike Evans looking to extend his NFL record streak of consecutive 1,000-yard seasons to begin a career to nine, it could open the door to a healthy Jones rebounding from subpar seasons the past two years, when he was slowed by injuries with Atlanta and Tennessee.

Expectations: Brady cited “unfinished business” as one of the reasons for ending his brief retirement, and the Bucs remain committed to trying to surround him with everything the seven-time Super Bowl champion needs to win an eighth ring. In addition to acquiring Jones and Rudolph, general manager Jason Licht signed Hicks to replace Ndamukong Suh on the defensive line, traded for former Patriots OL Shaq Mason to fill an opening at right guard and re-signed Godwin, Jensen, Fournette and CB Carlton Davis. The Bucs are coming off setting a club record for regular-season victories (13) and winning the NFC South for the first time since 2007. Anything short of hoisting the Lombardi Trophy for the second time in three years will be a disappointment.