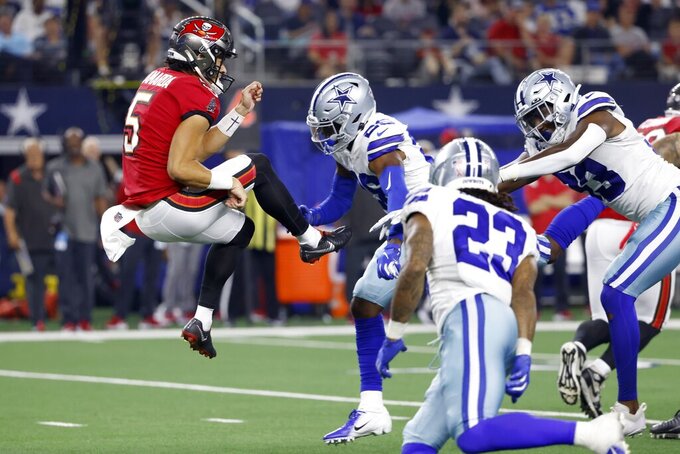 Tampa Bay Buccaneers punter Jake Camarda (5) follows through on a punt as Dallas Cowboys cornerback DaRon Bland (26) runs into him in the second half of a NFL football game in Arlington, Texas, Sunday, Sept. 11, 2022. (AP Photo/Ron Jenkins)

ARLINGTON, Texas (AP) — Tampa Bay Buccaneers punter Jake Camarda kicked a ball into the video board hanging high above the field in the Dallas Cowboys' home stadium Sunday night, then got run into when he kicked again.

That strange sequence in the third quarter led to Camarda punting on three consecutive snaps. The last one, a booming 63-yarder into the end zone for a touchback, was the only one that counted.

His initial punt hit the 60-yard long video board and was treated as an inadvertent whistle, basically a non-play.

On the re-kick, the Cowboys were penalized for running into the punter, a 5-yarder that wasn't enough for a first down. But the Buccaneers opted to take the penalty and kick yet again.

It was the first Tampa Bay punt of the game, with the Bucs leading 12-3 after attempting five field goals in the first half. Camarda was the holder on those kicks.

There have been a few instances of kicks hitting the board at AT&T Stadium, which is now in its 14th season. Cowboys punter Bryan Anger had a high kick that hit the bottom of the massive screen in the NFC wild-card game against San Francisco last January.