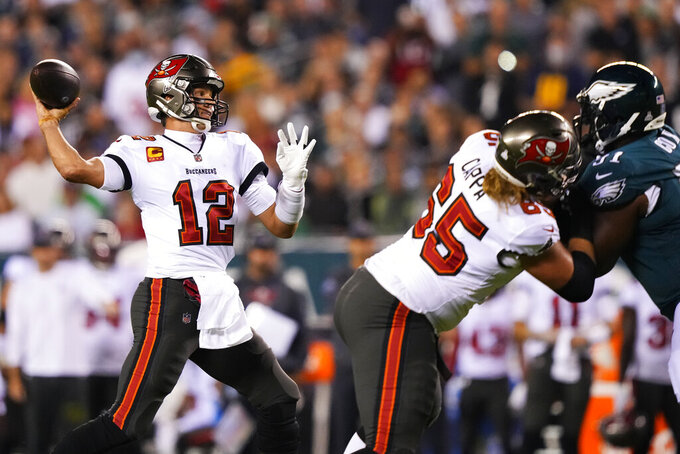 Tampa Bay Buccaneers quarterback Tom Brady (12) looks to pass during the first half of an NFL football game against the Philadelphia Eagles on Thursday, Oct. 14, 2021, in Philadelphia. (AP Photo/Matt Slocum)

TAMPA, Fla. (AP) — The Tampa Bay Buccaneers don’t trust the numbers when it comes to the struggling Chicago offense.

Coach Bruce Arians likes what he’s seen of rookie Justin Fields, noting the young quarterback not only has a strong arm but also the ability to give opposing defenses fits when he decides to tuck the ball and run.

Chicago might rank last in the NFL in total offense and be the only team in the league that averages more yards per game rushing than passing, but Arians says there are talented players around Fields who give the Bears (3-3) the potential to be more productive.

“I don’t put any stock in stats,” Arians said, looking ahead to Sunday when the defending Super Bowl champions (5-1) aim for a fourth consecutive victory and the best seven-game start in franchise history.

“You never know with a young quarterback what’s going to happen. ... He’s big, he’s athletic, he’s got a tremendous arm,” the Tampa Bay coach added. “And he’s faster than Jalen Hurts. We had a little trouble containing him, so we’ve got to do a better job of keeping him in the pocket.”

The Bucs held off Hurts and the Eagles 28-22 last week in a game that wasn’t as close as the final score. They have added incentive to keep tabs on Fields and the Bears after playing poorly last season during a 20-19 loss at Chicago.

Arians said there’s plenty the Bucs can take from that game and apply to this meeting.

“Yeah, don’t get 13 penalties. And everything else that went on up there — finishing plays, turning the ball over. ... There are a lot of things to learn from that tape,” the coach said.

It won’t be easy for the Bears, who lead the NFL with 21 sacks, to replicate their success.

Tom Brady, who was still getting acclimated to new surroundings when the teams met a year ago, leads the NFL in passing yards (2,064) and is second in touchdown passes (17) through six games.

The Bears average 129 yards rushing compared to a league-low 117.2 passing. Throw in the fact the Bucs have the league’s stingiest run defense (54.8 yards per game) and Chicago faces a tall task Sunday.

“That will be a true test for us. You saw what they did last year when we faced them. They’re a stout run defense. They’ve got a lot of great players on that front line, the second level with their linebackers,” Bears coach Matt Nagy said.

“The amount of respect that I have for Todd Bowles as a defensive coordinator and what he does, is real,” Nagy added. “So, that combination of how he schemes and then the players they have, I think there is a reason why they are that good."

Tampa Bay leads the league in passing but is 28th in rushing. The defending champs don’t have a 100-yard rusher this season, however, Leonard Fournette has provided balance by assuming a greater workload and also getting involved in the passing attack the past three games. His 376 total yards from scrimmage over that stretch are the third most in the NFL behind Derrick Henry (463) and Jonathan Taylor (441).

The Bears rank last in the NFL in total offense even though they are seventh in rushing. Clearly, they have work to do in the passing game.

Fields continues to show promise as well as having room to grow. The No. 11 overall draft pick led 80-yard touchdown drives in the first and fourth quarters against Green Bay, but the offense also stalled for a large part of that game.

Fields has thrown for 632 yards, two touchdowns and three interceptions in six games, including four starts. The former Ohio State star has been sacked 18 times for a league-leading 163 yards.

The Bears are 2-2 with Fields as their starter.

The Bears could be without one of their top pass rushers when they face another all-time great quarterback.

Chicago placed Robert Quinn on the reserve/COVID-19 list on Tuesday, putting the resurgent linebacker’s status in question. The two-time Pro Bowl pick is second on the team to Khalil Mack with 5 1/2 sacks after finishing with two last season, his first with the Bears.

Mack (foot) and defensive tackle Akiem Hicks (groin) are banged up, too.

Even at full strength, the Bears would be in for another tough task. Brady may not own the Bears the way Aaron Rodgers has over the years. But the three-time MVP is 5-1 in six games against Chicago.

“One is just a little more mobile than the other one,” Bears linebacker Alec Ogletree said. “But they both do things where they make their offense go. When they are both hitting and clicking with their receivers and backs or whoever, they are tough to defend. Obviously, you can see that with the numbers they put up and stuff like that.”