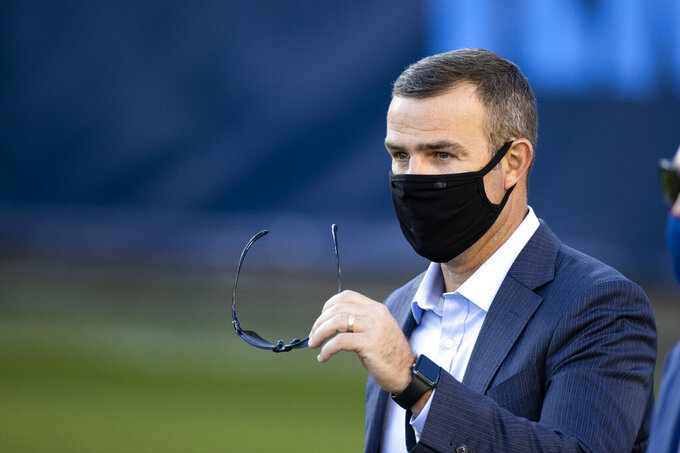 FILE - In this Oct. 13, 2020, file photo, Buffalo Bills general manager Brandon Beane walks on the field before an NFL football game against the Tennessee Titans in Nashville, Tenn. The Bills signed Beane to a multi-year contract extension on Thursday, Dec. 10, 2020, in locking up the architect of a team in position to secure its third playoff berth in four years. (AP Photo/Brett Carlsen, File)

ORCHARD PARK, N.Y. (AP) — The Buffalo Bills signed general manager Brandon Beane to a four-year contract extension on Thursday, locking up the architect of a team in position to secure its third playoff berth in four years.

The Bills announced the signing, and a person familiar with the deal provided The Associated Press the length of Beane's new contract. The person spoke on the condition of anonymity because the team did not release the terms of the extension.

Beane had one season left on his current deal, and is now under contract through 2025. His contract coincides with coach Sean McDermott, who signed to a four-year extension in August.

“Brandon is an outstanding leader, and he has brought a great level of stability through our organization,” Bills owners Terry and Kim Pegula said in a statement released by the team. “We appreciate his strong communication skills, and he works extremely well with us, with Sean and with all levels of the organization. We are happy to extend his contract and to have Brandon and Sean leading our football team for many years to come.”

Beane and McDermott landed in Buffalo separately in 2017 after previously working together with the Carolina Panthers. McDermott spent six seasons as the Panthers defensive coordinator.

Beane broke in with the Panthers' communication department in 1998 and gradually worked his way up the team's ranks to be their assistant GM while also serving a stint as interim GM.

He was hired by Buffalo in May 2017 after Doug Whaley was fired a day after the draft, and five months after McDermott was hired as coach.

Beane and McDermott have overseen a renaissance in Buffalo that continues this season, the Bills (9-3) are leading the AFC East and have a chance to win their first division title since 1995.

Buffalo made the playoffs in both of their first seasons to end a 17-year postseason drought that stood as the longest active streak in North America’s four major professional sports.

While McDermott placed his attention on building a winning culture, Beane focused on rebuilding what had been an over-priced and under-performing roster.

Only two players — defensive end Jerry Hughes and long-snapper Reid Ferguson — remain on the team since before Beane and McDermott took over.

After spending his first season clearing the team’s payroll to free up room under the salary cap, Beane then proceeded to rebuild the roster through the draft, free agency and trades.

His most notable draft came in 2018, when Buffalo twice moved up in the first round to select quarterback Josh Allen at No. 7 and middle linebacker Tremaine Edmunds at No. 16.

Citing a need for Buffalo to score more points, Beane delivered by giving up a first-round draft pick to acquire receiver Stefon Diggs in a trade with Minnesota in March.

The moves led to Buffalo having one of the NFL's top-scoring offenses and Allen developing into one of the NFL’s top young quarterbacks this season.