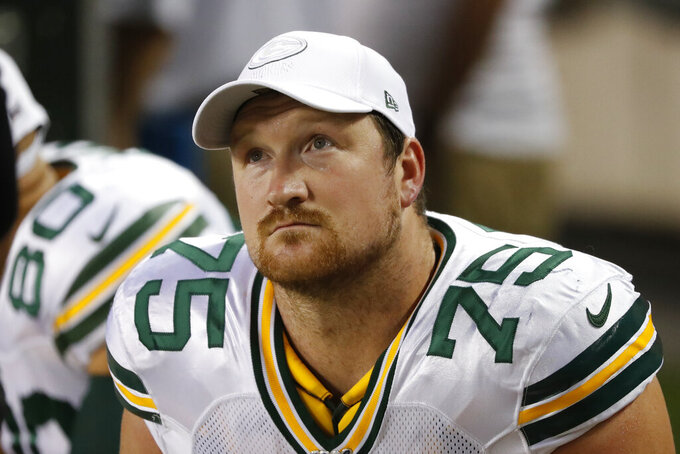 In this Sept. 5, 2019 file photo Green Bay Packers offensive tackle Bryan Bulaga sits on the bench during an NFL football game against the Chicago Bears in Chicago. By adding linebacker Christian Kirksey and offensive tackle Rick Wagner this week, the Packers signaled that they would be moving forward without two key veterans. That became apparent when longtime right tackle Bryan Bulaga agreed to terms with the Los Angeles Chargers. The Packers confirmed reports of his departure Wednesday, March 18, 2020 on the opening day of free agency. (AP Photo/Charles Rex Arbogast, file)

New Chargers tackle Bryan Bulaga voices his disappointment Tuesday over how many fellow players decided not to vote on the new labor agreement with the NFL.

“I’m very confused why so many guys didn’t vote. It was a big deal,” Bulaga said during a conference call to discuss his signing with Los Angeles. He did not say how he voted.

“The CBA isn’t something we’re voting on for ourselves. It’s a big decision and to see so many guys not vote is disheartening.”

Bulaga said he liked to stay current with the progress of talks because of his friendship with Cleveland Browns center and new NFL Players Association President JC Tretter. Bulaga and Tretter were teammates in Green Bay from 2013-18.

While the new CBA increases the percentage of revenues given to players and upgrades pensions, it does include an additional regular-season game, though not before the 2021 season. Many prominent players loudly opposed the deal, including Packers quarterback Aaron Rodgers.

The new CBA is set to begin with the upcoming season and goes through 2030. Free agent safety Eric Reid is challenging the CBA's validity due to language added following its ratification on March 15.

“Regardless of how it went it probably would have been encouraging if more guys voted. It’s interesting and unfortunate,” said Bulaga, who will be going into his 11th NFL season. “Guys are able to do what they want.”