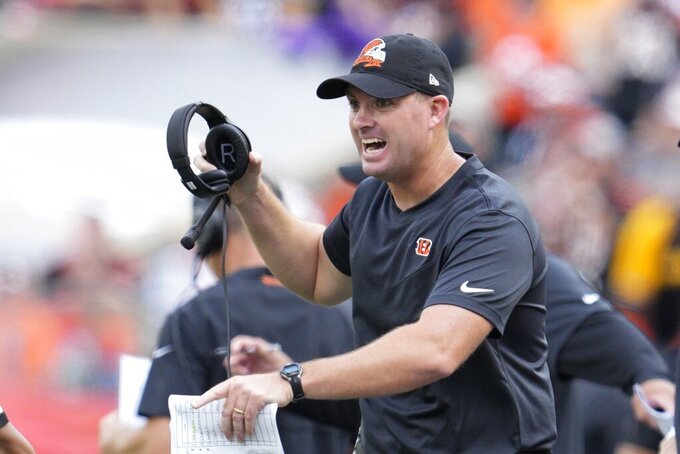 CINCINNATI (AP) — One of themes this week for Bengals quarterback Joe Burrow is a familiar one from last season: start faster.

Burrow's mistakes put Cincinnati in a hole Sunday. The third-year quarterback found his footing in the second half, but the Bengals lost a game they should have won, 23-20 in overtime to the Pittsburgh Steelers.

“Not my best,” said Burrow, who threw four interceptions and lost a fumble on a strip sack. “I'd like to take care of the ball better. But as bad as I played in the first half, I thought I battled in the second half and put us in a position to win the game. So I was proud of that, but obviously I've got to start stronger.”

Burrow got a delayed start on the season because of an appendectomy as training camp opened, but if there were lingering effects from the surgery or some rust to shake off last week, he's not talking about it.

After playing the worst half of his young career, Burrow directed two touchdown drives in the second half, the second one tying the game at 20. But the usually reliable Evan McPherson had the point-after attempt blocked and then missed a 29-yard field goal in overtime that also would have been a game-winner.

“I didn't let any of the turnovers faze me,” Burrow said. “I think I showed that with the comeback in the second half. Obviously, I've got to play better for us to win, but it is what it is at this point.”

The Bengals go on the road this week to face the Dallas Cowboys, who lost starting quarterback Dak Prescott to an injury Sunday. Backup Cooper Rush will start against the Bengals.

In the opener, Burrow played for the first time with the four new starters on the offensive line, which allowed seven sacks and another four hits on a quarterback who took more sacks than any other in the league last season.

“Communication on all fronts wasn't up to our standard on Sunday, from me to the O-line to the receivers to the coaching staff,” he said. “That might be first game, we're going faster than usual. You know, we're going to get better and better at that.”

Burrow insisted there is no extra motivation because of the frustrating loss.

“Every week, you feel the same, whether you win or lose,” he said. “You put it behind you and try to go out there and play your best ball on Sunday.”

Coach Zac Taylor took many positives from the game, including Burrow's ability to come back and nearly win the game, and an excellent defensive performance that put the clamps on quarterback Mitch Trubisky and the Steelers offense.

“I thought our guys really got into a good rhythm,” Taylor said. “I thought our defense played well from start to finish. We had a pick-6 on offense, so they gave up 13 points in regulation. I thought our offense got into a flow. Obviously, we had some setbacks and turnovers.”

WR Tee Higgins suffered a concussion in the opener and is questionable for the Dallas game. Higgins was dressed for the morning walkthrough on Wednesday.

“He’s making good progress through the protocol,” Taylor said. “I can’t 100% predict that today. He cleared the hurdles so far he needs to clear. He’ll do some limited stuff (at practice), he won’t do the team action.”

Veteran long-snapper Clark Harris will be out for months with a biceps injury suffered against the Steelers. That pushed emergency backup Mitchell Wilcox into action with mixed results. The Bengals elevated Cal Adomitis, an undrafted rookie from Pitt, from the practice squad to replace Harris.

“I think it's a stepping stone to build on, a brick that we laid down,” defensive tackle D.J. Reader said of the defense's performance against the Steelers. “I thought we had a good camp and coming into the season, so that kind of confirmed some of the things we had questions on. But we've got to go out there and get more turnovers and play a little bit harder.”