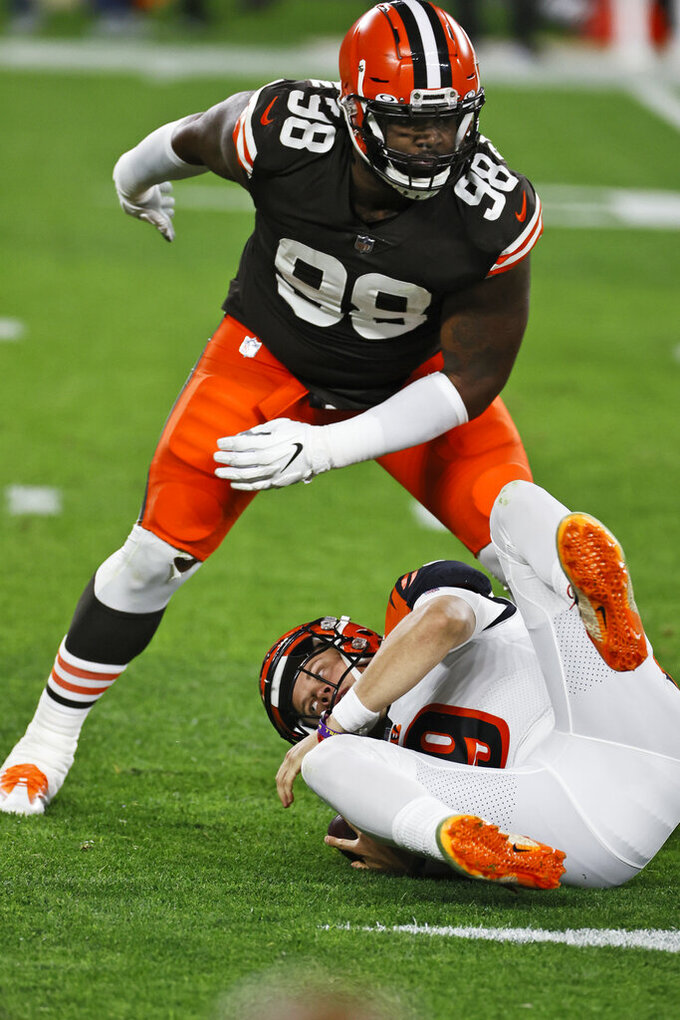 CLEVELAND (AP) — Joe Burrow's uniform was streaked with grass stains. His right arm was intact but understandably a little sore.

His second NFL start was quite a workout.

Burrow threw three touchdown passes and Cincinnati's rookie quarterback showed incredible composure and poise in keeping the Bengals around until the end of a 35-30 loss to the Cleveland Browns on Thursday night.

The No. 1 overall pick in this year's draft completed 37 of 61 passes for 316 yards, and made a few dazzling plays that lit up social media.

But Burrow, who led LSU to a national championship last year after transferring from Ohio State, wasn't interested in any outside praise.

“Losing isn’t very fun,” he said. "This might be the only time I’ve lost two games in a row. It doesn’t feel very good. ... Losing is unacceptable to me.”

Burrow went toe to toe with Browns quarterback Baker Mayfield, a fellow Heisman Trophy winner and top overall pick, who was impressed by what he saw from Cincinnati's rookie.

“The hype is real with Joe,” said Mayfield, who threw two TD passes and helped the Browns bounce back from a dreadful opener. “Obviously, that team loves him. They follow him and he leads them.”

Burrow's 61 attempts were the second-most in history for a rookie, bettered only by the 63 passes Carolina's Chris Weinke threw in 2001.

It wasn't necessarily the game plan Bengals coach Zac Taylor had in mind, but Burrow kept making plays and Cincinnati rode the 23-year-old, who threw a 9-yard TD pass to Tyler Boyd with 43 seconds left to pull the Bengals within 5.

“We felt like we had a lot of success in the passing game," Taylor said. "This is the same thing that kind of happens to us, we get down and we have to throw the ball and we’re having success doing it. We have a lot of faith in Joe.”

As Burrow making plays, NBA superstar and fellow Ohioan LeBron James praised the QB on Twitter by saying, “ ”Burrow is SPECIAL! He has the “IT” for sure."

Following the game, Burrow said he appreciated the words, but would have preferred a win.

(lebron and others complimented him during game) I mean it’s nice to have those guys have my back but we’re 0-2. That’s all that matters.

jersey was streaked with green grass stains. His arm