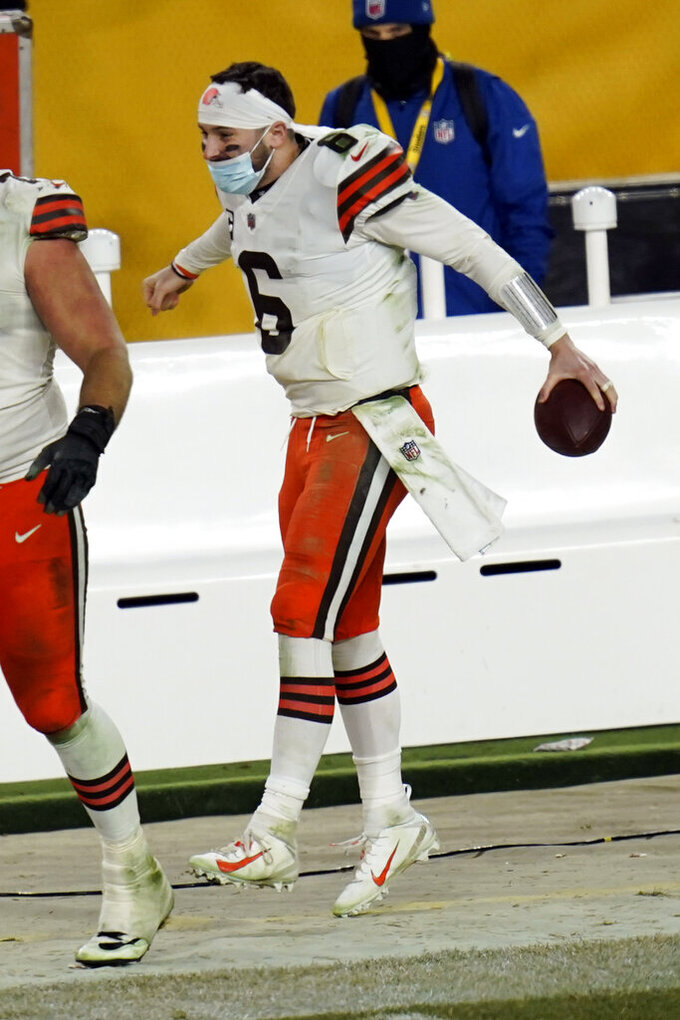 CLEVELAND (AP) — Baker Mayfield answered every question with thoughtful responses, carefully choosing each word while knowing a wrong one could spark controversy.

Days before the biggest game of his NFL career and another matchup against Patrick Mahomes and the reigning Super Bowl champion Kansas City Chiefs, Mayfield showed during a Zoom call some of the same growth and leadership he's displayed on the field this season while leading the surprising Browns (12-5) to the second round of the playoffs.

After practice, Mayfield, never one to miss a chance to trash talk, downplayed a seemingly dismissive tweet from Chiefs wide receiver Sammy Watkins.

As Cleveland opened a 28-point lead in its 48-37 wild-card win over the Pittsburgh Steelers on Sunday, Watkins engaged with one of his followers who said, "Looks like we got some comp (competition) next week.”

While the comment could be viewed as disrespectful, Mayfield wasn't bothered by it.

At least that's what he said.

“I have no problem with it to be honest with you,’’ Mayfield insisted. “Because if you don’t have confidence you’re not going to have success. And those guys have been doing it together for a few years now. They have a ton of confidence in each other, and so people get mad when you put it out there, you put it up for bulletin-board material, but I don’t have a problem with it.

There was a time not long ago when Mayfield probably would have reacted differently, firing back at Watkins with a snarky comment or promising some kind of retaliation.

Those days appear to be over for Mayfield, who almost from the time the Browns' 2019 season ended in huge disappointment has been determined to change the narrative about him. He's shaped up in more ways than one.

It doesn't mean he's not fiery or will hold back from an emotional outburst. He's still that guy. But it's just that Mayfield's not going to give others ammunition to take him down. He's removed the target.

Last week, after Pittsburgh wide receiver Juju Smith-Schuster's “The Browns is the Browns” comment went viral on social media, Mayfield and his teammates used it for motivation before pulling off the franchise's first playoff win in 26 years. Afterward, Mayfield approached Smith-Schuster on Pittsburgh's sideline to offer a handshake and a few words. Moments later, Mayfield gleefully ran down a corridor at Heinz Field and yelled “The Browns is the Browns” before joining his teammates in the locker room.

In many ways, the Browns are a reflection of their quarterback — underdogs.

Mayfield was twice a college walk-on who proved he belonged, won a Heisman Trophy and became a No. 1 overall pick, the prototypical overachiever. The Browns are doing much better than expected, too.

“We believe in ourselves, and that is why we are here,” Mayfield said. "We have a bunch of fighters who have scratched and clawed to get here. We we are going to continue to do that week in and week out.”

Mayfield's big personality preceded him to Cleveland, and it took a little time for some teammates to understand and trust him. Make no mistake, the Browns are following him now.

“He's a winner," said Pro Bowl running back Nick Chubb. "That is his mindset. He's a winner. He's intense. He loves the game. He's also just a cool guy. You can talk to him about anything, and he's very down to earth. He's just a lovable guy.

"Everybody wants to be around him. That is just who he is.”

On the field, Mayfield has changed as well. Plagued by bouts of inconsistency, he's making better decisions, getting rid of the ball quickly and playing as well as any QB in the league. Since throwing an early interception against Cincinnati on Oct. 25, he's had 19 TD passes and one interception.

“He's a heck of a player,” said Chiefs coach Andy Reid. "He did a great job in college. He's driven. He wants to be great. That is how he goes about his business. He sure does a nice job with it. I would just tell you he has made huge strides.

"I just like his attitude and the way he goes about it.”

NOTES: Browns coach Kevin Stefanski expects to rejoin the team Thursday after missing last week's game with COVID-19. Offensive line coach Bill Callahan came back Wednesday after being out with the virus. ... Top CB Denzel Ward also returned to practice — just in time. He's back from COVID-19 — along with CB Kevin Johnson — and will be matched up with Chiefs WR and blur Tyreek Hill. ... RT Jack Conklin (hamstring), LB B.J. Goodson (shoulder) and TE David Njoku (hamstring) didn't practice. ... Mayfield and Mahomes had a memorable matchup in college as the QBs combined for more than 1,200 yards passing and 1,700 total yards. “An unbelievable game and unbelievable atmosphere,” Mayfield said.