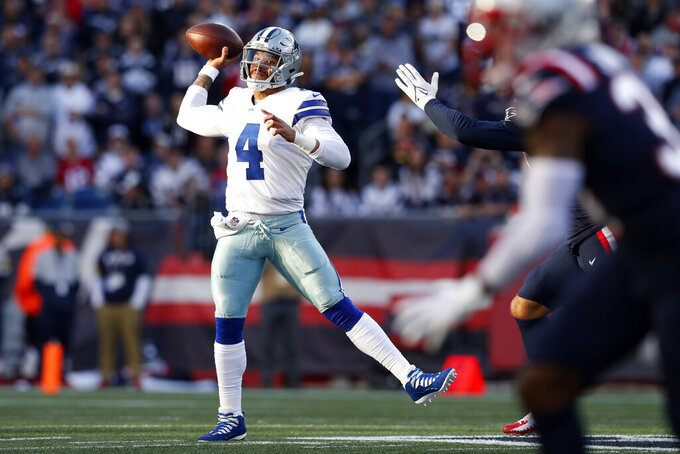 FRISCO, Texas (AP) — Dak Prescott missed some individual drills in practice Wednesday so the Dallas Cowboys quarterback could do rehab work on the side for his strained right calf.

Receiver CeeDee Lamb says he's “about 90 percent sure” Prescott will play Sunday night at Minnesota. The QB had the bye week to rest an injury sustained on his winning throw in overtime against New England.

Coach Mike McCarthy didn't go much further than saying the Cowboys (5-1) were giving backup Cooper Rush more prep time this week. Prescott was listed as limited in practice Wednesday, the day before he was scheduled to meet with reporters.

“I just think it’s a matter of trying to make sure Cooper is ready and to make sure Dak is getting what he needs until really Dak clears the threshold of the rehab component,” McCarthy said before practice. “We won’t make that determination on if he’s a full go until we get to that point. So we’ve got to make sure we’re getting Cooper ready too.”

Prescott vowed not to miss any time while wearing a walking boot in his postgame session with reporters after the 35-29 victory over the Patriots, which extended the Dallas winning streak to five games.

By Monday, the 2016 NFL Offensive Rookie of the Year was wandering around the team's facility without the boot, as seen when Prescott appeared briefly near the area where reporters were talking to other players. He said he was “fine” and still just wanted reporters to have fun speculating on his status against the Vikings (3-3).

“We all know the competitor Dak is,” running back Ezekiel Elliott said Wednesday. “I know between now and when the bye started, he’s been doing everything he can to make sure that he’s able to play in this game. He’s going to exhaust all resources.”

Prescott was out for the season with a compound fracture of his right ankle when Dallas visited Minnesota last year and won 31-28 behind backup Andy Dalton.

After Dalton signed with Chicago in hopes of starting there (he has since been replaced by rookie Justin Fields), Rush regained the spot he once had behind Prescott. Rush has played in relief of Prescott six times, but never started in the NFL.

“I’ve had a lot of time with Coop just from where my role was at my first two years, running the scout team and stuff,” tight end Dalton Schultz said. “Cooper is a guy who is able to laser it. He’s a good quarterback. That’s why he’s here.”

Right guard Zack Martin knows a little bit about what Prescott is going through. He missed the final five games last year with a calf injury that he initially sustained in practice. Martin tried to play through it, but in the second game with the injury, he aggravated it enough to end his season.

“Obviously our job descriptions are a little different, but feeling good running around, then all of a sudden, I’ve got a 300-pounder pushing me back and it was kind of like, ‘Oh, not ready to go yet,’” Martin said. “I know he’s doing everything he can to get ready.”

NOTES: McCarthy said RT Terence Steele would begin the week as the starter despite La'el Collins returning from a five-game suspension for violating the NFL's substance-abuse policy. Collins will get work at his old position and left guard, where it's possible he could eventually replace Connor Williams. Collins started every game but one at left tackle from 2017-19 before missing all of last season with a hip injury that required surgery. ... DE Dorance Armstrong is back at practice after missing the past four games with a sprained ankle.