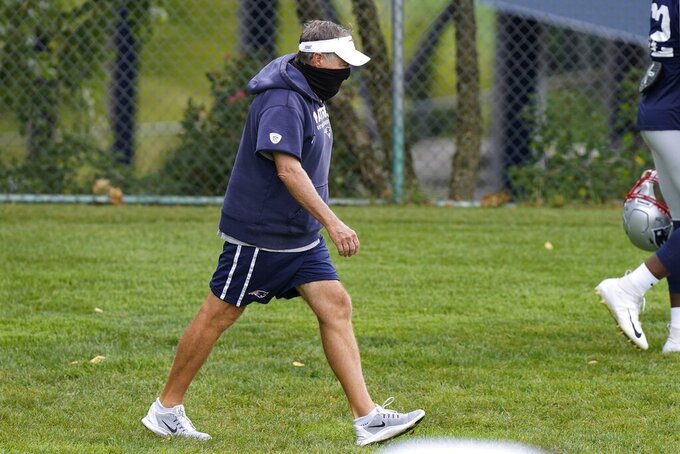 FOXBOROUGH, Mass. (AP) — In their two decades together, Bill Belichick and Tom Brady became the most decorated coach/quarterback tandem in NFL history.

The Brady era in New England ended in March when he signed with Tampa Bay. But Belichick isn’t allowing himself to trip over nostalgia heading into the 2020 season.

That means treating Brady’s exit the same as any other during his tenure.

“We’ve had a lot of great, great players over the course of that time. You could have the same conversation about all of them: Tedy Bruschi, Rodney Harrison, Ty Law, Logan Mankins, Rob (Gronkowski),” Belichick said. “You could go right down the line. Every team has changes every year. We have them, so does everybody else, and I think right now, everybody’s focused on this year. We’re looking ahead, we’re not looking backwards at anything.”

No one can fill Brady’s shoes alone, but the Patriots are turning to a former league MVP to try.

Cam Newton’s signing in July has not only helped lessen the sting of Brady’s departure, it has renewed Patriots fans' hopes of avoiding a complete drop-off. A three-time Pro Bowl selection and the league’s top player in 2015, Newton remains the NFL’s all-time leader in rushing touchdowns by a quarterback.

There are significant questions about his health. He played only two games in Carolina last season before being placed on injured reserve with a broken bone in his foot, which required surgery. He also had surgery to repair a torn rotator cuff in his throwing shoulder before the 2019 season.

Still, if he’s healthy, his skill set gives Patriots offensive coordinator Josh McDaniels options he didn’t have with Brady. It is why Newton says he isn’t stressing over the weight that comes with succeeding a future Hall of Famer.

“It’s a breath of fresh air, to be honest with you,” Newton said. “It’s a challenge that I have to accept each and every day, but no challenge is ever going to be greater than the personal challenge. ... Yeah, we all know what (Brady) was and what it is and it needs no mention, but yet at the same time, I think I’ve got my hands full with trying to learn as much as I can in a short period of time, and that’s what I’m trying to do.”

“My job is to come here, compete, put this team in the best situation to win. Do my part,” he said.

Newton spent most of the offseason in free agency purgatory following his release from the Panthers with one year remaining on a five-year, $103.8 million contract. It's why he happily jumped at the one-year, incentive-laden deal offered by the Patriots.

While he has no animosity about how things ended in Carolina, he said he did take note of the teams that passed on him.

“I used that as fuel. I used that as something that’s a constant reminder that I just need to use these 24 hours and get better,” Newton said.

The Patriots had a league-high eight players opt out of the season because of COVID-19 concerns. The defensive side of ball was affected the most with starting linebacker Dont’a Hightower and safety Patrick Chung both choosing not to play. They were joined by starting right tackle Marcus Cannon, running back Brandon Bolden, tight end Matt LaCosse, receiver Marqise Lee, fullback Danny Vitale, and offensive lineman Najee Toran.

New England allowed the fewest points in the NFL (14.1 per game) in 2019. The unit was hit hard in free agency, losing three of its top five tacklers, including linebackers Jamie Collins and Kyle Van Noy. It will put a lot on the shoulders of cornerback and reigning Defensive Player of the Year Stephon Gilmore, who had a team-high six interceptions. He leads a strong secondary that also returns starting safety Devin McCourty and CB Jason McCourty.

The offensive line is also mostly intact. Center David Andrews is back after spending 2019 on injured reserve. He is joined by fellow multiyear starters in left guard Joe Thuney and right guard Shaq Mason. Cannon opted out, but if left tackle Isaiah Wynn stays healthy following two injury-plagued seasons, the unit could be among best in the AFC. It will also go a long way in keeping Newton healthy.