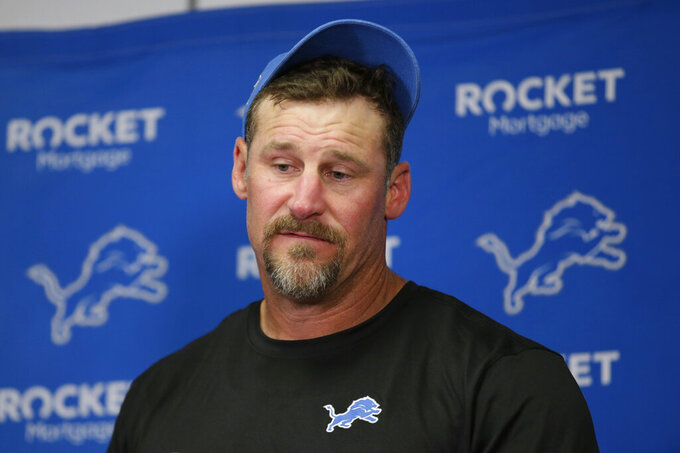 The coach decided to have his kicker try a 54-yard field goal with 1:14 left. It missed, giving Minnesota the ball at its 44 and needing only about 20 yards to have a shot at a tying field goal.

Instead, Kirk Cousins hit K.J. Osborn for a pair of 28-yard gains, the second giving Minnesota the winning touchdown.

“I can’t sleep on Sunday nights, whether we win or lose,” Campbell said. “I got about an hour last night, and I spent the rest of the night thinking about what I could have done better.

“Kicking was a major mistake, and I have to do better than that. I have to learn from it, just like our players.”

What frustrated Campbell was that he changed his base philosophy to kick the field goal.

With 2:36 to play, the Lions stopped the Vikings on downs, giving them the ball at the Vikings 47. Campbell played things conservatively, forcing Minnesota to use up its final timeouts.

A 10-yard run by Jamaal Williams gave the Lions fourth-and-4 at the Vikings 36. Campbell let the play clock run down, then called Detroit’s final timeout with 1:14 to play.

It seemed obvious what he would do. He had already gone for it on fourth down six times in the game and succeeded on four of the attempts.

A first down would end the game, and a miss would still force the Vikings to start from deep in their territory. Even punting would have worked — Jack Fox is one of the league’s best at pinning teams inside their 20.

But Campbell chose the 54-yard field goal, even though Austin Seibert had missed from 48 earlier in the game.

He missed again, and the Lions were 1-2.

“I’d give him another shot to kick from there — he missed the first one, but he came back and made one (from 40 yards) later,” Campbell said. “But, full disclosure, he’s sore today so we’ll see what happens with him.”

The Lions' running game wasn’t as explosive as it had been against the Philadelphia Eagles and Washington Commanders, but still put up 139 yards and two touchdowns. In three games, Detroit has rushed for 511 yards at 5.9 yards per carry and scored five times.

That’s with De’Andre Swift only carrying the ball 27 times because of ankle and shoulder injuries — Campbell said he might sit out a couple of games to heal up — and the Lions juggling their offensive line to find five healthy players.

Jared Goff is in his second year as Detroit’s quarterback, but he’s still struggling to give the Lions any kind of vertical passing threat. His yards per completion is up from 9.8 last year to 11.3 this season, but his receivers gained 136 of their 277 yards after the catch Sunday.

That means, on average, they were catching the ball just 5.6 yards downfield. Cousins wasn’t much better, averaging 5.9 yards, but he was able to get the ball deep to Osborn twice in the final minute.

With Swift banged up, Jamaal Williams has stepped up to carry a bigger share of the load. He’s not as explosive as Swift, but had 87 yards rushing and two touchdowns Sunday and caught two passes for 20 yards.

CB Amani Oruwariye had a strong 2021 season, serving as the No. 1 cornerback with Jeff Okudah out with injuries, but that hasn’t carried over to this season. Okudah is back and has successfully taken top receivers out of Detroit’s first three games, but teams have just switched to picking on Oruwariye.

Adam Thielen didn’t have a huge statistical game, catching six passes for 61 yards and a touchdown, but Oruwariye committed six penalties in coverage.

Swift missing two games would be a significant blow to the Lions, but losing S Tracy Walker for the season with an Achilles tendon injury will be a bigger problem.

“That hurts us for multiple reasons,” Campbell said. “Since I walked in the door last year, Tracy has been all in, and he’s been one of our team captains. Nobody puts in more work than he does, and he’s one of the smartest players we have on defense. We’re losing a big cog in our machine.”

303 — The average offensive yards put up by opposing quarterbacks through three games, including rushing, passing and sacks. Jalen Hurts, Carson Wentz and Cousins have also combined for six touchdowns while only turning the ball over once.

Forget about last season’s 51-29 loss in Seattle — a game the Lions trailed 38-7 at one point — and focus on the Seahawks as a very beatable team at home. Russell Wilson went 20 for 29 for 236 yards and four touchdowns, but Detroit will be facing Geno Smith this time.