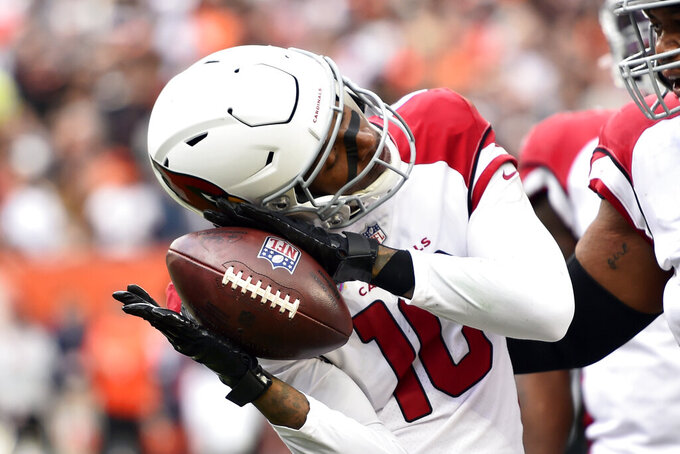 Arizona Cardinals wide receiver DeAndre Hopkins celebrates after scoring a 13-yard touchdown during the first half of an NFL football game against the Cleveland Browns, Sunday, Oct. 17, 2021, in Cleveland. (AP Photo/David Richard)

TEMPE, Ariz. (AP) — Arizona head coach Kliff Kingsbury likes to get to the office at the ungodly time of 4:45 a.m. for a work day. Vance Joseph isn't that aggressive and waits all the way until — gasp! — 5:30 a.m. before arriving at the practice facility.

Getting an early jump is paying off.

The Cardinals (6-0) remained the NFL's final undefeated team by beating the Cleveland Browns 37-14 on Sunday in arguably their most impressive win of the season. Arizona was without Kingsbury, quarterbacks coach Cam Turner, defensive linemen Zach Allen and Corey Peters and star linebacker Chandler Jones after all of them tested positive for COVID-19 last week.

It didn't matter. Joseph and other assistant coaches filled in with the play calling, the offense was quick and efficient, the defense was excellent, and the Cardinals never trailed.

“It was a fun game to watch the guys play,” Joseph said.

The win was more evidence that the Cardinals are building something special in the desert. It's become clear this team can take some adversity and handle it.

Kyler Murray had another good game, completing 20 of 30 passes for 239 yards and four touchdowns. The third-year pro joked that he might have had a little more leeway on the field without Kingsbury watching from the sideline.

“Once we got the news, it was just an opportunity and kind of exciting to go out and prove ourselves on the road against a great team,” Murray said. "I think with the guys, you could feel the energy all week at practice. It was a great week. Coming on the road, us versus them, it was a good game.”

Now the main concern for the Cardinals is getting everyone healthy and back on the roster. Joseph said Kingsbury was “bored” and ready to get back to the office, though he can still handle meetings via Zoom.

“I think everyone is nervous about the COVID issues," Joseph said. “It is a moving target. Obviously, if you have one positive, there can be two or three more. I’m surprised there weren’t more. Right now it’s a moving target. We’ll see what the league gives us this week as far as protocols.”

Spreading the wealth. Six games into the season, it's clear that Murray is comfortable throwing to any receiver at any time. A.J. Green led the team with 79 yards on five catches vs. the Browns. DeAndre Hopkins has two touchdown grabs. Christian Kirk caught a touchdown pass against the Browns, too.

The Cardinals will have another option soon after adding veteran tight end Zach Ertz late last week in a trade with the Philadelphia Eagles. Ertz has caught 38 career touchdown passes.

It worked on Sunday, but there are parts of the roster that appear to be held together by bubble gum and Scotch tape. The defensive line is particularly banged up with COVID-19 issues and injuries. Also, three-time Pro Bowl center Rodney Hudson (ribs) is on injured reserve.

Joseph. Arizona's defensive coordinator was the head coach of the Denver Broncos for two seasons in 2017 and 2018 and filled in on Sunday in an impressive win.

Joseph's stint in Denver didn't go particularly well — he had an 11-21 mark before getting fired — but he might be working his way back to another shot at a top spot. He's been the architect of Arizona's defensive rebuild over the past two-plus seasons and it's obvious the Cardinals responded to his presence on Sunday.

Joseph grinned when asked if Sunday made him miss the head coaching role.

“It was a part-time role for one night,” Joseph said. “I don't know — I didn't think about it that way. It was more of a fill-in role for one football game and my total focus was playing good defense and helping coach (Jeff) Rodgers, coach (Spencer) Whipple, coach (Sean) Kugler with the entire team. That's pretty much it.”

Murray's legs. This isn't necessarily a problem for the Cardinals, but for fantasy football owners. Those who thought they were getting a true dual-threat quarterback like Lamar Jackson have been disappointed.

Murray ran for 819 yards last season but has just 116 yards through six games in 2021. The 24-year-old quarterback is still using his quickness to make plays, but lately it's been more about buying more time in the pocket for throws instead of running for first downs.

The Cardinals await word on DL Rashard Lawrence (calf) and TE Darrell Daniels (hamstring), but mostly they're trying to work out virus issues and making sure guys can play.

77 — The Cardinals have won their four road games this season by a combined 77 points, nearly 20 points per game. Only the Jacksonville Jaguars have managed to keep the deficit under two touchdowns.

The Cardinals would like to get COVID-19 free for a busy 10 days. Arizona hosts the Texans on Sunday and then hosts the Packers four nights later on Oct. 28.