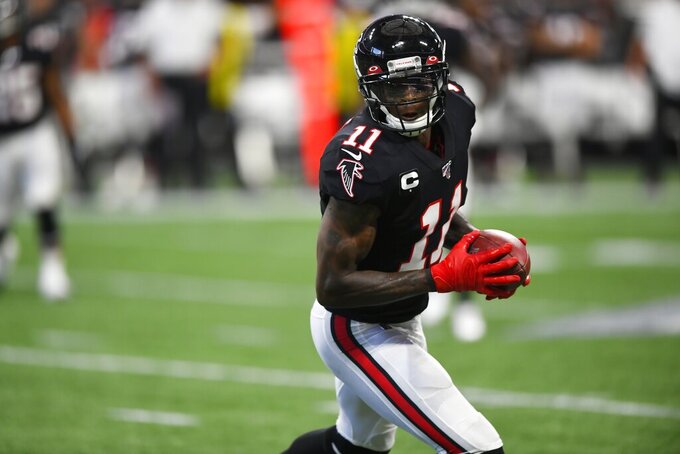 GLENDALE, Ariz. (AP) — The Arizona Cardinals and Atlanta Falcons are two football teams with a lot of similarities: productive offense, problems with the defense, and not a lot of wins.

At least the Cardinals have some momentum.

Arizona (1-3-1) is coming off its first win of the season, a 26-23 triumph over the Cincinnati Bengals. The Cardinals had a 23-9 lead midway through the fourth quarter before giving up two quick touchdowns, but salvaged the game thanks to a 31-yard field goal from Zane Gonzalez as time expired.

Now that the initial victory has been achieved for first-year coach Kliff Kingsbury and rookie quarterback Kyler Murray, they'd like to earn their first winning streak.

"We cleaned things up," Murray said. "We played better, but at the same time you, can't really dwell on it because we've got another game this weekend."

Atlanta (1-4) has spent a week in the desert after getting beaten by the Houston Texans 53-32. The Falcons didn't go home after the loss, flying directly from Houston to Phoenix and practicing on Arizona State's campus.

The Falcons are getting a lot of production through the passing game — quarterback Matt Ryan and receiver Julio Jones are on track for big seasons — but the running game has struggled and the defense has had issues, particularly last week.

Atlanta is hoping for a win against the Cardinals before a tough three-game stretch against the Rams, Seahawks and Saints.

There have been two versions of the Arizona offense this season: The one that looks great in the middle of the field and the one that bogs down in the red zone.

Arizona ranks eighth in the NFL with 22 scoring drives this season. The problem is that 14 of those drives ended with field goals instead of a touchdown.

"I'm open to suggestions if you have any," Kingsbury said with a grin. "I saw improvements. I know it didn't look like it, but I saw improvements in what we're trying to do. We just have to keep getting better, coaches and players, in that area.

Atlanta's Jones is on track for another big season. He's caught 26 passes for 359 yards and four touchdowns.

The two-time All-Pro will go against an Arizona secondary that includes several rookies such as cornerback Byron Murphy Jr., and safeties Deionte Thompson and Jalen Thompson. Star cornerback Patrick Peterson can't return until next week because of his six-game suspension for violating the NFL's policy on performance enhancers.

"Any time you're trying to stop him, no matter who you have, it's going to be a tall task," Kingsbury said. "He's phenomenal. Watching the tape from this season, I've always watched him from afar, but watching it on tape and really studying him, he's an absolute freak. He plays hard every snap. You can tell he's passionate about the game and does everything right."

Arizona's had its issues on defense this season, but is still getting production from veteran pass rushers Chandler Jones and Terrell Suggs.

"Their edge players are guys who have been productive in this league for a long time and are disruptive in what they do," Ryan said.

Murray, the No. 1 overall pick in April's draft, has had a promising start to his career. He's thrown for 1,324 yards, four touchdowns and four interceptions while also running for 206 yards and two touchdowns. He's the first player in NFL history with more than 1,300 yards passing and 200 yards rushing through his first five career games.

Murray and Kingsbury both said they continue to grow in understanding what works for the offense.

"The more that the season goes on, and the more we spend time with each other, that trust and that bond will continue to grow," Murray said.

Atlanta's defense needs to play much than it did last week, when it gave up 53 points and 592 yards to the Texans.

Falcons coach Dan Quinn said making Murray uncomfortable in the pocket is a must for that to happen.