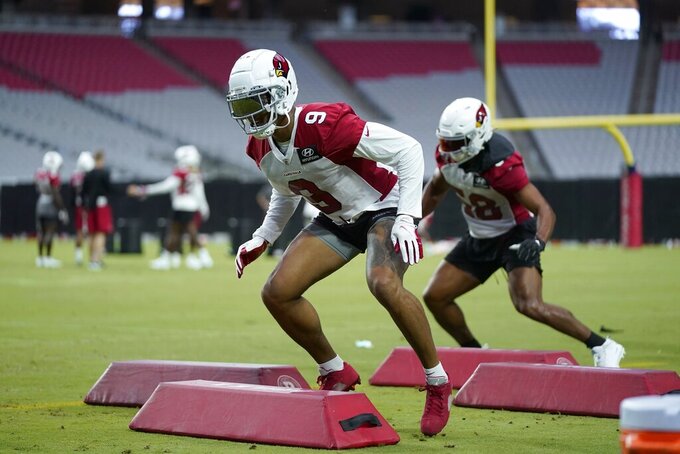 GLENDALE, Ariz. (AP) — Isaiah Simmons was a can't-miss prospect when the Arizona Cardinals selected him with the No. 8 overall pick in last year's draft. Pundits said he was a perfect prototype for the do-everything defensive player that NFL teams craved.

Then something unexpected happened during Simmons' rookie season.

But coach Kliff Kingsbury isn't down on the second-year linebacker, who was one of the college game's biggest stars at Clemson. He said Simmons navigated the pandemic-altered season as well as could be expected, especially since the Cardinals had him trying to learn multiple positions while often staring at a Zoom screen.

“It wasn't fair, honestly,” Kingsbury said. “You saw his progression throughout the season. He had a good offseason, he's had a good training camp. He's learning every day.”

Kingsbury is so confident in the linebacker's ability that he and Cardinals GM Steve Keim made the surprising decision to anoint Simmons and rookie Zaven Collins as the starting linebackers in the middle of the defense, even before camp competition started.

Simmons said he wasn't surprised the Cardinals gave him so much responsibility so soon.

“I figured that I was going to have to step into the role of commanding things, and things eventually being mine,” Simmons said. “From the day I got drafted, they already told me that: Eventually this defense was going to mine.”

The 6-foot-4, 238-pound Simmons had a slow start to his career while trying to learn in strange circumstances.

Strangely enough, both the low and high points of his season might have come in Week 7. He played a season-low 6% of the team's defensive snaps against the Seattle Seahawks, but was unexpectedly called into action during overtime.

Then he came up with an interception that helped secure a 37-34 win.

Simmons said he'd love to say the play happened because he suddenly was an expert at studying opponents' tendencies. Instead, he credited the Cardinals' coaches for making an adjustment the previous week.

“Really, it was that we put in a package that was new," Simmons said. "It's really tough on the quarterback. You never know who's coming, who's dropping. I guess (Russell Wilson) just read it wrong. Or I made the better play.”

No matter who gets the credit, there's little doubt the play jump-started his season. He had a much bigger role in the season's second half and Kingsbury was comfortable enough with Simmons' performance to give him leadership responsibilities in his second year.

Simmons said he wouldn't have a problem being the team's defensive quarterback, shouting out coverages and assignments to players up to 10 years his senior.

“We understand that the position I'm in, it comes along with the job,” Simmons said. “Everybody understands that it's not me telling a future Hall of Famer J.J. Watt what to do. That's just how football goes along.”

Simmons has also been asked to mentor Collins, who was the No. 16 overall pick out of Tulsa. The 6-foot-4, 260-pound Collins is more a prototypical linebacker and will be asked to anchor the middle of the field.

Simmons said he hopes the duo can become like Tampa Bay's linebacker combination of Lavonte David and Devin White. The two combined for over 250 tackles last season, helping the Buccaneers win the Super Bowl.

“I told Zaven when he came in, ‘We can be that and more if we want to. It just depends on how much work we want to put in, how much we’re going to buy in to be where we want to be,'” Simmons said.