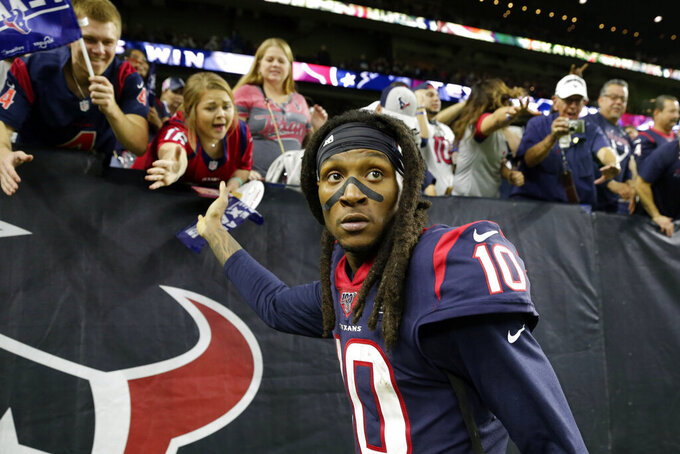 The Cardinals came into the offseason needing to give a boost to their struggling defense and it appears they've done that after agreeing to three-year contracts with defensive lineman Jordan Phillips and linebacker Devon Kennard.

But as has usually been the case over the past year in Arizona, the biggest buzz is surrounding the offense.

Arizona's biggest move so far was on Monday, when the team added elite receiver DeAndre Hopkins after a trade with Houston that sent running back David Johnson back to the Texans. Houston also receives a second-round pick this season and a fourth-round pick in 2021. Arizona gets a fourth-round pick.

All three of the team's moves this week haven't officially been announced, but were confirmed by people with knowledge of the situations. They spoke to the AP on condition of anonymity because even though the NFL’s business year began on Wednesday, teams haven't been able to complete deals because contracts have to be signed and physicals completed. That's not an easy process these days because of the coronavirus outbreak that's grounded league travel.

The 6-foot-1, 212-pound Hopkins has been one of the most consistent receivers in the NFL over the past seven years, topping 1,000 yards receiving in five of those seasons. He caught 104 passes for 1,165 yards and seven touchdowns last year, helping the Texans reach the playoffs before they lost to the Kansas City Chiefs in the divisional round.

Arizona finished with a 5-10-1 record last year under first-year coach Kliff Kingsbury and rookie quarterback Kyler Murray. Now they'll have a legit No. 1 receiver to pair with veteran star Larry Fitzgerald and the up-and-coming Christian Kirk.

Hopkins tried to downplay any rift he had with Texans coach and general manager Bill O'Brien.

“This is being blown way out of proportion,” Hopkins posted on social media. “As I’ve said before, I enjoyed and am proud of my time with the Texans. I have the utmost respect for Coach O’Brien and that will not change. Now, I’m ready to play for the Cardinals.”

Phillips and Kennard join a Cardinals defense that has a good core, including edge rusher Chandler Jones — who had 19 sacks last season — linebacker Jordan Hicks, cornerback Patrick Peterson and safety Budda Baker. The 6-foot-6, 341-pound Phillips had a breakout season with the Buffalo Bills in 2019, finishing with a career-high 9 1/2 sacks.

The 6-foot-3, 256-pound Kennard has had seven sacks in back-to-back seasons with the Detroit Lions. The 28-year-old played his first four years in the league with the New York Giants.

The Cardinals would still like to add a little more depth to a defense that gave up the most total yards in the NFL last season. But it's undeniably been a good start to the offseason for general manager Steve Keim, who put his trust in Kingsbury and Murray last season and appears to have the franchise headed in the right direction.