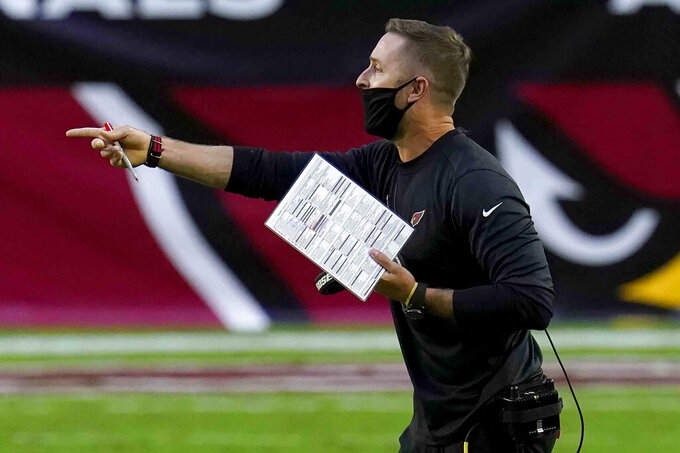 GLENDALE, Ariz. (AP) — The Arizona Cardinals sometimes appear oh-so-close to joining the NFL's elite teams. Then there are days like Sunday, when a handful of missed opportunities and mistakes kept them out of a tie for first place in the NFC West.

It's not that the Cardinals played poorly in the 34-31 loss to the Miami Dolphins. In fact, there were plenty of good plays by a lot of different players. But linebacker Jordan Hicks said all those players also had some costly mistakes that kept the Cardinals from tying the Seahawks for first place in the division.

“At some point, everyone was saying ‘My bad,'” Hicks said when talking about the defense. “When you have too many ‘My bads’ from that many different people, it’s going to look the way it did tonight.”

The loss put an end to the Cardinals' three-game winning streak. Arizona had a 31-24 lead in the second half, but the Dolphins scored 10 unanswered points in the fourth period as the Cardinals' offense — which came into the game averaging the most total yards in the NFL — suddenly went cold.

Quarterback Kyler Murray had another huge statistical performance, finishing with 283 yards passing and three touchdowns. He also had 106 yards rushing and a touchdown. But the Cardinals had two drives in the fourth quarter that produced no points.

Murray also had a costly fumble in the first quarter that was scooped up by Miami's Shaq Lawson and returned 36 yards for a touchdown.

“We've just got to be better,” Murray said.

Zane Gonzalez missed a 49-yard field goal that came up short with 1:53 left that would have tied the game. The Cardinals lost despite outgaining the Dolphins 442-312.

“I had some bad play calls that kept us out of the end zone,” Kingsbury said. “I think that was it, me screwing (Murray) up on those. When he was asked to perform his job he did it at a high level.”

The Cardinals (5-3) are in playoff contention, but Sunday’s loss blunts their momentum. They have another tough home game next weekend, hosting the Buffalo Bills (7-2), who just beat the Seahawks.

Arizona’s also dealing with a bunch of injuries, particularly on defense. The Cardinals lost 2019 All-Pro linebacker Chandler Jones to a season-ending biceps injury in October and starting cornerback Dre Kirkpatrick was out with a thigh injury on Sunday. Linebacker Devon Kennard and cornerback Byron Murphy Jr. missed the game because they’re on the reserve/COVID-19 list.

Another cornerback, Kevin Peterson, left the Dolphins game with a concussion and it appears all those missing pieces are starting to take a toll. The Cardinals have given up 65 points over the past two games.

Arizona linebacker Jordan Hicks was complimentary of Miami’s rookie quarterback Tua Tagovailoa, who threw for 248 yards and two touchdowns in just his second NFL start. But Hicks said there was no excuse for the inconsistency, even with several new faces in the lineup.

“At the end of the day, it doesn’t matter who is out there,” Hicks said. “We practice all these calls throughout the week. We know what we have. It’s honestly focus. And here’s the thing: It’s everybody."

There were still some positives for the Cardinals. Tight end Maxx Williams caught a touchdown pass in his first game back since missing most of the season with an ankle injury. Safety Jalen Thompson also returned after missing several games. Christian Kirk had another big game, catching five passes for 123 yards and a touchdown.

Now it's on to the second half of the season. The Seahawks (6-2), Rams (5-3) and Cardinals are in a tight battle for the top of the division.

“We've got to bounce back,” Hicks said. “We can't let one loss turn into two.”