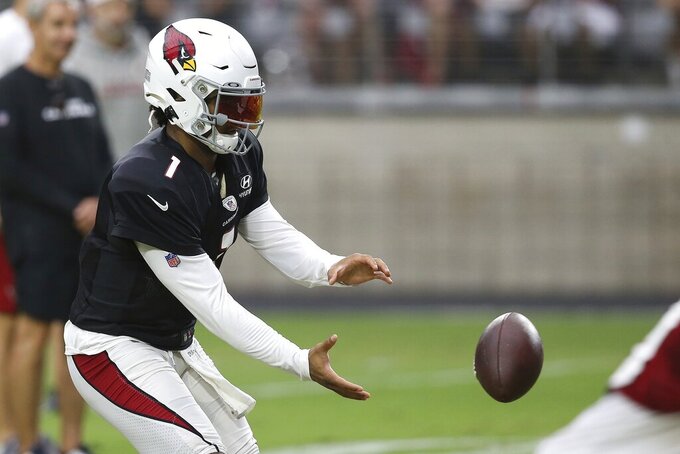 GLENDALE, Ariz. (AP) — Kyler Murray doesn't expect to play much next Thursday when the Arizona Cardinals open the preseason at home against the Los Angeles Chargers. And much like first-year coach Kliff Kingsbury, the No. 1 overall pick isn't giving away hints on how the offense will look.

"Whatever we do I know it will be pretty generic, pretty basic, so just get out there and get a feel for the game and let it rip a little bit," Murray said.

A vanilla offense might not be what fans want to see from Kingsbury, known for his "Air Raid" attack at Texas Tech, and Murray, as much of a threat with his legs as his arm. But the process of becoming an NFL quarterback continues for Murray.

The Heisman Trophy winner at Oklahoma sees and hears the hype about his star potential, but scoffs at the idea of already being tabbed as favorite for Rookie of the Year.

"I really don't feel it, honestly. I see it when we're at dinner and the TV's on or whatever. But other than that I don't really pay much attention to it," Murray said. "I'm the favorite, to me that's just something that they have to do. I've got to go out and play well. If I don't play well then people are going to be mad, I'm going to be mad, everybody's going to be mad."

Kingsbury said that kind of talk comes with being the No. 1 pick.

"You can't control that narrative, and I understand that. He's the first pick and he is a dynamic talent," Kingsbury said. "As a coach you understand that there's going to be ups and downs and he's a young player, and we're going to deal with some adversity. In today's society, that's what you're going to get."

The coaching staff is trying to keep Murray's arm as fresh as possible while preparing him to make the throws required in the offense. Murray is adjusting to such things as having play calls come through his helmet.

For the moment, Murray hasn't run much. He's focused more on where his teammates are on the field.

"I want him to play the game when he's out there, treat every rep like a game," Kingsbury said. "But I think he is working through his process. We know he can run, he knows he can run and so he wants to get through some reads and do some different things."

NOTES: Rookie WR Andy Isabella, the second of two second-round draft picks, left practice with a member of the training staff just before it ended with an apparent leg injury. He limped to the sideline after making a touchdown catch. ... LB Brooks Reed has a minor injury — Kingsbury didn't disclose its nature — and will miss a few days of practice. ... In keeping with his plan to rest veterans on pre-determined practice days, Kingsbury gave LB Terrell Suggs Thursday off. ... The Cardinals will practice outside in the desert heat on Friday morning, for the first time in camp. "Tried to fit it in where we felt it fit best," Kingsbury said. "It's still good to get out in it and stress the guys a little bit."... Saturday's training camp session is billed as the annual "Red and White Practice," and will include a scrimmage. The Cardinals intend to use the day as a dress rehearsal of sorts for game days. "As a staff we have a pretty good feel for what we want to get done and what we want to get accomplished," Kingsbury said. "Just really kind of hone in going into game week how we want it to look."