Cardinals, Raiders try to bounce back from Week 1 duds 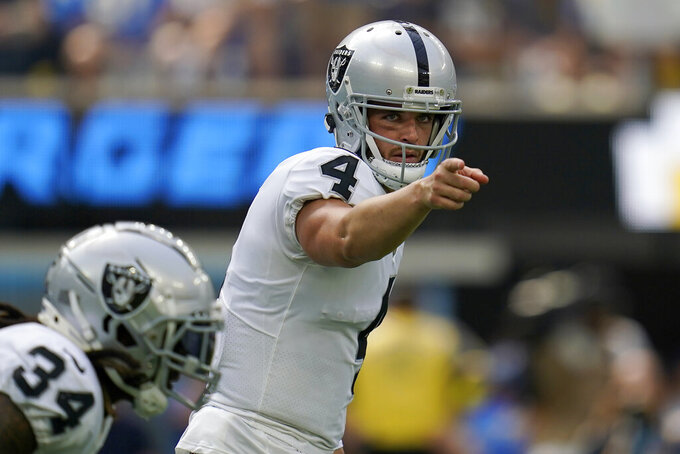 For the Arizona Cardinals and Las Vegas Raiders, the 2022 season started with a dud.

The teams looking to build on playoff performances from last season struggled in their openers, with the Cardinals getting blown out at home by Kansas City and the Raiders falling on the road at the division rival Chargers.

That's put some added urgency on the game Sunday, when Arizona (0-1) visits Las Vegas (0-1), given that no team that started the season 0-2 made the playoffs the past three seasons.

“When you get beat like that at home in Game 1, it’s got to be a wake-up call for whoever felt complacent or whatever internally,” Cardinals quarterback Kyler Murray said. "You’ve got to look in the mirror individually and ask yourself, ‘Do you really want to be here? Do you really want to be great? What drives you?’ Those are the questions I feel need to be asked.”

The 44-21 loss to the Chiefs was a carryover to how the 2021 season ended for Arizona. The Cardinals lost four of their final five games in the regular season to squander the division title and then got blown out in the wild-card round against the Rams.

That's only added to the frustration for Murray, who is trying to live up to the $230.5 million contract he signed in the offseason.

“You can only lose so much until it starts to boil over and stuff like that,” he said. “I’ve been here in this organization and since I’ve been here, we’ve gotten better each year, but it’s still not the standard, not how I’m used to playing and how I’m used to doing things on a football field."

The Raiders didn't look as bad as the Cardinals in Week 1, but there were still plenty of issues, including Derek Carr's three interceptions in a 24-19 loss to the Chargers.

Las Vegas had been hoping the offseason addition of All-Pro receiver Davante Adams would lift the offense to a new level, but that didn't happen in the opener.

“I mean you want to establish an identity as fast as possible obviously, and that doesn’t happen Week 1 whether it’s good or bad regardless," Adams said. “It’s going to take some time to get going and really figure out who you are as a squad."

The other big offseason addition the Raiders made besides adding Adams came when they signed edge rusher Chandler Jones as a free agent. Jones set the Cardinals franchise record with 71 1/2 sacks in six seasons in Arizona.

Now his old teammates get to face him in a game.

“It’s going to be fun," Murray said. “Chan is a great dude. One of the best teammates I’ve ever had the pleasure to play with. It’ll be weird and different seeing him in a new uniform, but at the end of the day he’s got one job and I’ve got one job.”

The Cardinals have a couple of former Raiders on their roster, center Rodney Hudson and cornerback Trayvon Mullen. Hudson made three Pro Bowls in six seasons with the Raiders before getting traded to Arizona last season.

Mullen, a 2019 second-round pick, was traded to the Cardinals last month. He is questionable this week with a toe injury.

One of the main questions surrounding the Cardinals during the offseason was how they’d replace Jones. The answer in Week 1 was simple: They didn’t.

The Cardinals never sacked Kansas City’s Patrick Mahomes, which is one reason he was able to throw five touchdown passes. Arizona hopes guys like Markus Golden, Dennis Gardeck and Zach Allen can put some pressure on Carr.

The Raiders' passing game in the opener revolved around Adams, who was targeted a league-high 17 times in the loss to the Chargers. Adams delivered with 10 catches for 141 yards and a TD, but Las Vegas' other two star pass catchers were mere afterthoughts.

“I just want the ball to go where it’s supposed to,” coach Josh McDaniels said. “I’ve always said this, the defense gets a vote. I wish I could tell you exactly where it’s gonna go on every play, but they get a vote.”

The Cardinals are still getting used to a new receiver hierarchy while three-time All-Pro DeAndre Hopkins is suspended for six games for violating the NFL’s performance-enhancing drug policy.

The Cardinals have some experienced and talented receivers like A.J. Green, Marquise Brown and tight end Zach Ertz, but it was little-known Greg Dortch who led the Cardinals with seven receptions against the Chiefs.

When Adams pushed for the offseason trade to Las Vegas, one of the main reasons was to be closer to his California home. This will allow his grandparents to see him play as a pro in person for the first time.

Adams said he sprang for a suite at Allegiant Stadium to accommodate his family.

“I spent about half a million dollars on a Raiders suite. That’s probably the one bad thing about coming here is that the suites are significantly more expensive,” he said. "But it’s good for the family — I probably won’t ever see it, but it’s fine.”