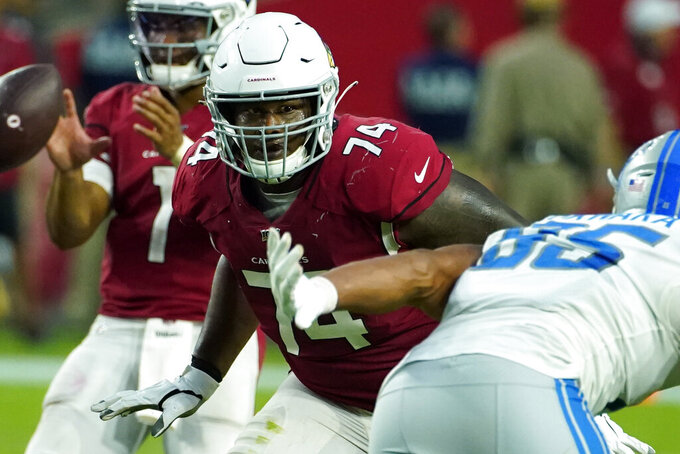 Now the Cardinals have made sure to keep the talented big man at left tackle who protects him.

The Cardinals announced on Tuesday that they've re-signed D.J. Humphries to a three-year contract that keeps him with the team through 2022. The 26-year-old started all 16 games at left tackle last season, anchoring an offensive line that exceeded expectations under first-year coach Kliff Kingsbury.

Humphries said on Tuesday he's “a loyal dude” and always believed a deal would get done.

The team did not disclose contract terms. NFL Network reported that the deal is worth $45 million, including $29 million guaranteed.

The 6-foot-5, 307-pound Humphries has started 43 games for the Cardinals since being selected in the first round of the 2015 draft out of Florida. He missed big chunks of the 2017 and 2018 seasons because of injuries, but bounced back with his best season and played all 16 games for the first time.

It's a big week for Humphries, who already signed his big contract and is getting married this weekend in Charlotte, North Carolina. Once he gets back, he's focused on getting the Cardinals back to the playoffs and eventually to the Super Bowl.

The Cardinals finished 5-10-1 in 2019, but the offense showed considerable improvement. Murray threw for 3,722 yards, 20 touchdowns and 12 interceptions and also ran for 544 yards and four touchdowns.

Retaining Humphries was a big part of the team's offseason plans and now the focus turns to others such as running back Kenyan Drake, who is also a free agent after playing well following a mid-season trade from the Miami Dolphins. Drake ran for 643 yards and eight touchdowns — including four in one game against the Browns — during his eight games with the Cardinals.