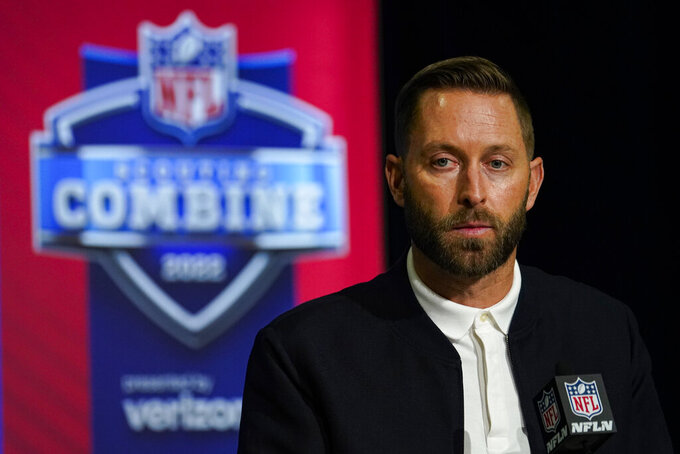 TEMPE, Ariz. (AP) — The Arizona Cardinals have signed coach Kliff Kingsbury and general manager Steve Keim to extensions that keep them under contract with the team through 2027.

The moves give some security to the two men who helped guide the franchise to rapid improvement over the past three seasons, but who also oversaw a head-scratching collapse last season after a 10-2 start to the schedule.

“The leadership of both Steve and Kliff have been key factors in the team’s turnaround over the last three seasons,” Cardinals owner Michael Bidwill said in a statement. “We are all looking forward to continuing that progress and recognize these two individuals will be a big part of achieving our long-term goals as an organization.”

Bidwill's support for his coach and his general manager come during an offseason that's developed into a surprise cold war between star young quarterback Kyler Murray and the franchise. The passive-aggressive spat has featured Murray wiping his social media account of any references to the Cardinals, and an all-caps letter from the quarterback's agent Erik Burkhardt, who said that the quarterback wants to sign a long-term deal in Arizona.

Murray is entering the fourth and final season of his rookie contract. The Cardinals are expected to pick up his fifth-year option for 2023, but Murray appears to want an extension that mirrors other star young quarterbacks, such as Buffalo's Josh Allen, who signed a six-year, $254 million deal last offseason.

However, Allen has won playoff games while Murray has not.

The Cardinals started last season as one of the hottest teams in the NFL with a 7-0 record and then a 10-2 mark. But Arizona lost four of its final five games and looked listless in a 34-11 playoff loss to the Los Angeles Rams. Murray had one of his worst games as a pro in his playoff debut, completing 19 of 34 passes for no touchdowns and two interceptions.

Kingsbury was hired prior to the 2019 season, largely because of his expertise in dealing with quarterbacks. Murray, a Heisman Trophy winner at Oklahoma, was drafted with the No. 1 overall pick in the same offseason. The Kingsbury-Murray pairing has brought steady improvement, from 5-10-1 in 2019 to 8-8 in 2020 to 11-6 in 2021.

Keim is in his 23rd season with the Cardinals and ninth as the general manager after being elevated to the spot in 2013.