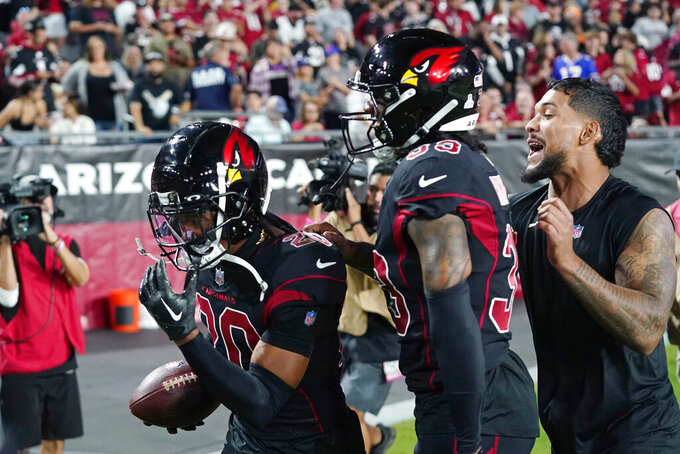 GLENDALE, Ariz. (AP) — The Arizona Cardinals were trailing late in the first half when cameras caught coach Kliff Kingsbury and Kyler Murray in a heated verbal exchange while star receiver DeAndre Hopkins played the role of peacemaker.

Murray's message to his irate coach: "Calm down, we’re good. We’re going to make it right.”

Murray — and the Cardinals defense — made sure his prediction was true.

Marco Wilson and Isaiah Simmons scored touchdowns on two pick-6s late in the first half and used that stunning change in momentum to lift the Cardinals over the New Orleans Saints 42-34 on Thursday night.

The Cardinals (3-4) snapped an eight-game home losing streak that was the franchise's longest since 1958.

The game was tied at 14 when Saints quarterback Andy Dalton threw the game-changing interceptions on consecutive drives that were barely a minute apart. The first one wasn't necessarily his fault, but the second one was.

The first came when Saints receiver Marquez Callaway bobbled a potential catch. Wilson was there to pluck it out of the air and then sprinted 38 yards to the end zone, diving over the goal line for a 20-14 lead.

The second happened when Dalton tried to throw over the middle. Simmons corralled the interception with one hand and then ran 56 yards down the right sideline for the score and a 28-14 lead. The Cardinals crowd — which hadn't seen a win since Oct. 24 of last season against the Texans — roared its approval.

“For the first time all season, we could play with the lead and lean on it,” Kingsbury said. “It definitely helped.”

From there, the Cardinals had control. The Saints pulled within 28-17 early in the third, but Murray found Greg Dortch for a 5-yard touchdown to push Arizona ahead 35-17.

It was another frustrating loss for the Saints in a season that's quickly unraveling.

“The three takeaways were killers in the game,” Saints coach Dennis Allen. “We've got to fix some of these issues, that's my responsibility.”

The Saints led 7-3 late in the first quarter and looked as if they were going to score another touchdown, but Cardinals cornerback Antonio Hamilton intercepted Dalton's pass in the end zone.

New Orleans did push ahead 14-6 in the second on a 3-yard touchdown pass to Taysom Hill. The touchdown was set up by a 64-yard catch and run by Kevin White, who barely stayed in-bounds as he ran down the left sideline to Arizona's 3-yard line. White was elevated to the active roster from the practice squad before the game.

The Cardinals welcomed back Hopkins, a three-time All-Pro who was suspended for the first six games of the season after violating the NFL’s policy on performance-enhancing drugs.

Hopkins finished with 10 catches for 102 yards. He couldn't be with the team for much of the suspension, but said he worked hard to stay in shape.

“I don't know where he's been or what he's been doing, but it worked," Kingsbury said.

Newly-acquired receiver Robbie Anderson — who had been with the team just three days since being acquired in a trade with the Panthers — was also active and on the field for a few plays. He didn't record a catch.

Dalton was just the fourth quarterback since 2010 to throw two pick-6s in the first half. The others are Josh Rosen, Tony Romo and Colin Kaepernick.

Dalton — starting his fourth straight game for the injured Jameis Winston — had a beautiful long throw on the first drive, connecting with rookie Rashid Shaheed for a 53-yard touchdown.

Shaheed was an undrafted free agent who made a big impact for a second straight week with his early touchdown.

He was brought up from the practice squad before last week's game against the Bengals and showed blazing speed when he took a handoff on a jet sweep 44 yards for a touchdown on his first offensive play with the ball in the NFL.

Cardinals: Travel to face the Vikings on Oct. 30.