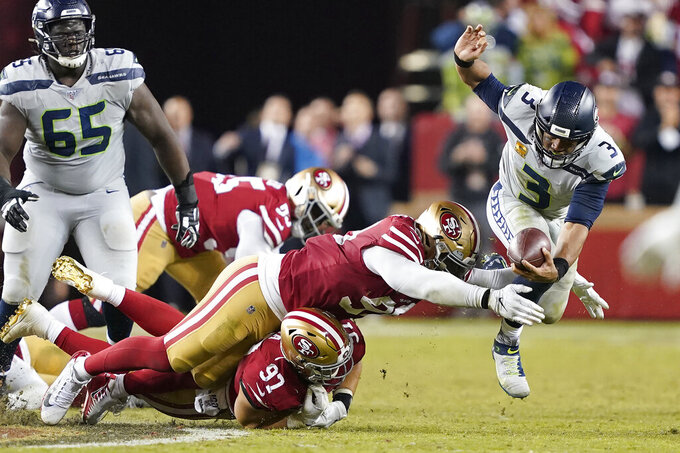 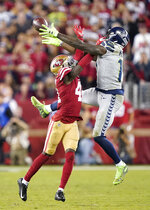 RENTON, Wash. (AP) — Quandre Diggs became part of the Seattle Seahawks less than a month ago. He has appeared in one game during that time. His only bond to the Seahawks before his arrival via trade from Detroit was a longstanding friendship with wide receiver Tyler Lockett.

He has no lengthy history or understanding of the program Pete Carroll has built other than its reputation throughout the league and by word of mouth.

Yet it hasn’t taken long for Diggs to notice one of the key characteristics of this group that appears to be defining this team — and has the Seahawks contending in the NFC with six games to go.

“Resilient. Since I’ve been here, all of our games have been close ... and we’ve been really resilient,” Diggs said after Seattle’s 27-24 overtime win over San Francisco last Monday. “You can tell these guys have the utmost confidence in themselves. I just want to bring that also. I’m proud and excited to be here.”

Whether it’s a newcomer like Diggs or one of Seattle’s holdover veterans like Russell Wilson or Bobby Wagner from when it was the best team in the NFC, there is a growing belief that no matter the situation these Seahawks can find a way to win.

They’re not the dominant team they were in 2013 and 2014 when they went to the Super Bowl in consecutive years. But arriving at the bye week at 8-2, one game behind San Francisco in the division and in firm grasp of a playoff spot at this moment, is not to be ignored. The Seahawks are tied for the second-best record in franchise history through 10 games. Only the 2013 team that went on to win the Super Bowl had a better 10-game stretch (9-1) to begin a season.

“I think the great thing about this game for our football team was just the resilience,” Wilson said after the wild win over San Francisco. “We’ve had it all year. We’ve been, I think, the toughest team just in terms of resilience all year, in my opinion. Just how we stay encouraged, how we stay focused, how we keep having the faith and believe something great is going to happen.”

Clearly resiliency is not the only reason why Seattle has been so successful. Wilson may be the favorite for the MVP based on the way he has played the first 10 weeks of the season. Chris Carson is fourth in the league in rushing and well on his way to another 1,000-yard season. Tyler Lockett has become a No. 1 receiver and made up for the loss of Doug Baldwin to retirement. Jadeveon Clowney has been worth the expense paid to Houston to land him via trade before the start of the season.

Despite all of those positives for Seattle, it’s not inconceivable to think the Seahawks could be winless at home and lost at least a couple on the road by this point. Their three home wins are by a combined eight points and both losses have come at places that used to be impenetrable for opponents. Take away the victory at Arizona in Week 4, and Seattle’s other seven wins have all been decided by one score.

It can be dangerous to balance on that thin a margin between success and failure. But it also speaks to the belief instilled by Carroll and the way it has resonated with this group. Yes, there are a couple of holdovers from Seattle’s stars from earlier this decade to speak Carroll’s gospel. But there has been buy-in all around among the newcomers. And to steal one of Carroll’s catchphrases that appear on signs all around Seattle’s facility, this group appears to be “All In.”

“Where that comes from is belief. You believe that things are going to go the right way. Without that, then you can’t be resilient,” Carroll said. “You have to believe and trust that there’s a chance that things can turn the way you want them to. This group has been a really positive, receptive bunch. Nobody is doubting anything, nobody is going off in a different direction, nobody’s got their own agenda. These guys are on board.”

The victory over San Francisco seemed to personify all those elements Carroll described. Seattle trailed early. It rallied to take the lead, coughed it up, had multiple chances to win or lose in overtime and somehow managed to kick the game-winning field goal after a 70-minute roller coaster.

“That’s the right spirit of taking on the opportunity to succeed and to overcome, and that comes from belief,” Carroll said. “They’ve got reason to believe that good things are going to happen. When you’ve got a good QB like Russ, and the approach like we have, it kind of has come together. Possibly, when we come back, we can ride this and take advantage of it and see if we can’t come up with some more stuff here to make this a really fun season.”