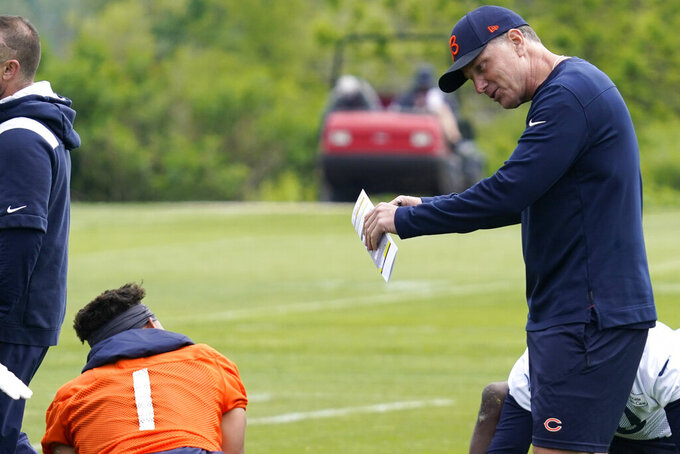 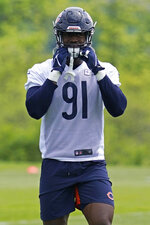 Now players are dealing with this change personally by moving positions or even changing weight to fit plans for a new regime during organized team activities.

Most of the change has come on the defensive side, where they’ve not only moved to a 4-3 scheme after being in a 3-4 for seven years. They've also changed six starters on defense. For some players, change has been easier than for others.

“Apparently it’s a lot of new faces,” linebacker Nick Morrow said. “So I guess we’re all figuring it out together. But it’s been good.”

Morrow is one of those changes.

The Bears signed the former Raiders linebacker as a free agent and now he’s calling the defensive signals and playing the traditional Chicago position of middle linebacker in 4-3, where Hall of Famers Brian Urlacher, Mike Singletary, Dick Butkus and Bill George once played.

It’s a defensive style he has played during past seasons. The Bears shifted Roquan Smith from inside in the old 3-4 to playing weakside linebacker in a 4-3.

“It’s been cool,” Morrow said. “One, he’s (Smith) fast. Then, two, his pre-snap reads are really good, so being able to anticipate pre-snap is helpful.

“Then, he always communicates to me to kinda get me going, so it’s been helpful.”

Coaches and teammates have been impressed with rookie cornerback Kyler Gordon and safety Jaquan Brisker, who have seen plenty of work at OTAs with the starters.

“They’re on the game plan, they’re in the right spots. And they’ll just get better, man. It’s early. Still gotta get some technique and all that stuff and that’ll come. It’s just part of being a rookie and learning the system. But early on they are getting the ball out so that’s always a plus.”

The Bears had only eight interceptions last season, the fewest they’ve had in a 16- or 17-game schedule. The goal of their change to a 4-3 is to cause more turnovers, and as Eberflus' units finished in the top 10 in takeaways all four of his years as the Colts defensive coordinator.

“Mentally, what you assess this time of year — can the guy pick it up?,” Eberflus said. “Is he fast mentally? Can he think on his feet? Is he able to adjust and make the adjustments on the fly? That’s No. 1.

“And then, No. 2, physically, what you can see is the athletic ability. I like to see athletes we’re acquiring here, really good athletes that can run that have speed. Can they operate and be quick and be quick and not in a hurry as (UCLA basketball) coach (John) Wooden would say.”

The changing style of defense is easier to apply when players are available for the voluntary spring workouts, but veteran defensive ends Robert Quinn or Al-Quadin Muhammad haven't attended any OTA or the earlier voluntary minicamp.

“As the process goes, this is why it’s so important for everybody to be here, because you form a team by being together and understanding how we operate,” Eberflus said.

Without those two, the Bears have been giving rookie defensive end Dominique Robinson an extensive look with the starters.

“To me, it’s hard to assess a couple things this time of year,” Eberflus said. “Pass rush is hard to assess because it’s a little bit easier for the rushers to get around because there’s no pads on, but once you put the pads on and those tackles can really block em, I think that’s when you really assess what it is and the same thing in the running game.”

Another player who missed the earlier minicamp was cornerback Jaylon Johnson, but he has been available at OTAs. However, the starting Bears right cornerback for the past two seasons was playing Tuesday with the backup defense while Gordon played with starters on the right side.

“I wouldn’t read into that right now,” Eberflus said. “He’s just getting back into action right now.

“So we’re just seeing where he is with his conditioning and those types of things. But 1s and 2s, we’re moving all guys around.”

NOTES: Veteran defensive tackle Mario Edwards Jr. has reported for his first offseason practices. ... Offensive linemen have had to drop weight just like many defensive players, because they’ve gone to a wide-zone blocking scheme requiring extensive blocker movement. Second-year tackle Larry Borom switched to right tackle from left and dropped 21 pounds, from 345 to 324. He cut out drinking beer, altered his diet and took up Pilates. “You ever do a Pilates workout?” he said. “It is ... oh my God. But it’s good for you, so I’m happy to do it.”