Chargers' defensive goal vs. Patriots: Get pressure on Brady 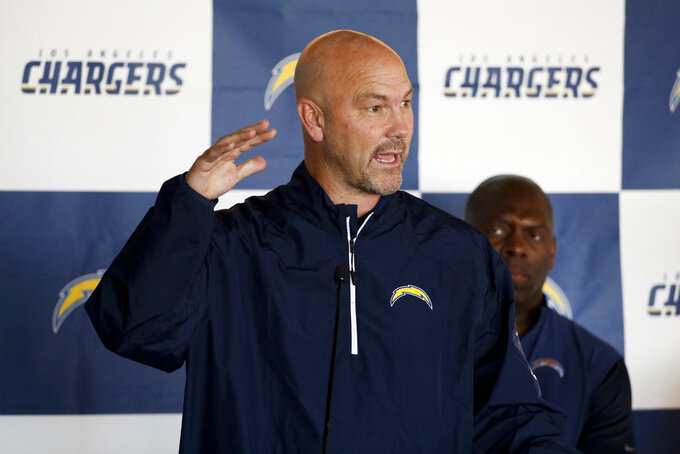 Bradley's game plan of using seven defensive backs to neutralize Baltimore quarterback Lamar Jackson resulted in a 23-17 win. His challenge this week is coming up with the right strategy to contain Patriots QB and five-time Super Bowl champion Tom Brady.

Bradley isn't tipping his hand about using seven DBs for a second straight week, saying each opponent is different.

Brady said during a conference call Wednesday that the Chargers using seven defensive backs on all but one of the 59 snaps did surprise him and that it could present some difficult matchup problems if they used it again Sunday.

"It's unique. They play tough against the run, but also have the speed and quickness to play against the pass," Brady said. "They get home quickly. The quarterback is always under pressure because they have a pass rush. The secondary knows you can't hold on to the ball forever and they jump routes."

In last year's Week 8 game — which the Patriots won 21-13 — the Chargers played dime (six defensive backs) on 53 of 82 plays. Brady threw for 333 yards and a touchdown, but the thing for him that stuck out about that game was that New England made four trips to the red zone and had just one TD and three field goals.

"They're good at every level. They use a lot of defensive backs at different times and that creates a lot of problems," Brady said. "They challenge you in every way. Between coaching and scheme, it is a great defense."

The Chargers' philosophy of getting as much pressure as possible will not change this week. They did a great job of that last week against Jackson, recording seven sacks despite rushing five or more only four times in 59 plays.

According to Sportradar, the Chargers blitzed on only 17.7 percent of plays, which was third-fewest in the league. In last year's game, they did rush five or more on 10 plays and sacked Brady three times.

Defensive end Joey Bosa has 6 ½ sacks in seven games since returning from a foot injury, while Melvin Ingram had a pair of sacks and a fumble recovery.

"Our defensive line has to put pressure on him. He's not very mobile, but he does step up into the pocket and throw," cornerback Desmond King said. "We have to bring pressure up the middle and play good defense in the back end."

Brady is averaging 2.61 seconds to throw according to the league's Next Gen stats. He will be the third-quickest QB they have faced this season, as Oakland's Derek Carr and Pittsburgh's Ben Roethlisberger averaged 2.55 seconds. The Chargers sacked Carr in two games and got to Roethlisberger once.

Brady presents much of the same challenges as Roethlisberger in extending plays and reading coverages.

"The way he handles the offense, he's been in that style of offense for many years, so they're on the same page," Bradley said of Brady and the Patriots. "Their offense operates with precision, and they're all on the same page. As you watch it, you can see it all come together for them."

Besides getting pressure on Brady, another focus will be on taking the running backs out of the passing game. Patriots running backs were targeted a league-high 157 times, while the Chargers allowed 7.0 yards per pass attempt to running backs, which was eighth-worst in the NFL.

The best matchup might be Patriots tight end Rob Gronkowski against Chargers safety Derwin James. Los Angeles goes into the game allowing only 6.3 yards per pass attempt against tight ends, which was second in the league.

"We have to play sound football and correct mistakes. We have to take a look at the notepad between plays and see what windows of opportunity he had and close them up," defensive tackle Damion Square said. "You can't try to be overwhelming and get out of place or Tom will find out. Everyone has a job to do."