Chargers' Ekeler looking for another strong game vs. Browns 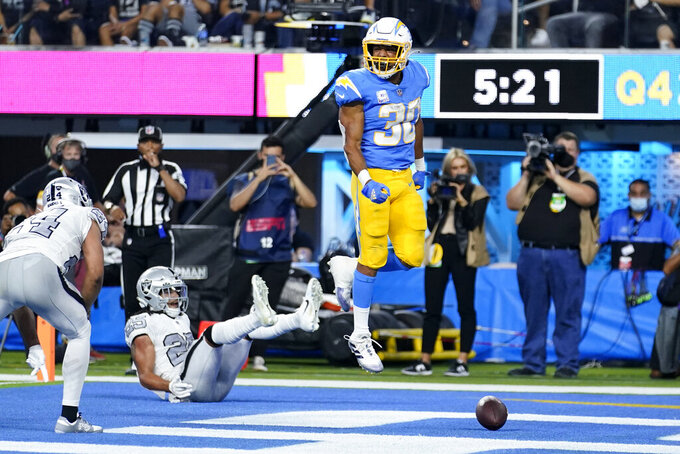 Los Angeles Chargers running back Austin Ekeler, right, reacts after scoring a touchdown during the second half of an NFL football game against the Las Vegas Raiders, Monday, Oct. 4, 2021, in Inglewood, Calif. (AP Photo/Marcio Jose Sanchez)

COSTA MESA, Calif. (AP) — Austin Ekeler helped more than a few fantasy football players who drafted him this past week.

The Los Angeles Chargers running back, who said during training camp that “if you want to get fantasy points you better have me on your team,” certainly lived up to his end of the bargain Monday night in a 28-14 victory over Las Vegas with a career-high 115 rushing yards and two touchdowns.

He is hoping to do the same thing on Sunday when the Chargers host the Cleveland Browns in a matchup of 3-1 teams.

“It was amazing. There were gaps, double-teams,” Ekeler said about facing Las Vegas. “The Raiders play a little bit further back, so it was allowing our guys up front to get really good double-teams solidified so we could get through to the second level to linebackers. They did a really good job of that. I’m looking forward to seeing more of that coming. Even with pass protection, it’s coming together.”

While Ekeler's performance against the Raiders generated headlines, he has been solid throughout the first four weeks. He goes into this week second among league running backs in scrimmage yards (424) and is eighth in rushing yards with 283.

Ekeler is among the league leaders despite averaging only 17 scrimmage touches per game. But that amount suits him just fine due to his 5-foot-10, 200-pound frame.

“I’m pretty open about it just as far as my workload. I can’t take every single rep the entire season, I don’t think many running backs can. Maybe (Tennessee Titans running back) Derrick Henry can," Ekeler said. "But there has to be some balance. I’m still able to produce during that time, but that’s because I’m available and healthy.”

Ekeler has also benefited from better depth at running back, which was lacking last season due to injuries and Melvin Gordon's departure to Denver. Rookie Larry Rountree has emerged as a short-yardage specialist and Justin Jackson has been injury free.

Ekeler has also been healthy after missing six games last season due to a hamstring injury.

“You come into the season with high expectations, and we’re keeping almost all the way up to our expectations," he said. "Just playing well, competing, and sticking to the game plan. Making it work and winning games. As long as we continue to have that formula, we’re going to continue to have high confidence.”

Ekeler and the Chargers running game will face a tough test against Cleveland, which is second in the league in total defense and third against the run.

Ekeler said Los Angeles had a solid game plan against Washington's defensive line in the opener as the offensive line for the most part kept Chase Young at bay. This week though the Chargers will have contend against two edge rushers in Myles Garrett and Jadeveon Clowney.

“Any defense we go against where there’s a lot of edge rushers, we have to have a plan," Ekeler said. "It comes down to how we’re going to put a different view in front of these guys to slow them down and get some misdirection; make them stop their feet. Putting a chip on them, bunch them with the tight end, things like that. When it comes down to that, I feel like we can really open up our run game when we’re just giving them a bunch of smoke and mirrors.”