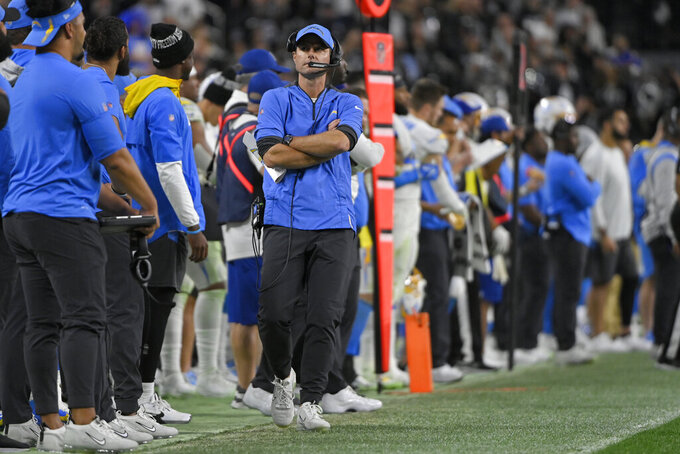 Los Angeles Chargers head coach Brandon Staley walks along the sideline during the second half of an NFL football game against the Las Vegas Raiders, Sunday, Jan. 9, 2022, in Las Vegas. (AP Photo/David Becker)

Chargers coach Brandon Staley has started the process of making changes to his staff after Los Angeles fell short of making the playoffs for the third straight year.

Staley fired special teams coordinator Derius Swinton II and assistant special teams coach Mayur Chaudhari on Friday. Staley said on Wednesday that he was beginning the process of staff evaluations after exit interviews with players on Monday and Tuesday.

The Chargers (9-8) were in position for a wild-card spot, but dropped three of their final four games, including a 35-32 overtime decision at Las Vegas last Sunday.

Staley and Swinton inherited the league's worst special teams unit. It didn't show much progress the first six weeks of the season because of inexperience and depth, but showed progress in most areas following the bye week in October because of the signings of return specialist Andre Roberts and kicker Dustin Hopkins.

Roberts, a second-team selection to The Associated Press All-Pro team, was second in the league with a 27.3-yard kick return average, including a 101-yard touchdown in the Jan. 2 win over the Denver Broncos. The Chargers finished fourth in the league in kick returns after being last through the first six games.

Hopkins was 18 of 20 on field goals after Tristan Vizcaino was inconsistent. The rookie missed four extra-point attempts the first six weeks.

“Coming in, we knew what it was. I talked about it probably ad nauseum from the beginning of the process that we were going to take our lumps and that we had to learn from things. I think that they’ve really grasped that and really just grown with it," Swinton said before the season finale against Las Vegas.

Swinton has been an NFL coach for 12 seasons, including 2016 as special teams coordinator in San Francisco. Chaudhari was with Atlanta for three seasons before coming to Los Angeles.