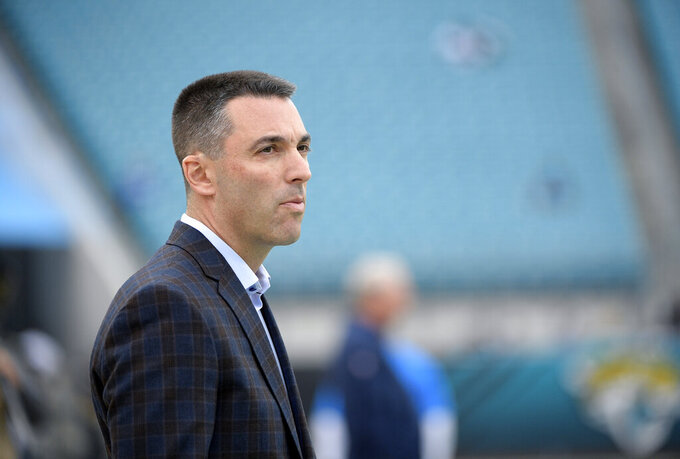 FILE - In this Dec. 8, 2019, file photo, Los Angeles Chargers general manager Tom Telesco watches players warm up for an NFL football game against the Jacksonville Jaguars in Jacksonville, Fla. Telesco was optimistic after the Chargers rookies reported to training camp over the weekend without any positive tests for the coronavirus. But Telesco knows how quickly things can turn. “The reality is you can't let your guard down at any time,” Telesco said during a conference call Monday, July 27. (AP Photo/Phelan M. Ebenhack, File)

COSTA MESA, Calif. (AP) — Tom Telesco was optimistic after the Los Angeles Chargers rookies reported to training camp over the weekend without any positive tests for the coronavirus.

Even though the Chargers remain virus free so far, news of 13 Florida Marlins and the Minnesota Vikings trainer/infection control officer testing positive reiterated to the team's general manager how quickly things can turn.

“The reality is you can't let your guard down at any time,” Telesco said during a conference call on Monday. “We feel a real responsibility to keep everyone safe. The plan has been efficient and we are working through it every day.

“I'm optimistic as a league we can do it. We have two opponents — fighting this virus and whoever our opponent is on Sunday. ... We're not going to eliminate the virus, we know that. We're trying to minimize the risk as much as we can."

Los Angeles' 33 rookies and first-year players got on the field to start conditioning drills on Monday. Veterans will begin reporting for testing and physicals on Tuesday.

“These first two weeks we need to gently ramp them up and get them ready to play. Everyone is coming from different areas and with different restrictions,” Telesco said. “We’re going to have to do different things. Without preseason games or combined team practices we will have to change up our schedule. Have to put them in more competitive situations and do the best we can.”

Telesco, who is entering his eighth season as general manager, added that he hasn't been contacted about any players electing not to play the upcoming season. He also hasn't had to add anyone yet to the league’s newly created COVID-19 reserve list.

“Speaking from a GM perspective, they have given the teams a lot of flexibility about handling COVID-19 and injured reserve along with gameday rosters if emergencies come up," he said. “I feel good about the playing rules going in because it isn’t going to be resolved by September or October.”

One of the more pressing roster matters is if prolific pass rusher Joey Bosa will report? The defensive end — who was the third overall pick in 2016 — is entering the fifth and final season of his rookie contract and has raised the possibility of holding out without a new deal.

In light of everything else, Telesco would love to avoid a preseason without a holdout, but he said he hasn't heard anything from Bosa or his agents. Running back Melvin Gordon missed all of training camp and didn't report until the fourth week of the regular season last year.

Telesco's philosophy on extensions is to try to get them negotiated before Labor Day, but he didn't disclose if this year's circumstances during the offseason would change that. He did add that even with reductions to the salary cap the next couple of seasons, the team remains in a good situation to sign players.

Coach Anthony Lynn raised the possibility a couple of months ago of bringing Colin Kaepernick in for a tryout if there was an injury. Telesco said there wasn't any update on that end and that he was comfortable with the quarterbacks they presently have on the roster.

"If something changes at some point down the road, yeah, we would look at him and treat him no differently than any other free agent quarterback that’s available,” Telesco said.

Justin Herbert is already in camp and was on the field Monday. The former Oregon standout, who was the sixth pick in April's draft, will likely not get as many opportunities to show what he can do as younger players are expected to get fewer opportunities. Tyrod Taylor goes into camp expected to succeed Philip Rivers under center when the season is scheduled to open Sept. 13 at Cincinnati.

By Joe Reedy 2 hrs ago
By Dave Campbell 4 hrs ago
By Dennis Waszak Jr. 5 hrs ago
7 hrs ago
8 hrs ago