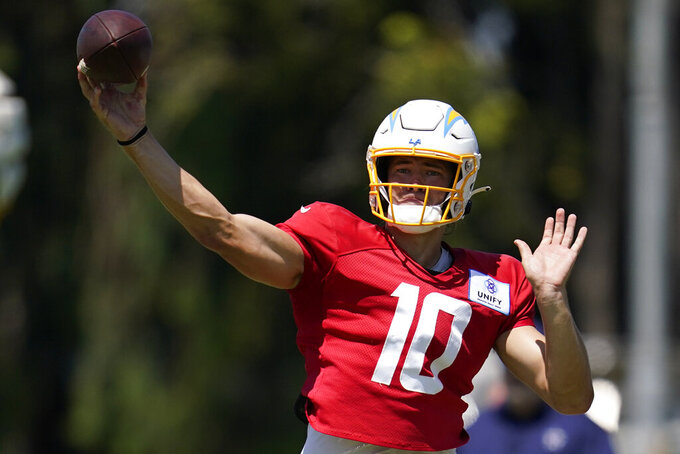 COSTA MESA, Calif. (AP) — Justin Herbert has the most passing yards, completions and touchdowns through his first two years than any quarterback in NFL history.

Yet, for all that Herbert has done, it hasn’t resulted in the Los Angeles Chargers getting to the postseason.

After an aggressive offseason, the Chargers are not only looked at as a playoff team but as a Super Bowl contender. Los Angeles not only returns most of its offense, but has significantly upgraded its defense as it looks to get back to the postseason for the first time since 2018.

“I’m really excited for this team. I think we are miles ahead of where we were at this point last year,” said Herbert, who threw for a franchise-record 5,014 yards and had nine 300-yard passing games last season.

“Having been in the same offense, same defense, we’ve added a couple of guys on defense that will make a huge impact. It’s been fun to go up against those guys because they made us better.”

The Chargers were on track for a playoff spot last season before losing three of their last four, including a 35-32 overtime defeat at Las Vegas, to finish 9-8 in Brandon Staley’s first season as coach.

While the offense played at a high level, the defense struggled. The Chargers were ranked 23rd in total defense and near the bottom of the league in stopping the run, third down conversion, and fourth-quarter points allowed.

Linebacker Khalil Mack and cornerback J.C. Jackson are the most significant additions on defense. Mack, acquired in a trade from Chicago, will team up with Joey Bosa to form one of the league’s premier pass-rushing duos, while Jackson has an NFL-high 25 interceptions over the past four seasons with New England.

However Jackson underwent ankle surgery Tuesday, putting his availability for the first two games of the season in doubt. Jackson will miss two to four weeks, the team said in a statement.

“You have to be a complete defense, a team at all three levels that play together. You have to play with toughness, discipline, and physicality,” Staley said. “The best defenses I’ve been a part of have those elements. I know that we’re in a lot better spot.”

Including Mack and Jackson, the defense will have at least six new starters. Sebastian Joseph-Day and Austin Johnson are on the defensive line with Kyle Van Noy at inside linebacker and nickel cornerback Bryce Callahan.

“The types of players out there, and the types of fundamentals, most importantly, are more what we’re used to seeing and expect to see. It’s not just the interior players that you guys know about. It’s everybody that’s improving,” he said.

Herbert is in the same offense for the first time in his three-year NFL career, which has allowed him to hone in on improvements to his footwork and his snap cadence in trying to draw defenses offside.

“He’s just a lot looser than usual. He’s just a lot more comfortable. When you come in year one, kind of shy, don’t want to talk a lot,” wide receiver Mike Williams said. “But now, he’s taken control and been himself.”

Williams had a breakthrough season last year with 76 receptions for 1,146 yards and nine touchdowns, which he parlayed into a three-year, $60 million contract extension.

Staley took plenty of criticism for fourth down calls that went awry late in the season against the Chiefs and Raiders, but he isn’t about to change his mindset this year.

“All of those decisions are about feel. There’s the math that’s also a part of it, but it’s more mindset than math, I can assure you that,” he said. “It’s the way that we want to play as a team.”

The Chargers start with two major division tests. They open at home against the Raiders on Sept. 11 before traveling to Kansas City four nights later to take on the Chiefs. Los Angeles’ next six games are against teams with losing records last season before a Nov. 13 contest at San Francisco starts a brutal stretch that includes hosting Kansas City (Nov. 20) and road games at Las Vegas and Arizona. The Chargers will be the home team on Jan. 1 against the defending Super Bowl champion Rams in the Battle of Los Angeles.