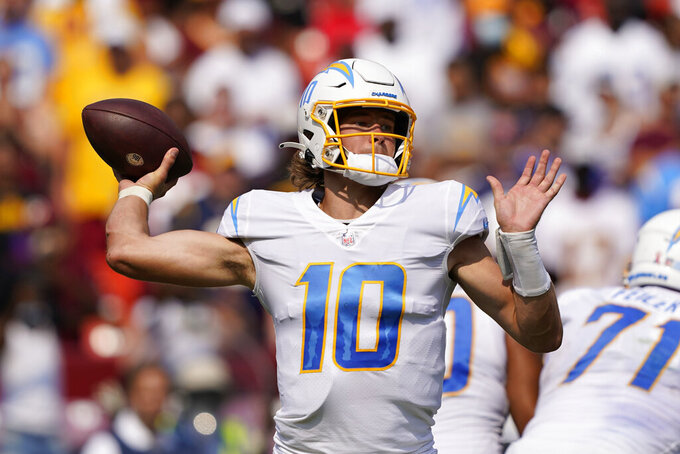 OPENING LINE: Los Angeles by 1, according to FanDuel SportsBook

TURNOVER DIFFERENTIAL: Cowboys plus-3; Chargers minus-1.

COWBOYS PLAYER TO WATCH: RB Ezekiel Elliott didn’t see the ball much in the opener coming off a career-low 979 yards last season. The 2016 All-Pro and two-time rushing champ had 11 carries for 33 yards against last year’s No. 1 run defense. The Cowboys appeared to have little interest in trying to run, but QB Dak Prescott changed 12 of the 28 run calls to passes.

CHARGERS PLAYER TO WATCH: QB Justin Herbert looked to be comfortable running a new offense last week, as he completed 31 of 47 passes for 337 yards, marking his ninth 300-yard game in 16 starts. He also became the only passer in NFL history to have more than 400 completions and throw for more than 4,500 yards in his first 16 games.

KEY MATCHUP: Los Angeles OT Rashawn Slater vs. Cowboys DEs Dorance Armstrong and Tarell Basham. Slater didn't allow a pressure in his first NFL start last week. After facing Washington's Chase Young and Montez Sweat, Slater will be facing a Cowboys defensive line that is missing starters DeMarcus Lawrence and Randy Gregory. Lawrence broke a foot in practice Wednesday and could be out until November. Gregory tested positive for COVID-19. Coach Mike McCarthy didn’t sound optimistic about Gregory before the first practice of the week.

KEY INJURIES: The Cowboys have been hammered by injuries. Besides Lawrence and Gregory, WR Michael Gallup is out at least three weeks on injured reserve after straining a calf muscle in the opener and S Donovan Wilson was out of practice to start the week because of a groin injury. Four-time All-Pro OG Zack Martin missed the opener after a positive test. Chargers RT Bryan Bulaga (groin/back) was placed on injured reserve Friday while CB Chris Harris Jr. (shoulder) is out after practicing not week. DE Justin Jones (calf) is doubtful and S Nasir Adderley (groin) is questionable

SERIES NOTES: The Chargers are looking for their fourth straight win over Dallas after the Cowboys won six of the first eight. ... Los Angeles has won the past three games by an average margin of 11.3 points. ... The Cowboys' most recent win against the Chargers was 28-24 during the 2005 opener in San Diego. ... Los Angeles had 515 yards in the Thanksgiving Day game in 2017. That game also saw Keenan Allen have a touchdown and 172 yards on 11 catches — the most receptions by a player against the Cowboys on Thanksgiving.

STATS AND STUFF: Dallas is trying to avoid its first 0-2 start since 2010, when it lost seven of its first eight and fired coach Wade Phillips at midseason. ... Los Angeles hasn't won its first two games at the start of a season since 2012. ... The Cowboys played the first regular-season game at SoFi Stadium last year, losing the opener to the Rams 20-17. ... Dak Prescott has thrown for at least 400 yards in the past four games he finished going back to early last season, but the Cowboys are 1-3 in those games. Prescott needs one more 400-yard game to match Hall of Famer Dan Marino’s record of nine in a QB’s first six seasons. ... WR Amari Cooper’s career-high 13 catches against the Bucs set a club record for an opener. He had 139 yards receiving. ... The Cowboys matched their game high from 2020 with four takeaways against Tampa Bay. ... The Chargers had 14 third-down conversions last week, which were the most by a team in a game in the past decade. ... RB Austin Ekeler has scored a touchdown in three straight games. ... WR Mike Williams set a career high with eight receptions last week. ... DE Joey Bosa needs 1 1/2 sacks to become the 25th active player to reach 50 sacks. ... LB Kenneth Murray led the Chargers with 10 tackles last week and has at least eight in three of his past four games.

FANTASY TIP: Chargers TE Jared Cook had five receptions for 56 yards in his Los Angeles debut last week. He could equal or surpass that total against a Dallas defense that has been beset by injuries and struggled to contain Tampa Bay's Rob Gronkowski last week.