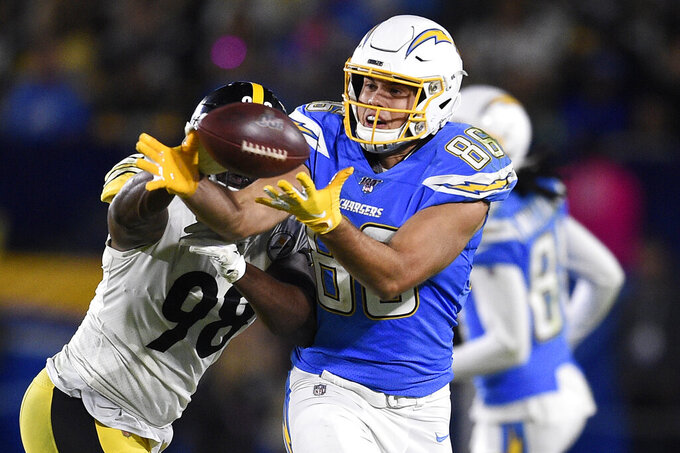 FILE - In this Oct. 13, 2019, file photo, Los Angeles Chargers tight end Hunter Henry, right, catches a pass while under pressure from Pittsburgh Steelers inside linebacker Vince Williams during the second half of an NFL football game, in Carson, Calif. The Chargers announced on Friday, March 13, 2020, that they have put the non-exclusive franchise tag on tight end Hunter Henry. General manager Tom Telesco said during the NFL Scouting Combine that they were considering tagging Henry but are still hoping to sign him to a long-term extension.(AP Photo/Kelvin Kuo, File)

COSTA MESA, Calif. (AP) — The Los Angeles Chargers have taken another step toward solidifying their offense by placing the franchise tag on one of their top playmakers.

The franchise announced it had put the non-exclusive franchise tag on tight end Hunter Henry. General manager Tom Telesco said during the NFL scouting combine that the team was considering tagging Henry but is still hoping to sign him to a long-term extension.

Henry was one of Philip Rivers' most reliable targets last season, setting career highs with 55 receptions and 652 yards despite missing four games with a knee injury.

“I think he’s one of the better combo tight ends in the game as far as blocking and receiving, and just what he brings to the locker room in terms of his character and work ethic,” coach Anthony Lynn said during the combine.

Henry is averaging 12.6 yards per reception and has scored 17 touchdowns during his four seasons with the Chargers. The only knock on him has been his ability to remain healthy. Henry has missed games every year and was out for the 2018 regular season due to a knee injury.

Franchise tag numbers have not been announced, but the number for tight ends is likely to come in at $11 million. The new league year is still scheduled to begin Wednesday. A non-exclusive tag means Henry can negotiate with other teams, but the Chargers have the right to match any offer or receive two first-round picks if he goes to another team.

With the Chargers deciding to move on from Rivers, it remains to be seen who will be throwing passes to Henry. Tyrod Taylor is under contract for one more season but Los Angeles could add another quarterback either in free agency or the draft, where it has the sixth overall pick. Los Angeles made a move with its running game last week by signing running back Austin Ekeler to a four-year extension.

Mebane spent four seasons with the Chargers and was a team captain. He started 13 games last season with 47 tackles and a sack.

Davis came to Los Angeles last season after spending 14 seasons with Carolina. He started every game and had 112 tackles, which were his most since having 123 with the Panthers in 2013.

Mebane and Davis' releases will result in $9.5 million in cap savings.

“Often, these decisions hurt on a personal level. This is certainly one of those times," Telesco said in a statement. "Ultimately, you never know what the future will hold, but making these moves right now gives us flexibility entering the new league year.”