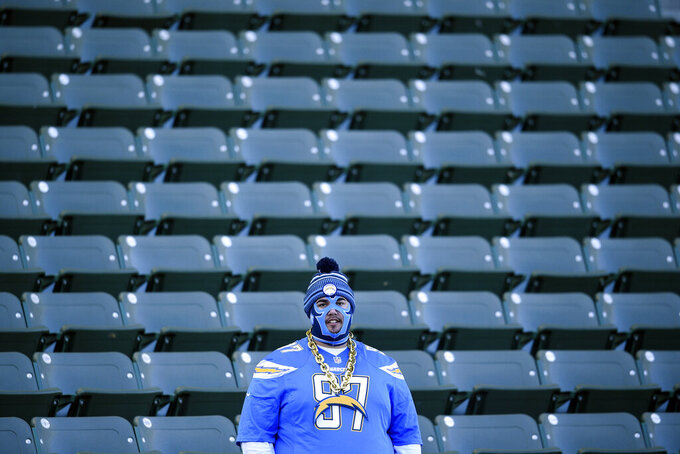 COSTA MESA, Calif. (AP) — The Los Angeles Chargers will bid farewell to their temporary home of three seasons on Sunday against the Oakland Raiders. Don’t expect much fanfare as both teams go into the final two weeks of the season looking ahead to next year.

The 27,000-seat facility used mainly for soccer hasn’t been much of a home-field advantage, especially this season. The Chargers are 2-4 at Carson while visiting team fans have drowned out local fans. Last week’s game against Minnesota was dominated by Vikings fans in the lower deck. The same is expected on Sunday with a large percentage of Raiders fans still in Los Angeles.

“There have been some unique atmospheres, to say the least,” quarterback Philip Rivers said. “As far as it goes from a field standpoint and all of that, it’s been good. Again, it’s a short stint somewhere, and it was new to all of us. It’s been just fine.”

The 5-9 Chargers, who will move into their new home at Hollywood Park with the Rams next season, have dropped four of their last five and are assured of their first losing season in Anthony Lynn’s three years as coach.

The Raiders (6-8) played their final game in Oakland last week before the move to Las Vegas and have dropped four straight. They are still mathematically alive for the final playoff spot in the AFC, but the focus has been on trying to finish the season strong and get to .500.

“We’ve been realistic all along about rebuilding this team. We didn’t have a lot of depth when the season began and have lost a lot of good men,” coach Jon Gruden said. “It would be great to finish .500.”

Here is what else to watch as the Raiders look for their first sweep over the Chargers since 2016:

IS THE END NEAR?

This could be the final home game for Rivers and running back Melvin Gordon with both being in the final year of their contract. Both have also struggled in what has been a disappointing season.

Rivers has thrown 18 interceptions, tied for his most through 14 games. Gordon held out due to a contract dispute and missed the first four games. He rushed for a season-high 108 yards in the first meeting against Oakland but fumbled twice last week against Minnesota and was benched for most of the second half.

“It would feel weird for both of us not to be here,” Gordon said. “We’re both trying to live in the moment and just make the most of it.”

Melvin Ingram and Joey Bosa have a combined 11½ sacks of Derek Carr, but the Chargers pass rush has been nonexistent lately.

The Chargers have a league-low three sacks in the past four games', with two coming from Bosa. Los Angeles sacked Carr three times in Week 10, Ingram having two.

Darren Waller had his fourth 100-yard receiving game of the season last week, reaching 1,001 yards total for the season. He joined Todd Christensen as the only tight ends in Raiders history to top the 1,000 mark, Christensen doing it three times in the 1980s, including a franchise-record 1,247 in 1983. With Jacobs reaching the 1,000-yard milestone on the ground, this marks the 10th time that the Raiders have had a 1,000-yard rusher and receiver in the same season.

Star rookie running back Josh Jacobs will miss this week's game as he deals with a fractured shoulder. Jacobs has tried to play through the injury that initially happened on the opening drive in Green Bay on Oct. 20. Jacobs sat out a game two weeks ago against Tennessee before returning last week. But he had a setback and will sit Sunday, giving DeAndre Washington another chance as starter, as well as more opportunities for Jalen Richard. Washington had 14 carries for 53 yards and a TD and six catches for 43 yards in his one start.

"Anytime they’re thrown into a role where they have to start or play extended downs, anytime we’ve asked them to do that, they’ve done a fantastic job," quarterback Derek Carr said. "And so you miss Josh if he can’t play, but at the same time you don’t worry because we have two good backs that can handle it.”

The Raiders have gone flat offensively after halftime for the past five weeks. Oakland has scored only one touchdown on 28 second-half drives over the past five games, that coming in the closing seconds of a 40-9 loss at Kansas City on Dec. 1. The Raiders have been shut out entirely in the second half the past two weeks and are averaging only 1.21 points per drive after halftime for the season, the worst for the franchise since the JaMarcus Russell-led team averaged 0.92 in 2009.

"A lot of it is probably my fault, I’m sure," Gruden said. “We got to pick up our execution. We got to do some things better and we’ve got to get more opportunities, certainly.”