Chargers still struggling to build fan base in Los Angeles 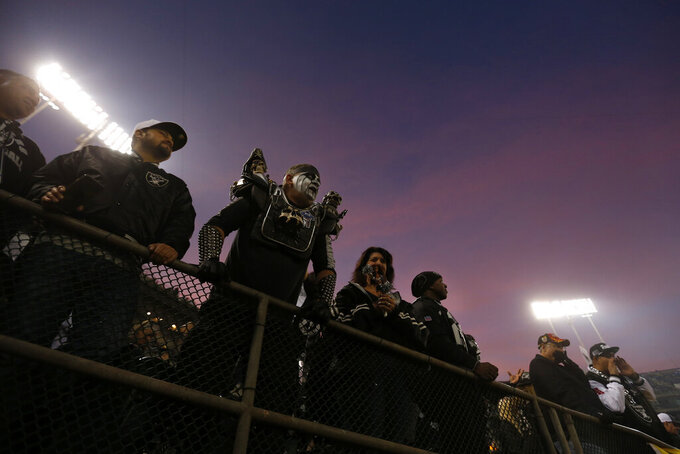 Fans watch as players warm up for an NFL football game between the Oakland Raiders and the Los Angeles Chargers in Oakland, Calif., Thursday, Nov. 7, 2019. (AP Photo/D. Ross Cameron)

LOS ANGELES (AP) — The Los Angeles Chargers are the designated home team for Monday night’s game in Mexico City against the Kansas City Chiefs, perhaps a fitting circumstance for a team that never quite feels at home.

With local excitement about the NFL coming back to Mexico after two years, the Chargers could get a warmer welcome than they’re accustomed to — despite playing in Azteca Stadium, nearly 1,900 miles away from Los Angeles.

The Chargers have often felt like the visiting team in their tiny, temporary stadium in Carson. Their lack of fan support has been evident this season as Steelers and Packers fans comprised at least 80% of the crowd. The Steelers game had a particularly bad look as a nationally televised Sunday night contest.

Many expect the Chargers to have more of a home-field advantage next season when they move into the palatial SoFi Stadium in Inglewood, which they will share with the Rams. But during the NFL’s fall meeting last month, the Chargers’ personal seat license revenue projections — which are going toward construction costs — were cut by more than half.

“We didn’t have any delirious notions of coming here and people wildly embracing us. We realized we had to come here and earn fans’ respect,” he said. “It’s a marathon and not a sprint.”

Lower prices are one reason why the Chargers’ PSL revenues have fallen short of projections. A PSL for an upper-deck midfield seat for Chargers games costs $100. The same seat for Rams games is priced at $4,000.

While affordable PSLs could draw more season-ticket holders, the price disparity has caused friction between the Rams and Chargers as the cost of the Hollywood Park project is approaching $5 billion, with Rams owner Stan Kroenke footing most of the bill.

Maas and Rams CEO Kevin Demoff tried to quiet any rumors of rancor during a recent event at the stadium.

“There are always challenges when there are two competing teams, but both sides are doing everything in tandem,” Demoff said. “By everything I see, the Chargers are going to be partners with us for a long time.”

The Chargers and the league have also tried to debunk talk of a relocation to London following a Oct. 28 report in The Athletic that raised the possibility. Owner Dean Spanos angrily denied those reports.

Chargers season-ticket holder Casey Rasile, who got an early look at his seats in the new stadium during a recent event, said seeing large numbers of opposing fans was not uncommon, even when the team was in San Diego.

“We’re going to build a fan base, especially when they move into the new stadium,” he said. “It’s a smaller stadium right now, but early in the season during the first two home games (against the Colts and Texans), there were a large number of Chargers fans there.”

Maas said there remains steady interest in the team and its move to the new stadium. He pointed out the 60,000 fans who attended training camp earlier this season and the 30,000 who registered for the chance to attend a draft party on the Santa Monica Pier.

The lack of true home field has caused a strain with players at times. Wide receiver Keenan Allen and cornerback Casey Hayward Jr. have said it has felt like they play 16 road games.

The Chargers have struggled on the field, too. They are 4-6 going into their game against the Chiefs and need a victory if they have any hopes of making a run and making consecutive postseason appearances for the first time since 2009.

Los Angeles split its games against Kansas City last season and faces the Chiefs twice in the final six games. They will meet in Kansas City in Week 17.

“We have to find a way to beat Kansas City,” quarterback Philip Rivers said. You have to go one at a time, but certainly I’m a fan of looking at the big-picture perspective.”

The Chiefs (6-4) also need a win after dropping four of their last six, and with Oakland suddenly challenging for the AFC West lead.

Coach Andy Reid expects a fun atmosphere in Mexico City. His team gets to play there this season after last year’s game against the Rams was moved to Los Angeles because of poor field conditions.

“They all come to the game because there's one game. There's a buzz that takes place throughout the whole game. There's noise, which is great. I think it's equal for both teams,” he said. “But you're going to have to deal with some noise. There are a lot of people in that stadium and they're excited for both teams to be there."