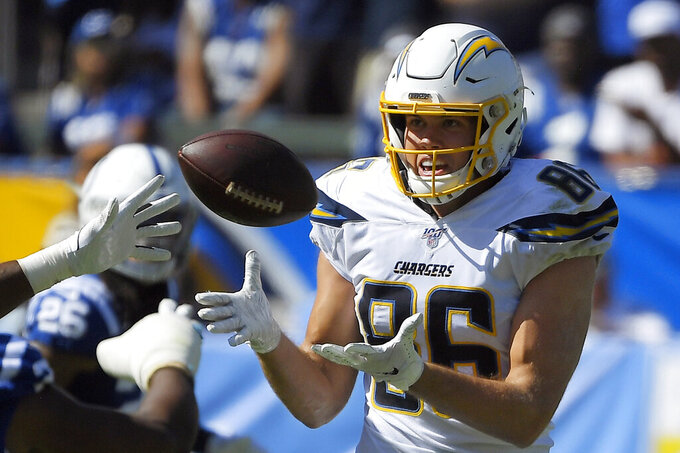 FILE- In this Sunday, Sept. 8, 2019, file photo, Los Angeles Chargers tight end Hunter Henry, right, makes a catch during the second half of an NFL football game against the Indianapolis Colts in Carson, Calif. Henry will be placed on injured reserve because of a knee injury. He fractured the upper part of his left tibia during Sunday's 30-24 overtime win over the Colts. (AP Photo/Mark J. Terrill, File)

COSTA MESA, Calif. (AP) — The Los Angeles Chargers are hoping that Hunter Henry can return for a second straight season from a knee injury.

The tight end fractured the upper part of his left tibia during Sunday's 30-24 overtime win over the Indianapolis Colts. He was injured during the fourth quarter, but returned to the game and played in overtime. He had four receptions for 60 yards, including a 17-yard catch in overtime.

"He came back in and you didn't even know he was hurt. That says a lot about his toughness," coach Anthony Lynn said. "We didn't know the severity of it until after the game."

Henry tore the anterior cruciate ligament in his right knee during offseason workouts last year but returned for the playoffs. The Chargers said on Wednesday that he will continue to be evaluated, but the timeframe for his return is undetermined.

Henry has been one of Philip Rivers' favorite targets when healthy. He led the league in touchdowns by a tight end with eight during his rookie season in 2016 and was third on Los Angeles in receptions (45) the following season.

Virgil Green will step into the starting lineup with Henry out, but he is more of a blocking tight end. Green has had only two seasons with 19 or more receptions during his nine-year career.

Sean Culkin, who is in his third year, is also expecting to see additional snaps. Matt Sokol is on the practice squad and could be moved up to the active roster.

One option not being currently explored is signing Antonio Gates. The 16-year veteran, who has played his entire career with the Chargers, was signed before the start of last season. Lynn and Rivers both said they have not reached out to Gates.

"You feel for him because he is a guy who definitely wants to be on the field," Green said. "Hopefully he will be back soon and be OK."

Henry's injury scuttles what would have been a good tight end matchup on Sunday at Detroit. Lions rookie T.J. Hockenson had six receptions for 131 yards, which is the most yards by a tight end in his debut.

Henry also wasn't the only injury news that Los Angeles had on Wednesday. Cornerback Trevor Williams was placed on injured reserve because of a quad injury he suffered during training camp. Cornerback Dontae Johnson, a six-year veteran who has played in 64 games, was signed to take Williams' roster spot.

Defensive end Isaac Rochell was placed in the concussion protocol on Monday and will likely miss Sunday's game.