Chase-down tackle, blocks just part of the job for McLaurin 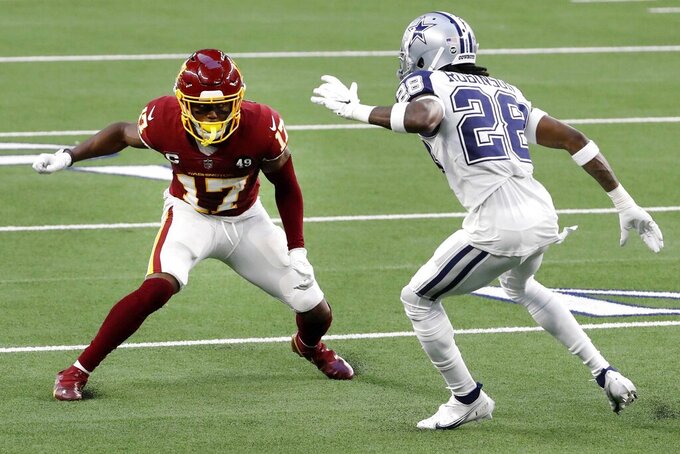 Washington Football Team wide receiver Terry McLaurin (17) runs a route as Dallas Cowboys cornerback Rashard Robinson (28) defends during the first half of an NFL football game in Arlington, Texas, Thursday, Nov. 26, 2020. When Washington takes its 4-7 record and playoff chances in the miserable NFC East to Pittsburgh to face the Steelers (11-0) and their stingy defense Monday, McLaurin, a third-round draft pick out of Ohio State, will represent the visitor's most dependable and dynamic pass-catcher. (AP Photo/Roger Steinman, File)

WASHINGTON (AP) — Sure, the ever-improving route-running, the key catches and the scores are what Washington pays Terry McLaurin for on game days — and the sorts of things that get plenty of attention around the NFL and from fans.

The second-year wide receiver is proudest, though, of a play that involved him sprinting down the field and making a chase-down tackle to prevent a touchdown after his QB was picked off.

“Well,” McLaurin said with a shrug, “that was just my job.”

When Washington takes its 4-7 record and playoff chances in the miserable NFC East to Pittsburgh to face the Steelers (11-0) and their stingy defense Monday, McLaurin, a third-round draft pick out of Ohio State, will represent the visitor’s most dependable and dynamic pass-catcher.

He leads coach Ron Rivera’s club in yards receiving (963), yards after catch (447) and first downs (43), and is in the top six in the league in each of those categories.

His 69 catches top a team without much else in the way of proven wideouts and rank 11th in the NFL.

“If he were coming out now," Rivera said, "he’s definitely a first-round pick."

That’s in part because of the way McLaurin has emphasized getting routes right and being able to handle slot and outside positioning, work he likens to a basketball player honing shooting technique.

Rivera praised the way McLaurin “thinks through his routes” and his off-field preparation, too, lauding “the way he approaches meetings, the way he takes his notes, the way he asks questions.”

Ah, but there is more to McLaurin than his receiving responsibilities, as was evident in Washington’s 41-16 victory at Dallas on Thanksgiving Day, whether in an occasional role helping create space for running backs by blocking defenders with larger frames than his 6 feet and 210 pounds or what he did on a game-altering play in the third quarter.

The score still was quite tight — 20-13 — when a pass from Alex Smith was intercepted by Jaylon Smith at the Washington 47. The Cowboys linebacker returned the ball up the sideline and seemed headed for a sure TD, likely to tie things at that moment, until McLaurin, who was about 8 yards away when the ball was grabbed, tracked him down, and brought him down, at the 4.

“Coach Rivera always asks us, it seems like almost every game or every practice: If you know your play will change the game, how hard would you play, how hard would you go, what type of effort would you give?” said McLaurin, who was announced as Washington’s nominee for the NFL’s Art Rooney Sportsmanship Award on Thursday, a month after he was chosen as a team captain.

“When I saw that the ball was intercepted by Jaylon, as soon as he took the ball, I looked at it as an opportunity to run him down. And I saw that as an opportunity to make a play for us and try to keep him as far away from scoring as possible,” McLaurin said. “I feel like that’s something that’s infectious — I hope that’s infectious, coming from a young guy, but a guy who’s seen as a leader.”

Dallas would end up getting only a field goal there.

“I can tackle pretty decent,” McLaurin said with a smile. “But I think it’s just those type of effort plays that I really enjoy, because they make a big impact on our team. ... The dirty work is still something I hang my hat on. It’s cool catching touchdowns and making big plays, but running down guys and making big plays for our running backs is also even more fun.”