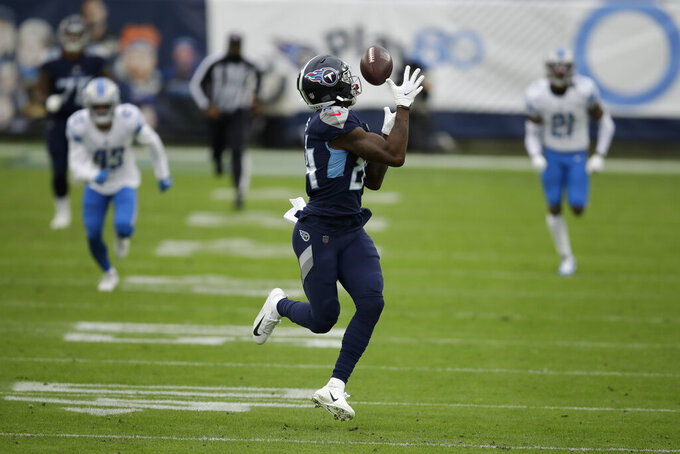 NASHVILLE, Tenn. (AP) — The Tennessee Titans insist they aren't satisfied with much bigger goals than simply winning 10 games for the first time in 12 seasons.

They keep this up, returning to the AFC championship game could be only a stop on the way.

The Titans (10-4) are on an offensive run enjoyed by only four other teams in NFL history with five straight games with at least 420 yards and at least 30 points. They have to score a lot because the Tennessee defense is really good at coming up with turnovers, and that's about it.

Quarterback Ryan Tannehill said the Titans understand this is when the good teams keep improving and separate themselves by staying focused on work. That's why the Titans are nitpicking the drives that didn't result in points in a 46-25 rout of Detroit.

“We’re going to try to find a way to win each drive, to finish in the end zone, and if it takes 30-plus points to win a game, that’s our mindset,” Tannehill said.

The Titans face their biggest challenge Sunday night to winning the AFC South for the first time since 2008. They visit the Green Bay Packers (11-3), currently the top seed in the NFC. Tennessee is tied with Indianapolis (10-4) but hold the divisional tiebreaker over the Colts.

“Hopefully we don’t spend a whole lot of time talking about 10 wins,” Titans coach Mike Vrabel said. “That’s not what anybody is here for.”

The offense clearly. The Titans are tied with Kansas City averaging a league-best 31.1 points a game, scoring at least 30 points nine times and topping 42 in four games, including a season-high 46 against Detroit. The Titans also rank second only to the Chiefs with 399.4 yards total offense a game.

“We come out to score on every drive, every time we get the ball,” receiver A.J. Brown said. “We just got to put it all together."

Derrick Henry remains the NFL's rushing leader with 1,679 yards. Tannehill has thrown for 3,482 yards, and Corey Davis has a career-high 945 yards closing in on his first 1,000-yard receiving season. Brown isn't far behind for his second straight with 881 yards, and he's also tied for fifth with 10 TD catches.

The defense. Still. Tennessee remains last in the NFL with only 14 sacks, and on third-down defense. The Titans allowed Detroit to convert 7 of 12 third downs (58%), and they gave up 430 yards. Luckily, they did force three turnovers, and safety Kevin Byard got his first interception of the season.

Tannehill. The quarterback just had his fifth straight game with a passer rating over 100, the longest active streak in the NFL and a franchise record. He also joined Michael Vick (Nov. 15, 2010) and Jack Kemp (Dec. 4, 1960) as the only players in NFL history with at least three TD passes, two rushing TDs and a 145.8 or better passer rating in a game.

Punter Brett Kern. Yes, the man who's been the Titans' MVP much of his career didn't put his best foot forward after Tennessee gave up a safety in the second quarter. His punt traveled only 48 yards.

Vrabel has been nursing his team through a variety of issues all season. But his beleaguered defense got cornerback Adoree Jackson back against Detroit for his season debut following an injured knee, and rookie cornerback Kristian Fulton also is working his way back from an injury. Rookie Darrynton Evans returned against Detroit, his first appearance since Oct. 13.

12 — The Titans once again lead the NFL in turnover margin at plus-12, tied with Indianapolis.

A trek to Lambeau Field for a prime-time game Sunday night with the Packers. It's one of only two games this week between teams each with double-digit wins. The other? The Colts visit Pittsburgh earlier Sunday.

Then it's the regular season finale, with the Titans visiting Houston and the Colts hosting the woeful Jaguars.