Check downs? More like checkmate as Chiefs take what's given 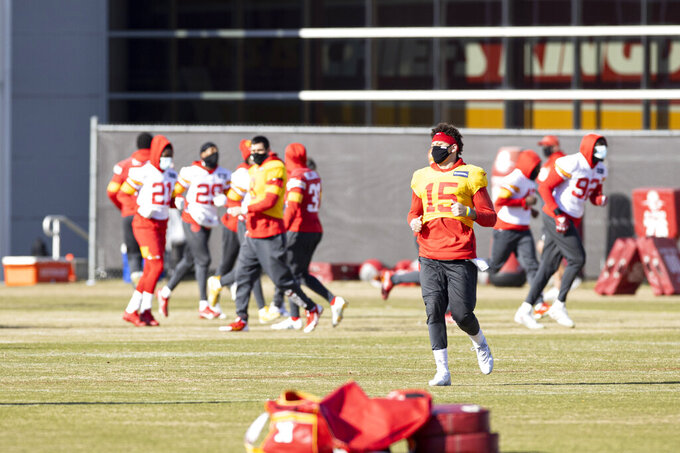 They wouldn't be entirely wrong.

They wouldn't be entirely right, either.

One of the biggest differences in the Chiefs from the past two years, when Patrick Mahomes was asserting himself as the best quarterback of his generation, and this season, when he has a chance in the Super Bowl to beat the Buccaneers' Tom Brady — the best of any generation — is the way Mahomes has eschewed high-risk throws for high-percentage ones.

He'll pass on double-coverage on Tyreek Hill streaking downfield for an open running back ambling into the flat. Or the tight window to tight end Travis Kelce in the middle of the field for the wide-open wide receiver on the edge.

Some might call all those dink-and-dunk throws “check downs.”

Given the Chiefs are playing for a second straight Super Bowl tile Sunday? They probably prefer “checkmate.”

“It's a fine line,” explained Mahomes, who led all quarterbacks this season in producing yards after his receivers caught the ball. “You want to believe you can make every single play, but you don't want a play that turns bad because you're trying to do too much. That's something I've tried to do my entire career, take it to the very limit but never go past it.”

It's been a work in progress, too.

Mahomes had the lowest check-down rate in the NFL in 2018, his first year as a starter, which led to some record-setting passing numbers but also a career-high 12 interceptions. But as his check-down rate increased ever-so-slightly the past two seasons, those other numbers also balanced out.

Mahomes still threw for 4,740 yards with 38 touchdowns in just 15 regular-season games this season, but his percentage of what the Chiefs consider “poor throws” dropped from 18.3 to 17.6.

Sure, those deep throws still generate the highlights. But the reality is the average intended air yardage for Mahomes fell from 9.1 as a rookie to 8.8 last season to 8.4 this season, when his passer rating increased by more than five points.

“That's what makes him so special,” Chiefs quarterbacks coach Mike Kafka said. “Sometimes those guys on defense do a good job, too. I think Pat's gotten better at understanding where his answers are.”

It helps that he might have the most potent collection of pass-catchers with the ball in their hands in the league.

Kelce shattered just about every NFL record for a tight end this season, including yardage with 1,229, but his average target depth was just 9.0 yards — barely within the top 100 players that caught a pass. Hill had 1,276 yards receiving in the regular season but had a target depth of 12.9, which ranked 34th overall.

In fact, no Chiefs were among the NFL's top 25 pass-catchers in average depth of target.

“That starts with Pat getting the ball out of his hand and allowing us to get upfield and make those moves,” Chiefs wide receiver Sammy Watkins said.

“If you watch the season, Travis is the No. 1 guy in the league catching the ball and splitting guys and running 30 or 40 yards, because we don't have those deep shots. We've been doing a great job of catching the ball, running upfield and making those plays. That's the next step this team has taken.”

Not that the Chiefs ever gave up on taking deep shots, and the Buccaneers are painfully aware of what can happen when you let your guard down. Hill dominated them for 203 yards receiving in the first quarter alone in Week 12, and he finished with 13 catches for 269 yards and touchdown receptions of 75, 44 and 20 yards in a 27-24 victory.

It's just that most defenses have steadfastly refused to allow Kansas City to complete them.

That's a big reason Mahomes was among the least-blitzed quarterbacks in the league this season. Defensive coordinators would rather drop an extra player (or two) into coverage, allow their cornerbacks and safeties some extra cushion on those speedy wide receivers, and give up a short completion and play the next down than give up six points all at once.

The problem is Mahomes has become just as dangerous throwing his jab as his haymaker.

“They play fast but they understand football. They're not just a track team out there,” Buccaneers defensive coordinator Todd Bowles said. “They can beat you vertically and horizontally. They keep you off-balance. They understand what they need to do to win. I don't worry about the opposition. They do what they do and do it better than anybody else.”