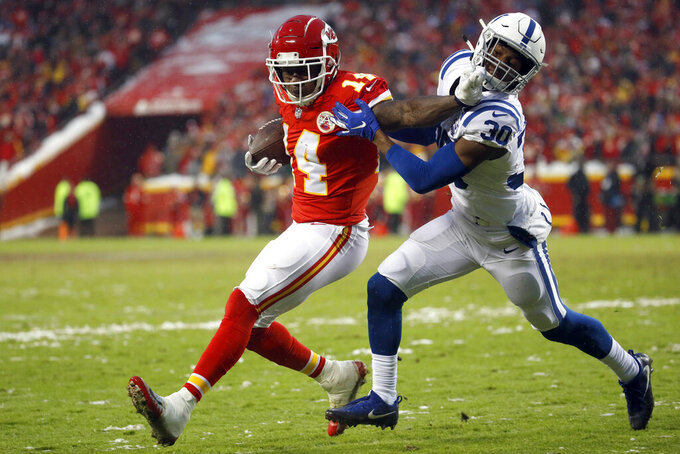 KANSAS CITY, Mo. (AP) — Andy Reid typically begins his postgame news conferences with a rundown of injuries, ranging from the run-of-the-mill bumps and bruises to the more serious stuff that keeps players out awhile.

After Kansas City routed the Indianapolis Colts last weekend to reach its first AFC title game in 25 years, Reid stepped to the podium and said, well, not much of anything.

"We really didn't get anyone injured," he admitted. "Everyone, knock on wood, came out OK."

In truth, the only teams healthier than the Chiefs at this juncture of the season have been done playing for weeks. Even guys that have been out of the lineup for a while, such as wide receiver Sammy Watkins, are back to full speed ahead of Sunday's game against New England.

The Chiefs are so well off right now that they just activated another starter, offensive lineman Laurent Duvernay-Tardif, off injured reserve on Tuesday. He'd been out since Week 5 with a broken leg and has been practicing since Dec. 26, and now could be available against the Patriots.

Whether he starts remains to be seen; Andrew Wylie has played quite well in his place.

Regardless, the simple fact that the Chiefs' best run blocker will be back on the sideline provides additional depth up front, and gives their high-powered offense even more confidence.

Watkins missed about six weeks with a foot injury, and the Chiefs' offense seemed to be a beat off without their No. 2 wide receiver.

But he finally returned against the Colts and caught six passes for 62 yards while drawing some of the attention off Tyreek Hill and Travis Kelce, who both had monster games against what had been a stingy Indianapolis defense down the stretch.

"I'm just thankful for the organization, the trainers, my coaches, for the six weeks getting me prepared to play this game and all week just getting me mentally prepared," said Watkins, who signed a $36 million, three-year contract in the offseason to provide just what he did Saturday.

"Just being on the field was great," he said, "giving those guys energy."

Reid said that Watkins appeared to come out of the game in good shape, and that he wasn't worried about the speedster aggravating his foot injury before their showdown with the Patriots.

"I think he's doing OK. He felt good after the game. He felt pretty good yesterday," Reid said. "He is sore just from playing, but the foot feels good."

If only the same could be said of Eric Berry's foot.

The one injury issue that has lingered for the Chiefs all season, and right into the playoffs, has been the painful heel of their star safety. Berry tore his Achilles' tendon and missed nearly all of last season, and the heel began to cause him problems again in training camp. He tried to play late in the season, but was shut down again ahead of Week 17 and did not play against the Colts.

The Chiefs' emotional leader, not to mention a three-time All-Pro, Berry remains one of the biggest wildcards for Kansas City as it prepares to host the AFC title game for the first time.

"We have had great communication through the process and most important that when he can play, he can protect himself and play at the level he wants to play at," Reid said.

"He didn't feel like he was at that level (Saturday), which he has been great with communicating. If he can go, he can go. If he can't, he can't. I'm proud of the guys that stepped in and played and played at such a high level."

The Chiefs signed Parker in part to fill Berry's spot, and he had started most of the season with mixed results. He was finally benched with two games left in favor of Jordan Lucas, who has flourished in his newfound starting role to the point that Parker became expendable.

Whether his release is another sign that Berry could play Sunday is an intriguing question.

Reid remained noncommittal on Monday and the Chiefs were off Tuesday, so the first chance for Berry to test out his bum heel will come during Wednesday afternoon's practice.

The first injury report of the week will also come out Wednesday.

Berry's name notwithstanding, it ought to be a pretty clean one for the Kansas City Chiefs.