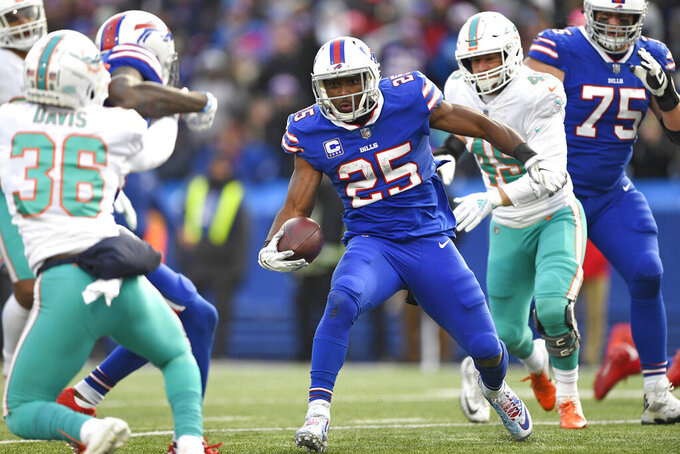 FILE - In this Dec. 30, 2018, file photo, then-Buffalo Bills running back LeSean McCoy (25) rushes for a 9-yard touchdown during the second half of an NFL football game against the Miami Dolphins in Orchard Park, N.Y. The Kansas City Chiefs announced the signing of two-time All-Pro running back LeSean McCoy on Monday, Sept. 2, 2019, two days after he was released by Buffalo. (AP Photo/Adrian Kraus, File)

KANSAS CITY, Mo. (AP) — The Kansas City Chiefs are under no preconceptions that the LeSean McCoy they officially signed Monday is the same running back that was a two-time All-Pro with the Philadelphia Eagles.

They don't need him to be, either.

The Chiefs have a clear-cut starter in Damien Williams and two young, capable backups in second-year pro Darrel Williams and rookie Darwin Thompson. So whatever McCoy can provide after his release by Buffalo is gravy, whether that is on-field production or locker-room leadership.

"There were a lot of teams that called in and I thought this was the best fit," McCoy said. "You see this offense, I'm just trying to fit in a small part. These guys are rolling."

Chiefs coach Andy Reid was responsible for drafting McCoy in Philadelphia, and the six-time Pro Bowl pick wound up playing his first four seasons for him. McCoy played two more with the Eagles after Reid was fired and landed in Kansas City, then spent the past four seasons in Buffalo.

But he was released over the weekend in a surprise move, and several teams immediately expressed interest, including the AFC West rival Los Angeles Chargers. But the relationship McCoy had with Reid and Chiefs general manager Brett Veach — and McCoy's agent, Drew Rosenhaus — made for a relatively quick negotiation, and McCoy was in the Chiefs' practice facility to sign his contract Monday.

Now, the trick will be to get up to speed in time to offer some help Sunday in Jacksonville.

"We'll see what he can pick up in a short period of time, how comfortable he is with it," Reid said. "He's a pretty sharp kid. He's been practicing and playing, so conditioning is not an issue."

McCoy should have some familiarity with the offense from his days with Reid in Philadelphia, but the coach acknowledged some elements have changed dramatically the past few years. The Chiefs run more run-pass options, play at a quicker pace and cater to MVP quarterback Patrick Mahomes.

"I've been in the playbook all day," McCoy said. "Some of the terminology is different but a lot of the concepts are the same. Coach has a lot more wrinkles than before."

Reid said he wouldn't put McCoy "out there in a bad situation without knowing the plays," so his package may be limited Sunday. Besides, Reid said, "we have other guys who can play, too."

That is where McCoy might just be the most valuable.

The Chiefs signed Carlos Hyde in the offseason with the hope he could provide a veteran presence in the backfield. But he was unproductive in the preseason and was traded to Houston, leaving a major experience void among the four running backs the Chiefs kept on the roster.

Damien Williams has the most, but that is still just 74 games over parts of five seasons and a total of 733 yards rushing. Darrel Williams has appeared in six games. Thompson and second-year pro Tremon Smith have never appeared in a game at running back — Smith is a converted cornerback.

In other words, McCoy alone has played in 67 more games than the rest of the Chiefs' running back group. Eight times McCoy has run for more yards in a single season than the other four running backs have in their entire careers combined. He's reached the end zone 69 times on the ground, 10 times the number of touchdowns that the rest of the Chiefs' backfield has scored.

"I think that's a great fit for him," Bills general manager Brandon Beane said. "He is going in to a team that they've got a lot of high expectations and I'm sure he will be a great addition to what they're doing. We truly wish him the best, unless we play him."

Reid is cognizant of the stress it could bring to a tight locker room to add a running back just before the season that wasn't around for training camp. But he was heartened by the way the rest the Chiefs embraced McCoy, and he made sure to discuss the signing with Damien Williams specifically.

"It's a great situation to be in, and really for both of them and the team," Reid said. "They don't know each other, but they'll get to know each other, and I know they'll work well together."

For good reason. While the Bills are still in the midst of a vast rebuild, the Chiefs have won three straight AFC West titles, and many have pegged them as Super Bowl favorites this season.

"You got to put the work in. Nothing is given in this league. You have to earn it," McCoy said. "But just look at the players, the success they had, the focus, and something about just being here, the players are all just good friends. Sometimes you have superstars — 'This guy has a routine and off to the side' — but here they're all on the same page. It's special."

Notes: The Chiefs' roster stood at 52 players, so adding McCoy did not require any additional moves. ... McCoy will wear his familiar No. 25 and Thompson will switch to No. 34. ... Backup TE Deon Yelder (ankle) is healthy for Week 1 after missing most of the preseason, Reid said.