Chiefs defense searching for answers after loss to Ravens 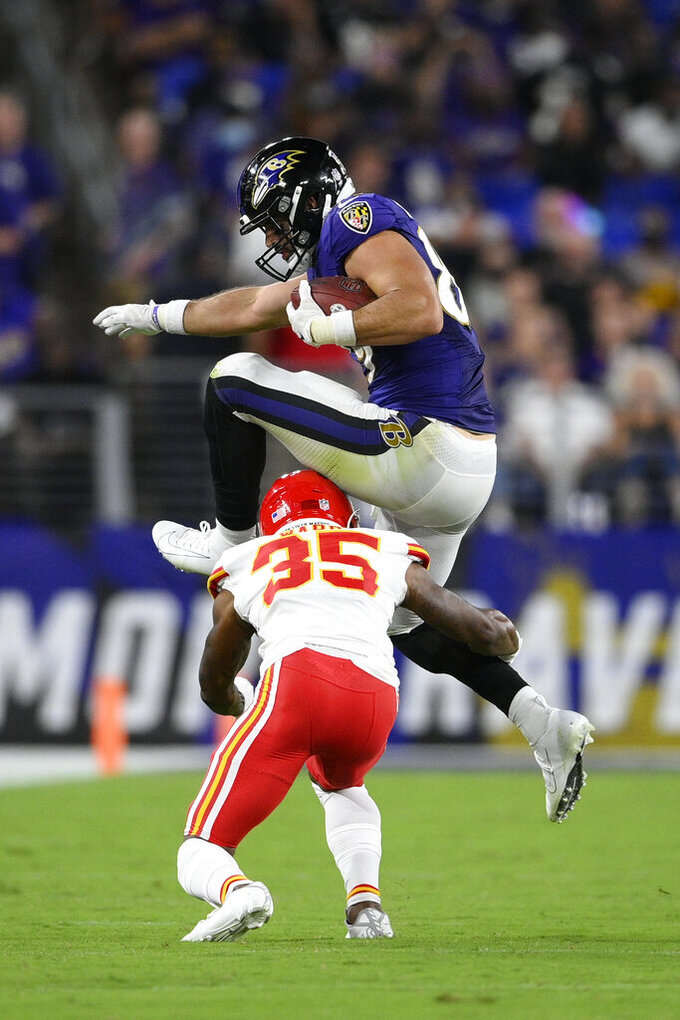 He needs to find some sort of pass rush, which has been unable to generate pressure on the Browns' Baker Mayfield in Week 1 and the Ravens' Lamar Jackson on Sunday night. He needs to find a way to plug the run, especially after the Ravens gutted the Chiefs despite missing enough running backs to injury to fill out a flag football team.

Oh, and the biggest challenge? Fundamentals such as tackling when teams are largely barred from hitting in practice.

“Listen,” Chiefs coach Andy Reid said before Wednesday's practice, “this is a game of blocking and tackling and if you don't practice it enough you're going to have some misses. I'm not complaining. It's just what it is.”

Put all those issues together and the Chiefs are giving up nearly 33 points per game, better only than the Titans, Ravens, Lions and Falcons, and putting extreme pressure on their dynamic offense to produce even more than usual.

There isn't much time to find a solution, either. The Chiefs have the Chargers visiting Arrowhead Stadium on Sunday, and the loser between two division favorites will have a 1-2 record and suddenly find itself in the AFC West cellar.

“We're not where we want to be yet. Still fairly new, all of us playing together,” said Chiefs defensive tackle Jarran Reed, who was signed away from Seattle in free agency for the express purpose of plugging up running lanes.

“We have a long way to go,” Reed said. “I'm pretty sure we'll get here. We're not going to hang our heads down. We're going to keep getting better every day — stopping the run, pressuring the quarterback and getting sacks.”

It would be easier if there was only one issue to fix. But like Reed said, the Chiefs have been poor across the board.

They also have missed 14 tackles through the first two games. Safety Daniel Sorensen has nine of them, giving him the league lead by three and raising questions about why Juan Thornhill has not played more in his place.

“They do certain things the same and a couple of things different,” Reid said. ”Dan really had the better camp and so on. Maybe a little bit more consistency there, but we love Juan and where he’s getting himself back to where he was his rookie year. I don’t want to take anything away from the effort that he’s put forward to do that. They all get a chance to play."

What the Chiefs need is for all of them to play better.

“This is assignment football. It doesn't matter what defense you play on,” said Chiefs safety Tyrann Mathieu, who picked off two passes and scored a touchdown against the Ravens, but who also was whistled for a couple of penalties.

“It all comes down to assignments,” Mathieu said, “and then from there it's execution. Any time you miss a line or blow an assignment against a good team, they're going to make you pay for it.”

NOTES: RB Clyde Edwards-Helaire, whose fumble cost the Chiefs a chance to beat Baltimore in the closing minutes, was slowed in practice Wednesday by an illness. It was not COVID-19. ... TE Blake Bell (ankle), DE Chris Jones (wrist) and DT Derrick Nnadi (hip) also were limited in practice. ... LB Anthony Hitchens had “minor surgery” on Monday to remove “fatty tissue,” Reid said, but the procedure is not expected to keep him out of Sunday's game against the Chargers.