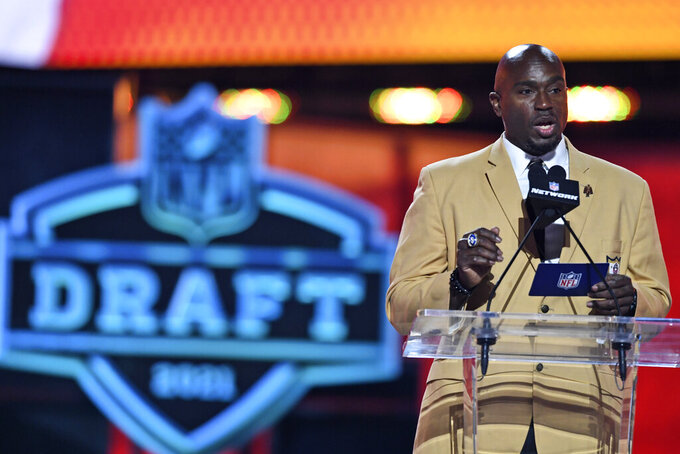 KANSAS CITY, Mo. (AP) — Chiefs coach Andy Reid has a soft spot for the University of Missouri and for big, burly offensive linemen.

In that respect, the second day of the NFL draft worked out quite nicely for him.

It also worked out quite well for the Chiefs, who filled their two biggest needs with their first two selections. Missouri linebacker Nick Bolton was the first, the local boy going No. 58 overall Friday night, and Oklahoma center Creed Humphrey was the second, going five selections later as the Chiefs continued rebuilding their offensive line.

“We knew there was a good group of offensive linemen and so you figure there would be a lineman there, potentially, and then you hope it's one you like,” said Reid, a longtime offensive line coach who spent three seasons teaching the position at Missouri in the late 1980s and early '90s.

“Then the linebacker spot was a bit thin,” he continued, “but again, the way it fell, this kid, I thought it was a no-brainer when we got to that spot. You put on the film you and you watch him play and he just jumps out at you.”

The Chiefs did not have a first-round pick Thursday after dealing it to Baltimore in a package that landed them two-time Pro Bowl offensive lineman Orlando Brown. That made for a long wait through the opening night of the draft before the Chiefs were finally on the clock midway through the second round.

They didn't wait long before submitting Bolton as their initial pick.

Many draft pundits had projected the Butkus Award finalist to be a late-first round pick, but he somehow slipped to a team that needed a linebacker. Bolton is expected to fill the middle linebacker position that opened when Damien Wilson signed a two-year, $5.75 million contract with the Jaguars.

“I had no clue,” Bolton said, when asked whether he thought Kansas City would be his destination. “I didn't know until a couple of minutes prior to the pick. I talked to the coaches, knew they kind of liked me. Being at Missouri, being close, they saw me a lot. I knew they liked me. But I didn't know until I took the call that they were going to pick me.”

Humphrey continues a complete rebuild of the Chiefs offensive line after it was decimated by opt outs and injuries last season, then ran roughshod over by the Buccaneers defense in a blowout Super Bowl defeat.

The Chiefs added Brown to play left tackle, signed veterans Joe Thuney and Austin Blythe to play guard and center, and lured former All-Pro offensive lineman Kyle Long out of retirement. They also plan to get back Laurent Duveray-Tardif, a starter who opted out last season, and Lucas Niang, a third-round pick a year ago who also opted out.

The letdown in the Super Bowl clearly convinced Reid and general manager Brett Veach that they needed to add more — and better — depth in front of quarterback Patrick Mahomes next season. Humphrey will compete for a starting job right away without the pressure of being forced into the lineup from Day 1.

“You know how (offensive line coach) Andy Heck does it with playing the five best,” Reid said. “He's going to give everyone an opportunity to show what they've got and we'll figure it out. But that competition, I can't say it enough: You bring that competition into the picture, it just makes everybody better, and in this case the offensive line better.”

Brown and Humphrey briefly overlapped at Oklahoma. In fact, Brown spent some time stumping for his former teammate with Veach and Reid when he was in Kansas City to go through his physical and sign paperwork.

“He's a guy that's going to go in there an do the work necessary to get to the next level. When I got to Oklahoma, that's something I admired,” Humphrey said. “Just seeing him do that, the mentality he has — he's such a mean player on the field, too. That's something I've always admired and something I've tried to copy my game after.”

Earlier in the day, the Chiefs signed running back Jerick McKinnon to provide depth behind Clyde Edwards-Helaire.

The versatile McKinnon missed the 2018 and '19 seasons due to injuries but returned last season to appear in 16 games for the 49ers, running for 319 yards and five touchdowns while adding another score through the air.

UP NEXT: The Chiefs did not have a third-round selection, so they will conclude the draft with four picks on Saturday. The first comes in the fourth round at No. 144 overall, followed by two in the fifth round and another in the sixth.