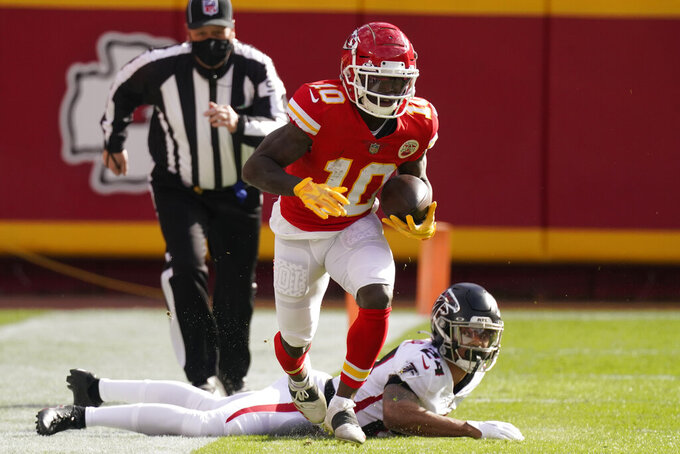 KANSAS CITY, Mo. (AP) — It took five decades for the Kansas City Chiefs to win a second Super Bowl. Now they have the audacity to shoot for two in two years.

Yet while Patrick Mahomes and Co. are the favorites at just about every sports book, bar or barbershop heading into the playoffs, the road to a repeat is hardly a smooth one. Nobody has won back-to-back championships since the New England Patriots successfully defended theirs in February 2005, the longest stretch without a repeat winner in Super Bowl history.

“It's just historically an enormous challenge for teams to come back,” said Seahawks coach Pete Carroll, who led Seattle to the 2013 NFL title but lost to the Patriots the following year. “It's almost easier to get there and win it than it is to come back and do it a second time around. And it's because of the shift that takes place once you win, and all that goes on through those months of the offseason, and the buildup and then the anticipation going through the start.”

That's certainly one reason why repeating is so difficult. There are dozens of others.

The schedule of defending champions is often more difficult, and you are bound to get your opponent's best shot any given week. Injuries and luck inevitably play a factor. The salary cap, the NFL draft and free agency are designed to create parity, giving more teams an opportunity to make the playoffs.

The result? Over the last 20 years, seven defending champions failed to make the postseason at all. Three more were knocked out of the playoffs in the wild-card round and five more in the divisional round, which means just a quarter of Super Bowl winners were able to reach the conference championship game.

During one stretch from 2006-13, every champion either missed the playoffs or lost its first game.

“I mean, you have to be able to take it up another notch without getting so tied into it that you completely can't function,” Chiefs coach Andy Reid said. “Sometimes you can just try to so hard that everything goes the opposite way. You have to work within it and rise up to those challenges, and try to maximize what you think you're capable of.”

Reid is speaking from experience, even though last year's championship was his first as a head coach. He was on Mike Holmgren's staff in Green Bay when the Packers beat the Patriots to win the Super Bowl on Jan. 26, 1997. And while they managed to return the following year, they were beaten by the Denver Broncos — who would repeat themselves.

That was the last repeat champion until the Patriots in the 2004 and ‘05 Super Bowls, and together they are two of just eight instances in which teams have won back-to-back championships. The Packers, Dolphins, 49ers, Cowboys and Steelers also have pulled off the feat, with Pittsburgh doing it twice in a six-year span under Chuck Noll in the 1970s and ’80s.

Then again, those teams' achievements also give the Chiefs confidence that they can do it again.

“The part I like about this team,” Reid said, “which is important now, is they stay humble with it. It's not something they counted on, or beat their chest on that they were Super Bowl champs. They're staying humble going into this. They know it's a tough road getting to where we want to go, and now the playoffs, you are going to get your best shot anyways. You have to get yourself mentally prepared for three games, and one in particular, because it's single elimination.”

The Chiefs, whose 14-2 record is the best by a defending champion since the 2011 Packers, earned a big advantage by getting the No. 1 seed and lone first-round conference bye. And they did it in Week 16, allowing them to rest their starters last week and everybody this week in anticipation of their divisional-round game at Arrowhead Stadium.

“It's huge having two weeks. You can mentally take off that first week, which is huge,” Mahomes said. “I think physically we will be fine. I think having that mental break will rejuvenate everybody and have us ready.”

It might take some of the pressure off the quest for a repeat, too.

“There’s so much that goes into handling that,” Carroll said, "that I think the fact that KC is doing what they’re doing is an amazing statement for their team, for their coaching staff. Andy does a marvelous job, and to be where they are — you know, we had our chance at it a couple of years back and you saw us bounce right back. It was challenging, but we made it back to that game and made it all the way to the final, and I think that’s the big accomplishment.

“I know winning the Super Bowl is a big deal and all that. But winning two is really cool.”