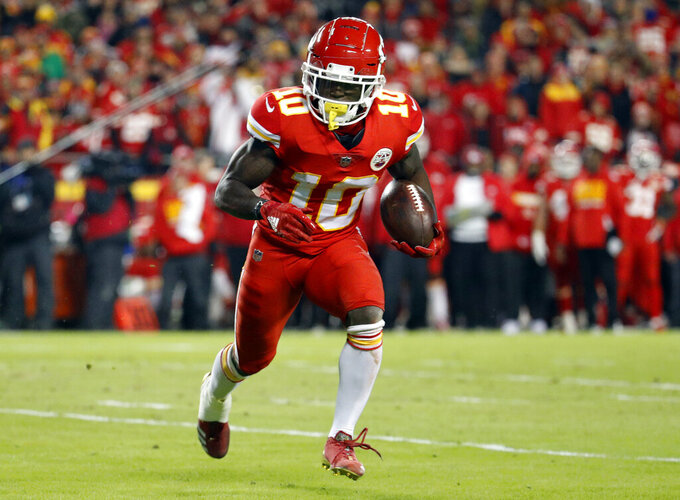 FILE - In this Dec. 13, 2018, file photo, Kansas City Chiefs wide receiver Tyreek Hill (10) runs with the ball during the first half of the team's NFL football game against the Los Angeles Chargers in Kansas City, Mo. The Chiefs are investigating an incident in which Hill was involved in a domestic battery episode in suburban Kansas City earlier this week. The team said in a statement to The Associated Press that it was aware of a police report filed Thursday, March 14, by the Overland Park Police Department that lists Hill’s address and identifies a juvenile as the victim. Hill’s fiancee, Crystal Espinal, is identified among “others involved.” (AP Photo/Charlie Riedel, File)

OVERLAND PARK, Kan. (AP) — The Chiefs are investigating an incident in which star receiver Tyreek Hill was involved in a domestic battery episode in suburban Kansas City earlier this week.

The team said in a statement to The Associated Press that it was aware of a police report filed Thursday by the Overland Park Police Department that lists Hill's address and identifies a juvenile as the victim. Hill's fiancee, Crystal Espinal, is identified among "others involved."

The couple has a 3-year-old son, Zev.

Overland Park police Officer John Lacy said the case has been turned over to prosecutors for review. No charges have been filed against Hill, and Johnson County prosecutor's spokeswoman Kristi Bergeron didn't immediately return a phone message seeking comment.

Chiefs spokesman Ted Crews said Friday the team has been in contact with local authorities and the NFL as it gathers more information but declined further comment.

The 25-year-old Hill has a history of domestic violence.

While starring at Oklahoma State in 2014, Hill allegedly punched and choked Espinal when she was pregnant with their son. He was kicked off the team and pleaded guilty to domestic assault and battery by strangulation, and received three years of probation in the case.

Hill transferred to West Alabama and was chosen by the Chiefs in the fifth round of the 2016 draft, a selection widely criticized given his history. The Chiefs said at the time they had vetted Hill and were comfortable with their decision, and they put safeguards that included counseling and other checks they hoped would keep Hill on the right path.

"Tyreek has done a nice job staying on top of himself with that," Chiefs coach Andy Reid said late last month. "Do we communicate with him? Yes. We have things set up for him if there are issues, but he's been phenomenal. Every team has that, but it gives you confidence in human beings that they can make a change when they put their mind to it and do things the right way."

It appeared to be working, too. Hill won over a skeptical fan base with his game-breaking ability and the way he interacted with them, often signing autographs for hours during training camp.

The two-time All-Pro had also positioned himself for a massive payday.

He had 87 catches for 1,479 yards and 12 touchdowns last season, helping quarterback Patrick Mahomes win league MVP honors and the Chiefs win a third consecutive AFC West title. They advanced to the conference title game before losing in overtime the Super Bowl-champion Patriots.

Hill is entering the final year of his rookie contract, and the Chiefs had been building their roster to create enough salary cap flexibility to sign him to a long-term deal. The largest contract given to a wide receiver is the $90 million, five-year deal that the Giants gave Odell Beckham Jr., who has since been traded to the Cleveland Browns.