Chiefs hold on for wild 30-29 victory over rival Raiders 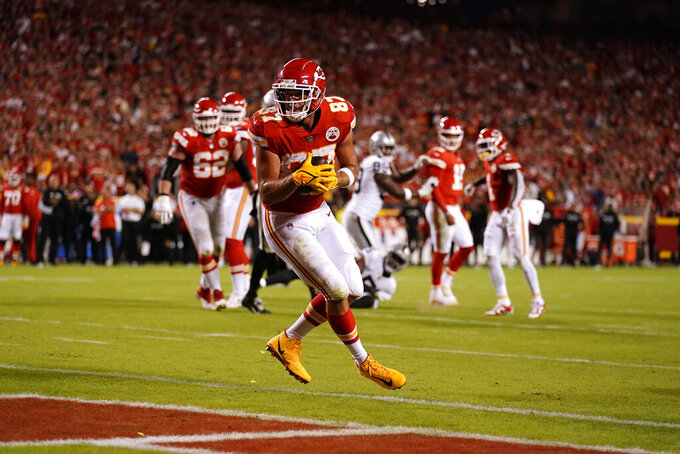 KANSAS CITY, Mo. (AP) — The Kansas City Chiefs headed off to the locker room facing a big hole against the Las Vegas Raiders on Monday night, everything from the big plays to the officiating calls going the way of their longtime AFC West rivals.

One call in particular lit a fire under them.

It was a dubious penalty on Chiefs defensive tackle Chris Jones for roughing Raiders quarterback Derek Carr, and nobody in the Kansas City locker room could believe it. But rather than stew over it, or lament their 10-point deficit, Patrick Mahomes and the rest of the Chiefs used it as motivation to storm from behind for the 30-29 victory.

“There was anger just about how we had played up to that point,” said Mahomes, who threw four touchdown passes to tight end Travis Kelce. “We needed everybody to go out there and take the fight to them.”

The Raiders still had a chance when Davante Adams, who earlier had hauled in a 58-yard touchdown catch, added a 48-yarder with 4:29 to go. It came after Kelce's final touchdown catch, when Kansas City failed on a 2-point try that left the score 30-23. But rather than kick a tying extra point, Raiders coach Josh McDaniels also went for 2.

Josh Jacobs, who had shredded the Chiefs defense all night, was stuffed at the goal line.

The Raiders got the ball back one last time with 2:29 left, and a long third-down pass to Adams down the Kansas City sideline appeared to get them in field-goal range. But the play was reviewed and Adams failed to get both feet in bounds, and Carr threw incomplete on fourth-and-1 with 47 seconds left before the Chiefs ran out the clock.

“We didn't fall apart on each other,” Chiefs safety Justin Reid said. “We battled through adversity.”

Carr finished with 241 yards passing, and Jacobs ran for 133 yards and a score, as the Raiders lost to the Chiefs (4-1) for the fourth straight time. Daniel Carlson was 3 for 3 on field goals, extending his streak to 38 in a row.

What he wouldn't have given for a chance at No. 39.

“We had a chance,” Daniels said. “We just didn't make one or two plays there at the end to finish it.”

The game of twists and turns began with the Raiders failing to score on their opening drive for the first time all season.

They made up for it on the next one.

Facing fourth-and-inches in their own territory, McDaniels sent his offense back on the field. But rather than run Jacobs up the middle, or sneak with Carr, he aired it out to Adams, who ran past Rashad Fenton for the 58-yard TD catch.

Adams and the Raiders continued to pick on Fenton later in the half, when a pass interference moved Las Vegas deep into Chiefs territory. Adams drew another penalty on Jaylen Watson in the end zone, setting up Jacobs' short TD plunge.

It was 17-0 when Kelce finally reached the end zone for the Chiefs, but it appeared as if the momentum had turned when Jones stripped Carr from behind and landed him. But despite the ball clearly coming out, and the Pro Bowl defensive tackle coming away with it, referee Carl Cheffers threw a penalty flag and called Jones for roughing the passer.

Chiefs coach Andy Reid stormed off the sideline to argue. And after the teams traded field goals in the final minutes, leaving the Raiders ahead 20-10, Reid cornered Cheffers and lit into him again as the teams headed to the locker room.

The questionable penalty came one day after another questionable roughing call by referee Jerome Boger on Atlanta's Grady Jarrett against Tampa Bay quarterback Tom Brady sealed the Buccaneers' win over the Falcons.

Cheffers told a pool reporter that Carr “gets full protection of all aspects of what we give the quarterback in a passing posture. So when he was tackled, my ruling was the defender landed on him with full body weight.”

Mahomes said: “It wasn't the greatest call in the world. You have to find a way to bounce back and we did.”

The Chiefs opened the second half with a 75-yard march that Kelce capped with his second TD reception. And after they forced a quick punt, the Chiefs went 57 yards and watched Kelce haul in his third to give Kansas City a 24-20 lead.

Midway through the fourth quarter, it was the Chiefs who got a penalty gift.

They were leading 24-23 when fill-in kicker Matthew Wright, whose 59-yarder before halftime set the franchise record for longest field goal, yanked a 37-yarder left. But defensive end Malcolm Koonce was called for holding, giving Kansas City an automatic first down, and Mahomes found Kelce once again four plays later to extend the lead to 30-24.

The teams traded touchdowns — and missed conversions — down the stretch as the Chiefs escaped with the win.

“We're close but close doesn't count in this game,” Carr said. “It's frustrating.”

Raiders: TE Darren Waller left with a hamstring injury in the first half. TE Foster Moreau (knee) already was unavailable despite returning to practice Saturday.

The Raiders get next week off before facing the Texans on Oct. 23 in Las Vegas.

The Chiefs host the Bills on Sunday in a rematch of January's playoff overtime thriller.