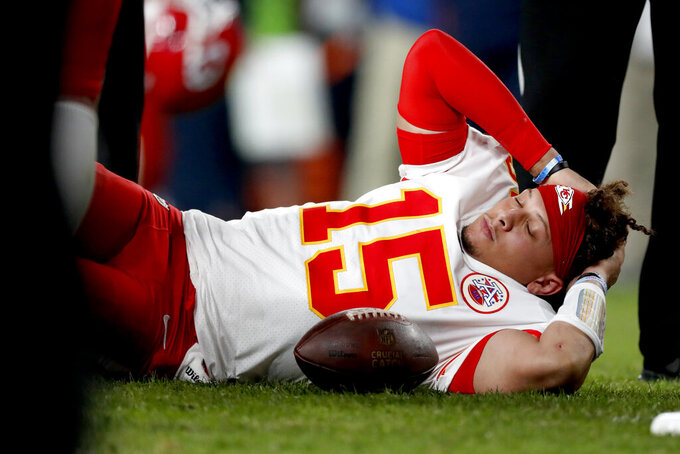 Kansas City Chiefs quarterback Patrick Mahomes (15) lies on the field after being injured against the Denver Broncos during the first half of an NFL football game, Thursday, Oct. 17, 2019, in Denver. (AP Photo/David Zalubowski)

KANSAS CITY, Mo. (AP) — Patrick Mahomes was back in the Kansas City Chiefs' practice facility Monday, going through some extensive pool therapy and other rehabilitation exercises on his injured right knee.

That alone was a good sign for the reigning league MVP.

Mahomes dislocated the patella in the knee while sneaking for a first down in last week's win in Denver. But what initially looked to be a rather serious injury is appearing less severe by the day, particularly after an X-ray taken at the stadium and an MRI taken Friday came back negative.

"That turned out as good as we could possibly imagine," Chiefs trainer Rick Burkholder said as the team returned from a few days off. "He's worked out here all weekend and is progressing nicely."

Burkholder and coach Andy Reid declined to put a timetable on his return. The Chiefs play the Packers on Sunday night, then have three more games before their bye week.

In the meantime, Reid said, backup quarterback Matt Moore is preparing to start against Green Bay, with rookie Kyle Shurmur likely to be elevated from the practice squad to serve as the backup.

"We'll see how it all goes," Reid said, "but we have a lot of confidence in Matt, having known him for a short period of time really but also knowing what he's done when he's had the opportunities to play. He'll get himself ready to go, which he does every week."

Moore played the rest of the way after Mahomes hurt his knee on a seemingly innocuous quarterback sneak in the second quarter Thursday night. Moore was rough at times, but the former Panthers and Dolphins quarterback did connect with Tyreek Hill on a long touchdown pass.

Most importantly, he didn't make any major mistakes in what became a 30-6 rout.

"He works extremely hard at it," Reid said. "He doesn't get a lot of reps in practice. He stands in the back and goes through all the different motions as if he's actually playing there. As well as you can be prepared, he does that without being the starter."

Moore has been on a whirlwind ride since the Chiefs called him ahead of their preseason finale, searching for a veteran backup after Chad Henne broke his ankle. He had been moonlighting as a scout for the Dolphins and a prep football coach when general manager Brett Veach reached out.

Before he knew it, Moore was on the practice field in Kansas City, trying desperately to pick up enough of Reid's intricate and involved offensive system in time for the regular season.

"It's been a short period," Reid said, "but he's digested what we're doing and done it well. He's been around long enough that he's probably seen most of what we're doing."

Moore could have a little extra help against the Packers.

While left guard Andrew Wylie is not quite back from a sprained ankle, Reid indicated that left tackle Eric Fisher and wide receiver Sammy Watkins are day to day with their injuries. Fisher had core muscle surgery a few weeks ago while Watkins has been rehabbing a strained hamstring.

"We'll just see how things go with them the next few days," Reid said.

On the opposite side of the ball, the Chiefs could be without slot cornerback Kendall Fuller for a while. He fractured his right thumb against Houston and did not play at Denver, and Burkholder said Fuller had surgery on Friday in Los Angeles before returning to Kansas City on Sunday.

Reid said his approach with all of those injured players — whether it's the franchise quarterback or anybody else on the roster — will be the same as always: "If you can play, you play. If you can't, you can't, and I expect the next guy to step up and play."