Chiefs quarterback Mahomes has plenty of fans within NFL 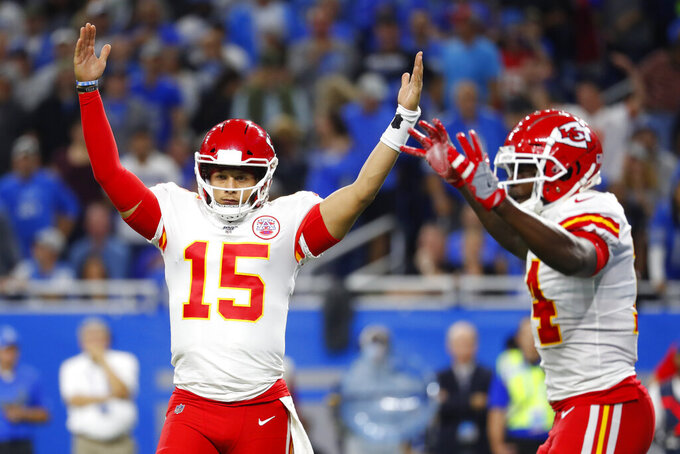 Kansas City Chiefs quarterback Patrick Mahomes (15) reacts after a touchdown during the first half of an NFL football game against the Detroit Lions, Sunday, Sept. 29, 2019, in Detroit. (AP Photo/Paul Sancya)

KANSAS CITY, Mo. (AP) — The popularity of Chiefs quarterback Patrick Mahomes has soared into the stratosphere in just over one season as the starter, each no-look or left-handed passes drawing a fresh chorus of acclaim.

It’s not just the fans that are the fans, either.

“It’s kind of cool to see some of the stuff he does,” said Colts counterpart Jacoby Brissett, who will get to see Mahomes first-hand when his team heads to Arrowhead Stadium on Sunday night. “Hopefully he doesn’t do it this week, but the things he can do with the ball, it’s very impressive.”

So impressive that Brissett even said, rather sheepishly: “You just watch and you’re like, ‘Yeah, I can’t do that.’ But it’s fun to see somebody else.”

It seems just about every coach tasked with slowing down the league MVP, or defensive guy forced to make a play against him, is simultaneously challenged and in awe by what Mahomes can do.

That’s not exactly common in a league predicated on one-upsmanship, where players by their very competitive nature are often unwilling to admit that somebody else is better than them.

“He’s legit,” said Ravens defensive back Brandon Carr, who had just watched him slice up the Baltimore secondary. “He leads the team. He can make all the throws. He’s confident. He gets the ball up and down the field. And he can extend plays with his legs. He’s an elite quarterback.”

Raiders cornerback Lamarcus Joyner was just as blunt _ and effusive _ in his appraisal after watching Mahomes lead the Chiefs to a victory in Oakland.

“He’s a hell of a quarterback,” Joyner said. “He’s arguably the No. 1 quarterback in the league. He got a little Tom Brady to him, a little Drew Brees look, Philip Rivers. He’ll challenge you. He can make the throws, he can scramble around, so I mean, you have to cover guys a little bit longer.”

There have been guys like Mahomes over the years that have garnered such respect from their play on the field and persona off it that even their biggest rivals can’t help but applaud. They tend to go down in history as larger-than-life characters, a unique combination of talent and personality.

Joe Namath was that way back in the 1960s and 1970s, when Broadway Joe brashly predicted a Super Bowl triumph for the Jets, briefly owned a New York nightclub and made so many ladies swoon.

Steelers defensive star Joe Greene was that way in the late ‘70s, too. His nickname “Mean Joe” was contrasted by that broad smile in his famous Coca-Cola commercial, making him thousands of fans far beyond Pittsburgh. And with four Super Bowl rings, there was no disputing his success.

Then there was Walter Payton, who was so popular among fans and rivals alike that the Man of the Year award carries his name. Sure, he was the record-setting running back of the Chicago Bears, but he also exhibited such “sweetness” that even Packers and Vikings fans usually respected him.

Mahomes is following the same road toward popularity.

He’s doing it faster than usual, too.

The other thing that Namath and Co. had in their favor was longevity. They plied their trade at the highest levels for years on end, and Mahomes has only been in the NFL crosshairs for 18 months.

“He’s a unique talent,” Colts coach Frank Reich said. “He’s fun to watch, I’m not going to lie. Last week when we were playing the Raiders, I was watching a lot of Kansas City’s offense against them and he made a couple throws that you just shake your head and you say, ‘How do you do that?’ So we respect that. And like I’ve said before, I also respect who he is off the field. I think it’s great for the league when you’ve got players that are that good but also are really pros on and off the field.”

Notes: WR Tyreek Hill (collarbone) and RB Damien Williams (ankle) continued to practice on a limited basis Thursday. It remains unclear whether either will play against the Colts.