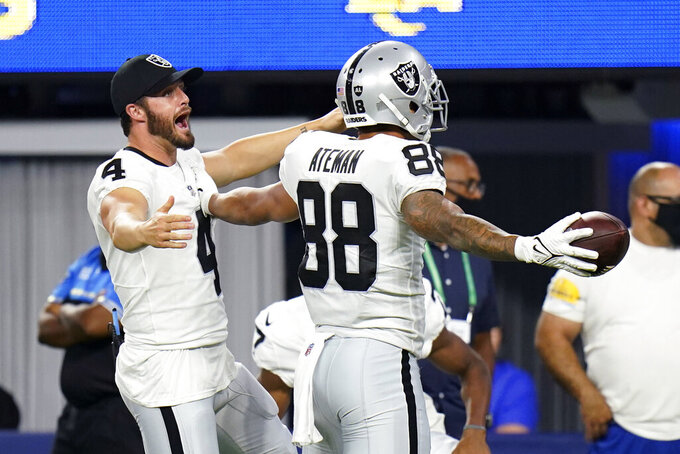 Overhauls are usually reserved for bad teams that miss the playoffs, not ones that play in consecutive Super Bowls.

Chiefs general manager Brett Veach, however, was impelled to dismantle his offensive line after watching Patrick Mahomes run for his life in Kansas City's 31-9 shellacking at the hands of the Buccaneers in the Super Bowl.

The Chiefs were 3-point betting favorites to defend their title but injuries and opt-outs forced them to use a makeshift group, which was promptly steamrolled. By one calculation, Mahomes ran around for nearly 500 yards while trying to escape the Bucs' relentless pass rush and find an open receiver.

He traded for Ravens left tackle Orlando Brown Jr. and signed former Patriots left guard Joe Thuney, the first player in NFL history to start in the Super Bowl in each of his first three seasons.

The rest of the line hasn't ever played in the NFL. Center Creed Humphrey and right guard Trey Smith are rookies and right tackle Lucas Niang opted out as a rookie in 2020 because of COVID-19 concerns.

“We’ve come together fast,” Niang said. “We’ve got a ways to go, but we’re doing a good job. Everybody’s communicating, getting on the same page.”

“I mean obviously they’re all really talented,” Mahomes said. “ ... When everybody is on the same exact page is when you have those truly great offensive lines and great offenses.

“I think you see us as games are going on, we’re communicating better and better and I think we’ll continue to improve throughout the season.”

All the other familiar names are back — Travis Kelce, Tyreek Hill, Clyde Edwards-Helaire — along with an improved defense, making K.C. the favorite for a sixth straight AFC West title and maybe a third consecutive trip to the Super Bowl.

No team has ever won six straight AFC West titles, and the division is tougher than it's been in a half decade. Both the Chargers and Raiders split with the Chiefs last season and the Broncos sport their deepest roster since winning it all in 2015.

Von Miller says Denver finally has the roster like the one he led to a championship parade five years ago.

That will require big bounce-backs by Miller (ankle), WR Courtland Sutton (knee) and new QB Teddy Bridgewater, who went 4-11 in Carolina last year and beat out Drew Lock this summer.

By all indications, Brandon Staley had a successful first training camp as Los Angeles Chargers coach. The Bolts didn’t sustain any major injuries during training camp — something they could not say the past two seasons. Staley also stole a page from former boss Sean McVay and didn’t play most of his starters, including quarterback Justin Herbert, during the preseason.

Herbert, the reigning AP Offensive Rookie of the Year, quickly became one of the top young quarterbacks in the league last season, setting a rookie record with 36 TDs.

On defense, all-purpose safety Derwin James’ return after missing last season (knee) gives the unit a big lift. James will call the plays and line up all over the field.

The Raiders are hoping offseason changes can boost a defense that allowed the most points per game and second-most yards per play in three seasons since coach Jon Gruden returned.

Defensive coordinator Paul Guenther was fired late last season and Gus Bradley was brought over from the Chargers with a simpler system that should allow the Raiders to be more aggressive.

The defensive line should be better with Yannick Ngakoue teaming with Maxx Crosby on the edge but questions still remain in the secondary.

Last year, the Raiders flaunted the NFL's COVID-19 protocols more than any team, getting fined $575,000 over the first month of the season for breaking the rules, from Gruden wearing his face mask like a chin strap to players appearing at a function where face coverings weren’t used nor social distancing observed.

This year, the Raiders became the first NFL team to require fans to provide proof of COVID-19 vaccination to attend home games without a mask at their gleaming new Allegiant Stadium, where fans weren't allowed last year.

“Health and safety has always been our No. 1 priority,” Raiders owner Mark Davis said in a statement.

Players are not required to be vaccinated against COVID-19, but the NFL has reported that more than 90% of them are. The league has said outbreaks among unvaccinated players could lead to forfeits in 2021.