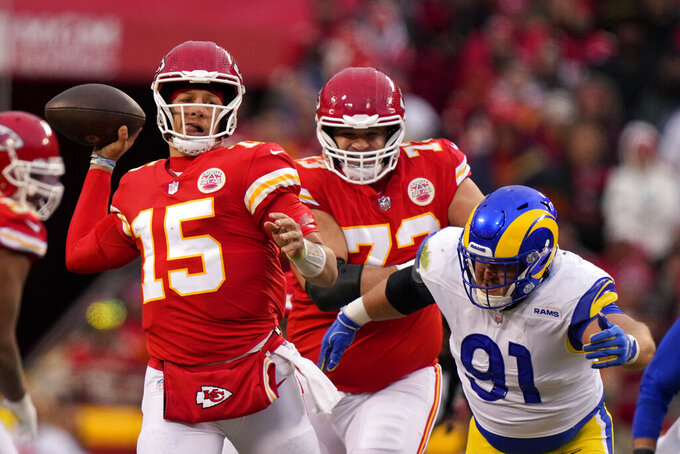 So much for celebrating a 26-10 victory Sunday over the beat-up Los Angeles Rams.

Sure, the Chiefs were pleased by Mahomes throwing for 320 yards and a touchdown, and the hard yardage Isiah Pacheco gained on the ground eventually netted him a score. And they were thrilled with the performance of their defense, which frustrated fill-in quarterback Bryce Perkins and shut down the Rams ground game.

But the Chiefs also made plenty of mistakes, including an interception by Mahomes in the end zone in the fourth quarter — that dumb play he referenced — and red-zone woes that led to four field goals by Harrison Butker.

“Got to do a little better in the red zone. That's a place where we're normally pretty good,” Reid said. “We were off a tick tonight. We'll get back to the drawing board and take care of that.”

It didn't matter against the Rams, who have lost five straight for the first time under Sean McVay.

It might matter against the Bengals next week. And down the stretch in the pursuit of the AFC's top seed.

“You like the win but we have a lot to get better at,” Mahomes said, “especially me.”

Still, the Chiefs (9-2) have won six of the last seven against Los Angeles, and they exacted a measure of revenge for that lone defeat, when then-Rams quarterback Jared Goff threw a late TD pass to win a 54-51 thriller in November 2018.

Playing without Matthew Stafford, who remained in the concussion protocol, the Rams (3-8) struggled to move the chains behind Perkins, a career backup making his first start. He made a couple of nice plays with his legs but threw for just 100 yards with a touchdown pass and two interceptions.

“It’s hard to say that you’re running anything that resembles anything close to your offense and what you envisioned it to be,” Rams coach Sean McVay said. "There’s a lot of challenges based on what guys know and their skill sets.”

The Rams' losing streak and their record through 11 games matches the 1987 Giants for the worst among defending Super Bowl champs, though New York's dismal start came amid a strike resulting in the use of replacement players.

The Rams certainly looked like a team playing without its starting quarterback, top two wide receivers and two starting offensive linemen — all out with injuries Sunday. They scrapped just to get positive yardage on every snap, and that's only when they managed to get the play off in time or didn't have to waste a timeout.

The Chiefs didn't penalize them early for their many miscues, though defensive tackle Chris Jones did pick up his 10th sack of the season, triggering a $1.25 million incentive. Kansas City instead marched methodically down field only to twice settle for field goals, leaving the woebegone Rams surprisingly within 13-3 lead at intermission.

“We have to finish in the red zone,” Smith-Schuster said, “That's one of the biggest points.”

The Chiefs nonetheless had 277 yards of offense at that point. Los Angeles had 75.

Any hope the Rams had evaporated on the first two possessions of the second half, when they went three-and-out and Mahomes and Co. answered with a 71-yard scoring march. And this time, rather than the drive fizzling and Harrison Butker swinging his leg, Pacheco bulldozed into the end zone from 3 yards out to give Kansas City a 20-3 lead.

The Rams finally reached the end zone in the fourth quarter. The Chiefs added two field goals to put the game away.

“Early on, throughout the game really, we had some shots. We were moving the ball. There were some little things here and there that didn't go our way,” Perkins said. “The guys did a great job up front. We have some things to clean up.”

Rams WR Allen Robinson II will have surgery to repair a stress fracture in his foot and miss the rest of the season, McVay said after the game. The injury was found in a CT scan taken Friday. Robinson signed a $46.5 million, three-year contract in the offseason, but he wound up catching 33 passes for 339 yards and three touchdowns in 10 games this season.

The Rams play Seattle next Sunday to begin a two-game homestand.

The Chiefs visit Cincinnati on Sunday for the first of three straight road games.