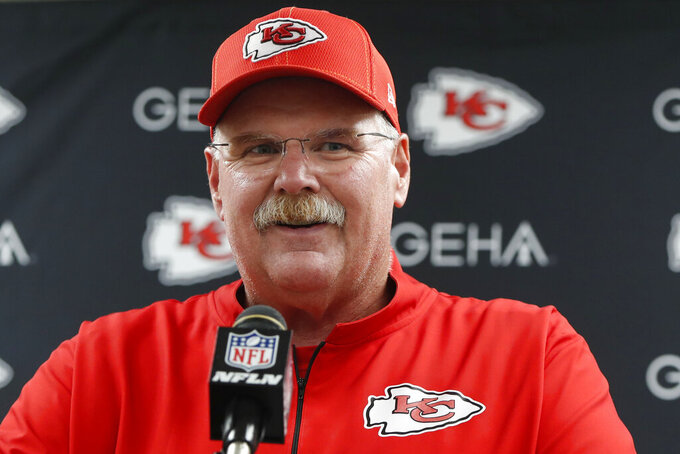 KANSAS CITY, Mo. (AP) — If Patrick Mahomes had his druthers, the Kansas City quarterback would be on the field from the first snap to the last when the Chiefs play San Francisco in their third preseason game Saturday night.

Not likely, of course. But potentially not far off.

That's because Chiefs coach Andy Reid continues to take an old-school approach to using starters during the preseason, rather than protecting his guys from the potential for injury — the trend that has been developing league wide. So, he generally plays the No. 1 units into the second quarter of their second tuneup and the starters into the second half of their penultimate exhibition game.

"I've kind of stayed on the same schedule I've been on," Reid said. "I always fluctuate it just a little bit. It's normal that I give guys the same time and I evaluate off of what I see."

Indeed, the Chiefs were so efficient offensively in their preseason opener against Cincinnati that Mahomes got just a single series. They struggled a bit last week against Pittsburgh and got a few more reps, though it still left the reigning league MVP wanting more.

Mahomes figures to get it against the 49ers on Saturday night.

"We've been on the right plan with what we've been trying to do," he said. "We've moved the ball and then we've had drives where we don't move the ball. It's about going out there and figuring it out on the fly and being able to have that game-like experience, and I feel like we've gotten that so far."

They've gotten it safely, too.

The biggest losses for the Chiefs all preseason have been cornerback Keith Reaser, lost for the season during a training camp workout, and wide receiver Marcus Kemp, who tore his ACL during their game against the Steelers and went on injured reserve this week.

Other teams haven't been nearly as fortunate.

The Saints lost linebackers Vince Biegel and Craig Robertson, defensive lineman Mario Edwards Jr., and offensive linemen Chris Clark and Michael Ola in their preseason win over the Chargers. None of them is as crucial as Drew Brees or Michael Thomas, but the injuries nevertheless were a blow to depth.

Sure, many high-profile injuries this preseason have happened during practice and intra-squad scrimmages — the Bengals' A.J. Green, for example. But it goes without saying that the risk of injury is greater in the less-controlled setting of a preseason game, where guys may not necessarily be fighting for a win like they would in the regular season, but could instead be fighting for a job.

"It's a physical game," Reid acknowledged, "but I've had success doing it this way and I'm not complacent. ... We will probably come out of (preseason games) with one or two guys who are hurt for the duration, but that happens. You're seeing a lot of these major injuries happen in practice and, knock on wood, we've kept it out of that. So, things happen."

In Reid's mind, the positives of playing in preseason games outweigh the negatives: The games more closely resemble a regular-season game, giving a coach a more realistic picture of a team.

"You need that," Reid said. "You just need to kick it up a notch. It's not as fast as what you're getting in the regular season, but you're cranking it up and it's the next step."

Chiefs safety Tyrann Mathieu hurt his shoulder in last week's game against Pittsburgh, though the injury was not serious. He was back on the practice field this week. But he also acknowledged the value of playing deep into preseason games, particularly when Kansas City has a revamped defense.

"I think that's important," Mathieu said. "It helps everyone to get in sync."

Mahomes hopes to play into the second half Saturday night, and that appears to be the plan. But he also knows that Reid could deviate from it at any point, so it doesn't make sense to worry about it.